Being a Deaf Turkey Hunter Is Hard. Watching My Son Call in His First Turkey Makes Up for It

Turkey hunting looks a lot different when you can’t hear: It affects everything from locating birds to communicating with your hunting buddy. Fortunately, my 9-year-old is handling the calling 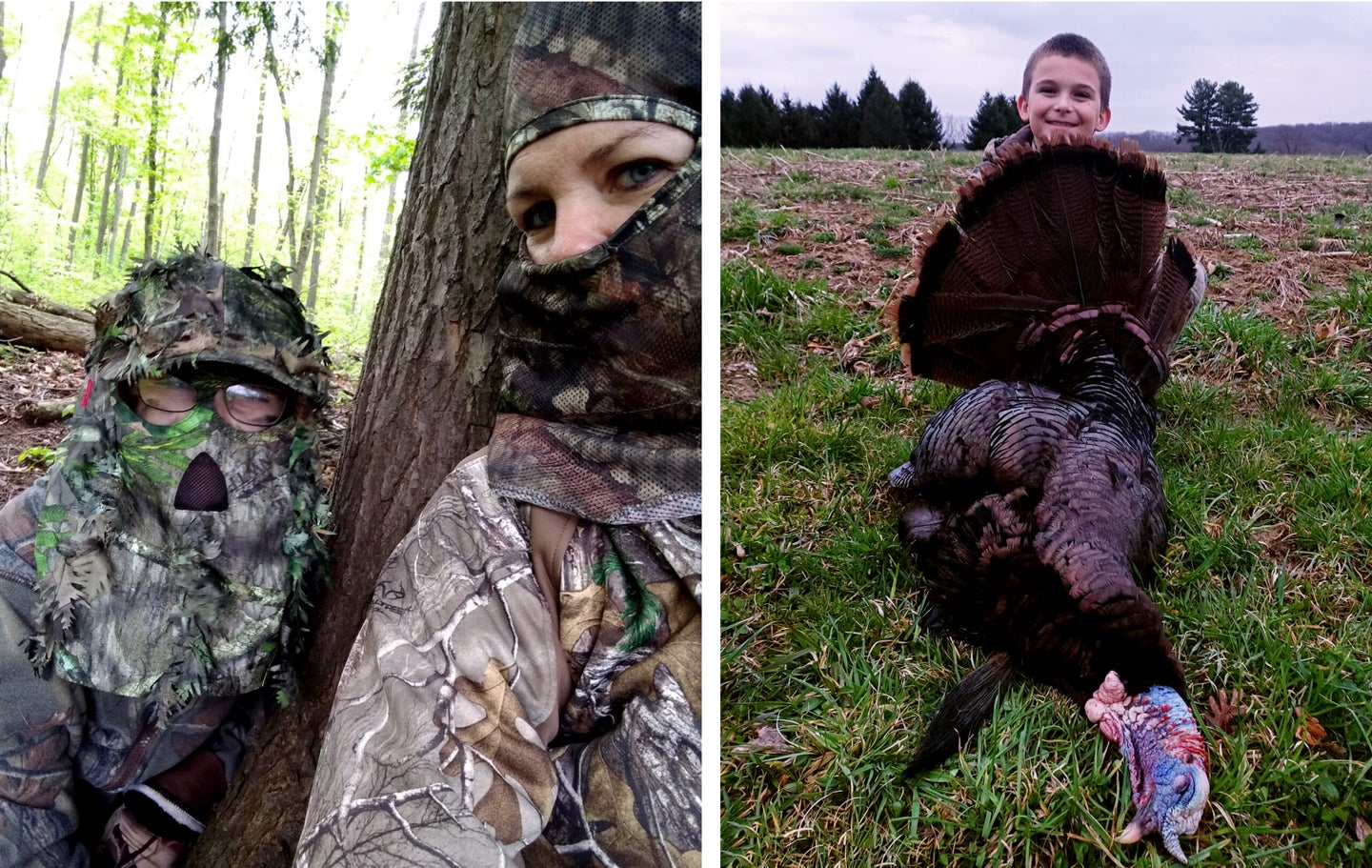 The author and her son last turkey season (left); Grant with the gobbler he called in himself. Brooke Rumbaugh
SHARE

I’ve hunted for more than 10 years and have never shot a turkey. I’ve also never heard a gobble. I was born deaf, but I can speak and read lips. So, I can see my 9-year-old son, Grant, practicing making different animal sounds, such as bull elk bugles and whitetail buck grunts (he has done since he was tiny). I am not sure, however, what his animal calls actually sound like.

For his first turkey hunt with me, he said he was going to make hen yelps with his own mouth (no call needed) to bring in a gobbler. Even though the Easter Bunny had just brought him a nice box call, I figured I’d give Grant a chance to call one in with his own voice. After all, it was his hunt.

Before daylight, Grant and I headed to the woods, and settled into a spot behind our house. Grant carried the decoys and I carried the shotgun. He picked out a tree about 10 yards from the edge of a field, near the corner of our property and the neighbor’s. The tree was big enough for both of us to lean against—it was the perfect spot. He then set up the decoys, one hen and one gobbler, over to the side of our field about 25 yards away.

Some turkey hunters go out the night before to listen for gobbles and roost birds. This is not an option for me. But Grant said he did see a gobbler a few hours before dark the night before. We were hopeful.

Just after 6 a.m., I whispered to Grant that maybe we should have had the blind to sit in. He was having a hard time keeping still, just like any other 9-year-old might. But soon enough I put those thoughts out of my head and was content just sitting there in deafening silence, watching the rain and enjoying having my little boy at my side (though he’s not really so little anymore). We were just taking in the nature around us.

About 20 minutes later, I looked over the hill above us and saw movement in the field. It was a hen. I sloooowly moved my left arm to point to Grant. “There’s a turkey up there.”

He was looking in a different direction where he had heard a gobble, and hadn’t seen her. We both had camo face masks on, and he knew he couldn’t reply since I wouldn’t be able to read his lips with the mask on. So, he kind of nodded his head slowly to let me know he saw her now. About a minute later, two more turkeys came into view right behind her: a jake, and a longbeard strutting behind him. All three were walking straight past us—only they were about 60 yards away.

As I watched, I was thinking, Be patient. Be patient, Grant. I knew they weren’t close enough for him to shoot. Luckily, the gobbler decided to turn toward us and strutted into range. Either he was responding to Grant’s calls or he saw the decoys—or both. I was in awe.

Suddenly I felt the vibration of the gun going off. My eyes closed for a split second with the force of the shot and, as I opened them, I saw the bird flopping. Grant had hit him, and he took off running toward the bird. By now, Grant had taken his face mask off, and I saw huge smile on his face as I approached. I watched his lips form the words, “I got him, Mom! I got him! I cannot believe it!”

He gave me a fist bump (I must still be cool enough for him to give me a fist bump) and then he said he had heard four or five gobblers around us. But the tom he shot hadn’t gobbled at all. I was so happy and excited for him. I hugged him and joked that’d he’d have to call one in for me now. And sure enough, later that season I ended up killing a tom myself—my first ever.

But if I’m being honest, I’d always rather have Grant get a bird. The feeling of his gunshot beside me and the reaction I saw from my son is something I’ll never forget.