Spring Turkeys Are the Gateway Hunt to Western Big-Game Adventures

If you've been dreaming of a big-game adventure in the West, skip the lotteries and guides and start with a spring turkey hunt 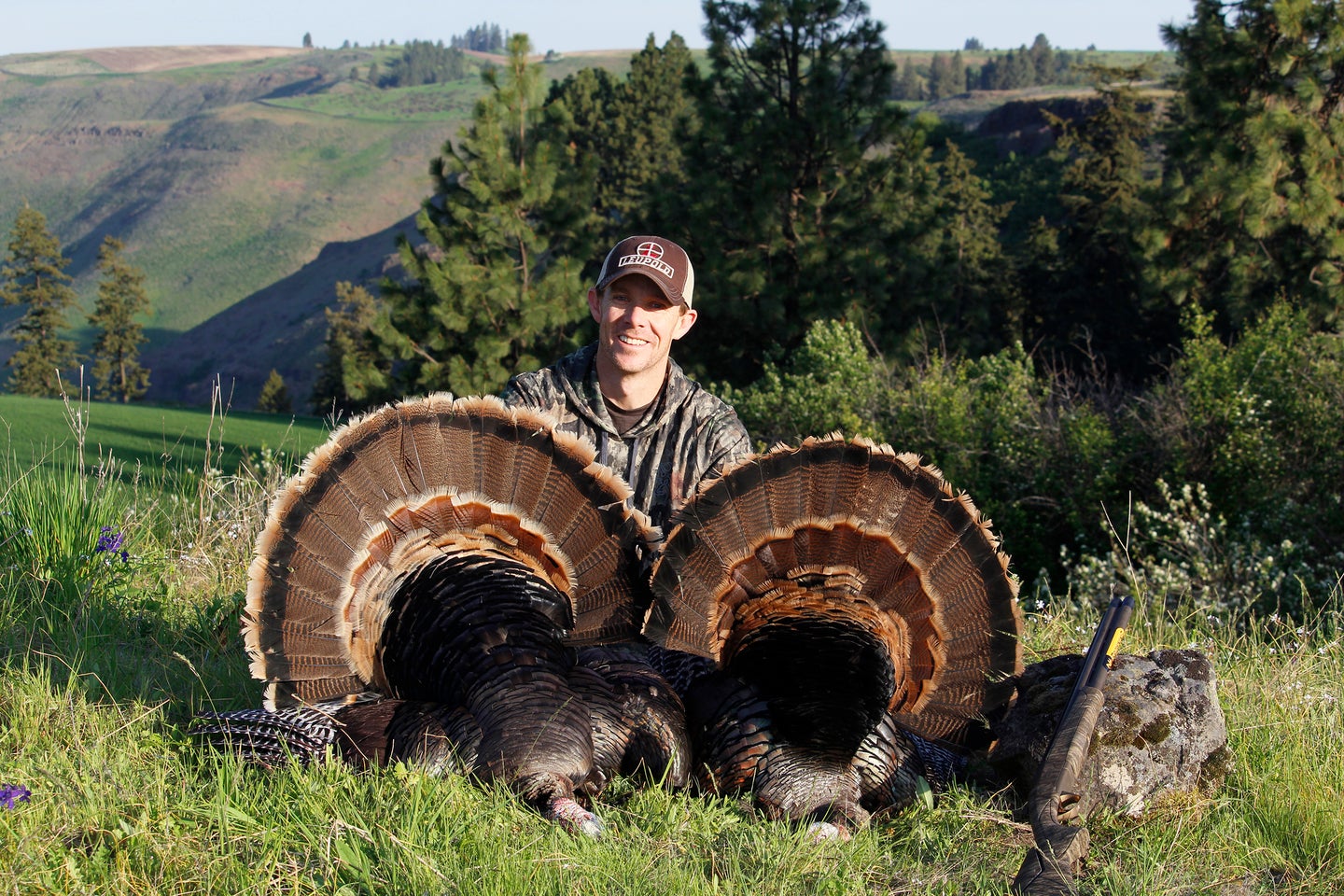 If you’re a whitetail and turkey hunter living east of the Mississippi, I bet you’ve done at least a little daydreaming about a Western hunting adventure — the wide-open landscapes, towering mountains, and roaming herds of critters. Maybe that daydreaming has turned into a little research. You’ve done some digging online only to realize that finding an affordable, high-quality hunt for big game in the West is actually pretty dang complicated. In some units, thanks to point creep, pulling a tag can be like pulling teeth.

But don’t give up just yet.

Coming West is easier and less expensive than you might think if you make a springtime turkey hunting trip. The West is chock-full of turkeys, tags in most places are sold over the counter (and they are generally much cheaper than elk or mule deer tags), and this springtime road trip will help you learn about Western hunting in general. You’ll gain intel for future elk or mule deer hunts, plus you might just have the best turkey hunt of your life.

Idaho wasn’t dubbed the Gem State because of its thundering springtime gobblers, but it certainly is the gem of Western turkey hunting. First introduced in the 1960s, turkey populations have climbed above 30,000. The Rio Grande subspecies is the state’s most common turkey, though in some areas you’ll encounter Merriam’s and Eastern gobblers. General season tags are sold over the counter, and nonresident hunters can snag a turkey and “extra turkey” tag for $88. The two-bird limit is a nice bonus if you’re making a long drive West. There are hundreds of thousands of acres of national forest in the state’s Panhandle and Clearwater Regions where turkey populations abound, so there’s plenty of room to roam. Idaho’s 2022 General Turkey Season will run from April 15 through May 25.

Colorado has a lot more turkeys than turkey hunters, which is excellent news for those making a Western road trip. Most springtime visitors to the state are hunting trout, not gobblers.  Over half of the state’s game management units offer over-the-counter hunting. While populations of Rio Grande turkeys exist along the eastern river and creek corridors, most turkey hunters come to Colorado for mountain Merriam’s birds. These nomadic wanders inhabit the same terrain as mule deer and elk. They and can be found just below the snow line eating newly hatched bugs and fresh shoots of green. Focus on areas of national forest — of which there is no shortage — that has large stands of ponderosa pine and open meadows. Fringe areas like cedar-dotted canyonlands are also turkey hot spots. The 2022 Spring over-the-counter season runs from April 9 through May 31, and a nonresident tag costs $160.67.

Montana, like Colorado, has a healthy Merriam’s population and is loaded with public land. Most areas across the state are slugged under the state’s “General Turkey Hunting” label, which means hunters can purchase a tag over-the-counter. Season dates are April 15 to May 31. The state’s current turkey population is estimated at 120,000 birds strong. With a combination of national forest, BLM, and over 8-million acres of Block Management land, you won’t have difficulty finding places to chase toms. Don’t overlook Montana’s Block Management Program. This cooperative effort between private landowners and Montana Fish, Wildlife, and Parks has created excellent public hunting opportunities on private land.

How to Digital Scout for a Western Turkey Hunt

Chances are you won’t be able to make a scouting mission before you head out for your hunt. The good news: You don’t have to. Most Western states have beefed up their online turkey info, and if you take an hour and visit the game and fish website of the state you plan to hunt, chances are good you’ll find a turkey distribution map, how-to-hunt tactics, and plenty of tips to get you started. From there, make some phone calls. Most Western game and fish agencies have excellent customer service that will be able to point you toward an area or state biologist who can help narrow your search.

If you’re hunting mountain birds, look to public areas that butt up to private lowland tracts early in the season. Birds congregate in mountain cattle pastures and ag fields during the winter but will start moving up into the mountains as the days get warmer and the snow melts. A prominent ponderosa-lined ridge that gives way to a grassy meadow is always a key feature to keep an eye out for. The heads of small canyons and drainages are also typical turkey hangouts. Like big-game animals, mountain turkeys need food, water, and cover.

Late in the season, especially after public-land birds have been chased hard by hunters, look at higher elevations and areas that require a long walk from an access road or trailhead. Both Merriam’s and Rios can live in rocky, daunting terrain. Don’t overlook ski slope areas on national forest land. I’ve killed many late-season gobblers that found sanctuary on grassy slopes near the top of a black diamond ski runs.

If you’re chasing birds in the cedar canyonlands, look for isolated pockets of cottonwood trees along river corridors. Roosting spots in the canyons are limited, so when you find cottonwoods — especially cottonwoods surrounded by open sage and cactus flats where birds can feed and strut — you’re in the money.

You can find all these terrain characteristics on digital mapping apps like onX or Huntstand. Narrow down the area you’re hunting and then drop pins on your digital map. On the first morning (or evening) of your hunt, start at you most promising waypoint, and then go wherever the gobbles take you.

Read Next: How to Hunt High-Country Turkeys

The biggest Western turkey chore can be finding birds to hunt. The West is enormous, and birds are nomadic critters, especially the Merriam’s subspecies. When I arrive at my hunt area, I first drive any four-wheel-drive access roads. Check snow patches and muddy spots in the roads for tracks, and keep an eye peeled for droppings as well as wing and tail feathers. It’s not uncommon for mountain birds to roost right off a well-traveled road early in the season. I also recommend gaining a vantage point from where you can glass open meadows. Stay quiet while glassing so you can hear distant gobbles. Mountain birds gobble often, and this is often how I find birds to hunt. Another good scouting tip is to hammer away on a hawk screech locator call. This call carries well, even in windy conditions.

You’ve likely heard that Western birds are easy to fool — that they’ll come running to even the most hideous calling. None of that is true. However, Western birds are much more spread out than birds in the Midwest and East. Toms are used to walking miles and miles in search of a hen, and for this reason they tend to sound off often and will respond to a call from a long way off. Unless you know birds are close, don’t be afraid to grab a raspy box call and let the good times roll. When it comes to locating a tom, you can’t get too loud. I once glassed a tom from more than 1,500 yards away two seasons back. He was alone and strutting back and forth across an open meadow. When I yelped and cut on my box call, I couldn’t hear him gobble, but I could see him toss his head forward and hammer in my binoculars. In just 23 minutes, that tom closed the distance to 12 yards. Turkey calls were made to be played loudly in the West. Remember that.

Be ready to burn some boot leather. Many times, a mile walk up and over a mountain has flipped a sub-par turkey hunt to a memorable outing. However, if you locate areas full of tracks, strut marks and dusting spots, then find a good hide and start calling. There are times to walk about and times to stay patient and call. Western birds cover lots of ground, and if you’re in an area they want to be, chances are good that a tom will show up. The key is committing to a spot for a long enough time.

You will want decoys, especially when setting up in open areas. However, toting full-body fakes across miles of the terrain is hard work. I prefer inflatable Avian-X decoys — a laydown hen and 3/4-strut jake will do. When I’m 100 percent sure other hunters aren’t in the area, I’ll use a Heads Up Decoy Strutting Turkey. This is a reaping-style decoy and works well on Western birds. Always keep safety in mind when using any decoys on public land.

My last tip for new Western turkey hunters: Cattle are your friend. You’ll find them grazing public-land mountain meadows and sage flats during the spring and turkeys love to peck and scratch through cow piles. I’ve had some fantastic hunts in areas where cows are feeding.

READ NEXT: How to Get Into Backpacking Shape for Western Hunts

Turkeys are Just the Beginning

Start researching and planning your adventure and let your first Western turkey hunt lead you to more big-game hunting adventures in the future. The skills you’ll learn from a Western turkey hunt, like how to research units, navigate rugged public lands, and glass for game in wide-open country are the same skills you’ll need on any Western big-game hunt. But the beauty of it is that the stakes are much lower. If your turkey hunt doesn’t work out the way you hoped, just chalk it up to a learning experience. On the flip side, you don’t want to spend years applying for a hard-to-draw elk tag, finally draw it, and then have to rush to learn all the intricacies of Western hunting with your dream hunt on the line.

On your Western turkey hunt, you’ll undoubtedly find places you’d like to revisit in the fall to chase elk or mule deer. Research those units using the same methods you used to plan your gobbler hunt. With a few seasons under your belt and plenty of miles on under your boots, you’ll be ready to take on any big-game hunt in the West.