Elk on the Cheap

On a budget? Do-it-yourself tips to hunt elk—when you didn't think you could afford to. 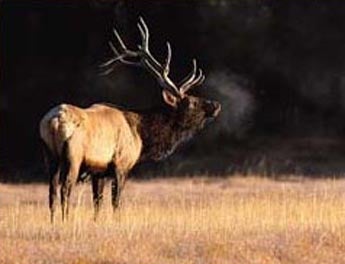 Creaking leather and a pack-string winding, anaconda-like, up the trail. White-wall tents under an October moon. Buy it if you can, and as frequently as you can. There’s nothing like an outfitted elk hunt in the Rockies.

If your 401K is now a 201K, or if your kid needs more cash for college, however, you might be heading to the hills after elk this fall the way I am: on your own. As long as you go prepared, it’s still a pretty good option.

Where the Bulls Are
The first thing to remember about elk is that they’re mobile. The second is that most of them live in big, steep forests. If you can’t move easily where elk go, you’ll see them only if you’re lucky. Get in good physical shape with regular aerobic exercise. Try 30 minutes of brisk walking daily to start. Jog, bicycle or use a treadmill or stair-stepper an hour every other day to build your legs and lungs.

No matter how fit you are, you can’t carry as much as a horse can. Outfitters take pack-strings farther than you’ll want to go, and they commonly meet outfitters coming from the other direction. During elk season, the most crowded places in wilderness areas are often near the middle, as far as horses can get from a road. Fortunately for you, elk figure this out pretty quickly and drift to what I call “in-between places.” These coverts lie just beyond easy reach for day-trippers but short of the high-country horse camps. The last three bulls I’ve killed have come from such sanctuaries.

One of these elk met his end a short rifle-shot above a pack trail frequently used by hunting outfits. Another fell within sight of a highway, the third in a burn next to a fire road. These places had plenty of grass, slopes severe enough to discourage casual hunters and nearby conifer jungles that promised quick escape routes. Incidentally, I tagged all three bulls on federal land open to public hunting.

Scout or Study
How do you find such honey holes? I pay my dues by spending a lot of time in the woods, looking and listening for elk. If you don’t have the opportunity to scout much, you’ll do remarkably well by studying United States Geological Survey (USGS) maps. Order a free index map from P.O. Box 25286, Denver, CO 80225; then buy quadrangles that cover the area you intend to hunt. Look for mid- and high-elevation benches (wide spacing between contour lines) at least a mile from major thoroughfares.

Green on the maps indicates tree cover; elk like a mix of trees and openings, and easy access to timbered north slopes that provide dense security cover and cool bedding sites. North slopes generally hold more free water as well-a bonus for elk. I pay attention to places that might funnel elk routed by other hunters: timberline saddles between drainages, necks of forest between big meadows, a bench connecting conifer patches on a steep face. Once you’ve targeted the spots you’d like to hunt, phone a local U.S. Forest Service (USFS) office to confirm road closures and travel conditions. Ask if any fires have occurred there in the past three years. Canopies opened by fire allow various types of grasses to sprout, drawing elk.

Devise a Plan B. When it’s your turn to hunt, you might discover that another hunter has beaten you to your chosen area. Forest roads you’d counted on to bring you to trailhead might be under emergency fire closure. Grazing livestock could move elk into another drainage. Be flexible. Assemble USFS and USGS maps for two elk camps; laminate the maps so they’ll endure wet weather.

[pagebreak] Camp Concerns
If you’re overnighting near where you hunt, position your camp under tree cover, near water and away from where you expect to find elk. Elk will avoid camp commotion, often moving far enough to take them out of hunting range. I set my tent well below likely feeding areas so thermal drag at night will carry my scent away from foraging elk. Inamp, it’s smart to keep noise and flashlights down.

Get up early, and climb in the dark to where you can see far and move quickly in any of several directions. Unless there’s human traffic on ridges, elk generally climb to bed. Be near the top to intercept, but stay off the skyline. As the sun warms surface air, the air lifts, reversing thermals and keeping the drag to your face as you descend on a target animal. I like to still-hunt 100 to 200 yards off a crest, glassing for patches of tan hide below.

Success hinges on your ability to recognize promising places and to hunt them efficiently. Make the most of those magic dawn and dusk hours, probing the edges of the thickets, looking close as well as far with your binocular. Move in cover rather than in the open. If one area doesn’t pan out, shift quickly to the next.

Travel Plans
One common failing of do-it-yourself hunters, especially those from the East, is their inability to move fast. They’ve been taught to ease along, as indeed you must in prime cover. But unlike whitetails, elk are herd animals. They live in vast forests, not woodlots. And elk densities aren’t as great as deer concentrations in farmlands. That means you might find no elk for days or stumble upon dozens in the first meadow you check. Between promising coverts, you’ll find lots of country unlikely to hold elk. Walk through it quickly. If you spot elk moving in the distance, close the gap immediately. I’ve often run on the initial approach. Sneak and peek when you must, but use high gear when you can. Travel on routes elk use. The going is generally easier, and elk expect to hear noise on these paths anyway, so you’re not likely to put them on high alert.

If you’re a good caller and have confidence in your ability to duplicate elk sounds, go for it. I don’t call elk, even when they’re in rut. While many hunters call successfully, I’m not an expert with either a bugle or a cow call. And I’ve seen skilled callers fail to bring bulls from their cows, particularly in pressured areas. I prefer to play the silent predator, keeping myself off the elk’s radar screen until the shot. I still-hunt diligently in light, windless rain that often brings elk out to forage.

Creature Comforts
To maintain your energy, you’ll need rations. For day trips, I carry apples, bagels, raisins and cheese in plastic sandwich bags, plus a pint of water. I fill the bottle from springs and streams near their source; after years of experience drinking their waters, I have confidence in their cleanliness. Use common sense, though. If you fear giardia, carry a water filter.

My lunch goes in a small rucksack with knife, camera, flashlight, rain gear, parachute cord, fluorescent flagging and a compact first-aid kit. There’s room for extra clothes or for those I shed. Weather on top of a mountain can change quickly.

There’s no need to hunt with a pack frame. Leave it at camp or trailhead. If you get an elk and have no access to a horse, there’s time enough to fetch the frame. You can haul antlers and cape, or a quarter, without it.

[pagebreak] Pick Your Shots
Take only good shots. Last fall, still-hunting just under the crest of a rocky ridge, I spied a bedded bull elk at about 350 yards. I could have made the shot, I think. Instead, I spent the next hour closing to within 90 yards for an easy one-shot kill. The bull I shot before that one gave me no such option, falling at long range as he exited the far side of a herd. But the three elk I killed before him died within 100 yards of my rifle. Despite what you might read, elk can generally be approached within iron-sight range. That’s assuming you have practiced at the range. Long shots often miss or cripple. Guiding elk hunters, I found that beyond roughly 200 yards, the probability of a first-round kill diminished to about 50 percent. Rifle, cartridge and bullet don’t count for as much as good judgment and hits tight behind the shoulder.

Hunting elk on your own won’t deliver the white-wall tent memories of a guided Rocky Mountain expedition, but it can be a marvelous adventure-and every bit as successful.

Elk Scouting Tips
Pay attention only to very fresh elk sign. It doesn’t matter where the animals have been; you want to go where they are now. Listen-elk are big and gregarious, and therefore noisy. Sniff the wind. I often smell elk before I see them. Remember, though, that elk beds can reek for hours after the animals have left. Also, bear in mind that post-rut bulls will pull away from cows and sequester themselves where they can rest and eat undisturbed.

Following elk sign to herds after early October is never a sure thing. In fresh snow, I track elk, moving fast and to the side to avoid detection. When the prints show the animals slowing or dispersing, I throttle back. Elk spread out to bed. They’re adept at covering all approaches with their keen eyes, ears and noses.

No matter your technique, persistence pays. Many elk are killed well into the season. Among the dozens of elk I’ve shot, only three bulls were taken on opening day.

Most Popular Game in the U.S.

Hunting elk on your own won’t deliver the white-wall tent memories of a guided Rocky Mountain expedition, but it can be a marvelous adventure-and every bit as successful.