Iowa: Land of the Giants

When it comes to record-book bucks, no other state is producing like this. 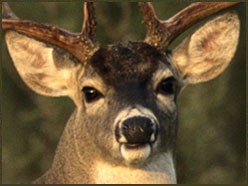 TROPHY BUCKS GALORE
Iowa has become a champ at producing huge whitetails. According to deer experts Mickey Hellickson and Larry Marchinton, hunters in Iowa and Illinois are currently harvesting more Boone and Crockett Club whitetails than those in any other state. Add Minnesota and Wisconsin, and the four states combined boast an incredible 44 percent of all trophy whitetails in the B&C; book (1,233 out of 2,796).

WHY IOWA?
Conservation Reserve Program (CRP) lands may be the key. According to Hellickson and Marchinton, record-book entries increase as the amount of idle land increases. Al Farris, administrator of the Iowa Fish and Game Commission, says that bucks have learned how to hide in the tall grass of CRP lands. He claims they’ll bed all day in six-foot switchgrass, eluding hunters who are looking for bucks in the timber. Iowa also has a rich assortment of high-quality feed and relatively low winter-kill numbers when compared to more northern states.

Another reason Iowa produces big bucks is because its firearms hunts are held in December, well after the rut. Bucks aren’t as vulnerable at this time, allowing more deer to grow older. Finally, Iowa has a large deer population. As a result, more deer escape hunters, surviving until the next season to produce more massive antler growth.

** HOT COUNTIES **
Boone and Crockett whitetails have been taken in 72 Iowa counties, indicating that big bucks can be found throughout the state. However, a review of the latest record book (Records of North American Whitetail Deer, Third Edition; Boone and Crockett Club) shows that the following eight counties are consistently top producers: Warren, Des Moines, Lucas, Henry, Monona, Harrison, Boone and Jackson.

TOP SPOT FOR B&C; BUCKS
According to Hellickson and Marchinton, Warren County offers the best chance for a B&C; trophy buck. This county had the highest ratio of record-book entries in the U.S. from 1986 to 1990 (the most recent compilation of records), with one entry for every 641 square miles. By the way, this isn’t a rural area. Warren County borders Des Moines, the biggest city in the state, and the county line is just a couple of miles from the Des Moines airport.

HOW TO HUNT IOWA
Residents can simply buy their tags, but nonresidents must apply in a lottery for a limited quota of 5,000 tags. During the 1998 season, 12,000 applicants competed in the drawing. In 1997, there were 8,000 applicants, which shows the enormous increase in interest for Iowa bucks. Applicants must choose one of 10 zones and may apply with four names on each form. The application deadline is early June. (For information, write to the Department of Natural Resources, Wallace Building, Des Moines, IA 50319.)

It’s important to note that nonresident applications are taken only over the phone, and only with a credit card (MasterCard or Visa). There are no exceptions. Fees are $25 for residents, $150.50 for nonresidents. (To apply, call 800-367-1188. That number may change next year, so check with the DNR for updated information.)

** PARTY-HUNTING WOES**
Iowa is one of a handful of states that allow party hunting. According to Farris, one hunter can shoot a dozen or more bucks, provided the hunters who tag the deer are present during the hunt and tag the animal no more than 30 minutes after it’s down. Be aware that the Boone and Crockett Club does not allow a buck taken by a party hunter aand given to another hunter to be officially measured by either hunter. In other words, if Jack shoots a big buck and puts his tag on it, the deer is eligible for B&C; consideration. But if Jack shoots another buck and legally gives it to Harry, neither Jack nor Harry can enter the buck. So think twice about letting someone else use your tag for their deer. You may forfeit an opportunity for your own trophy once all the tags in your party are filled.