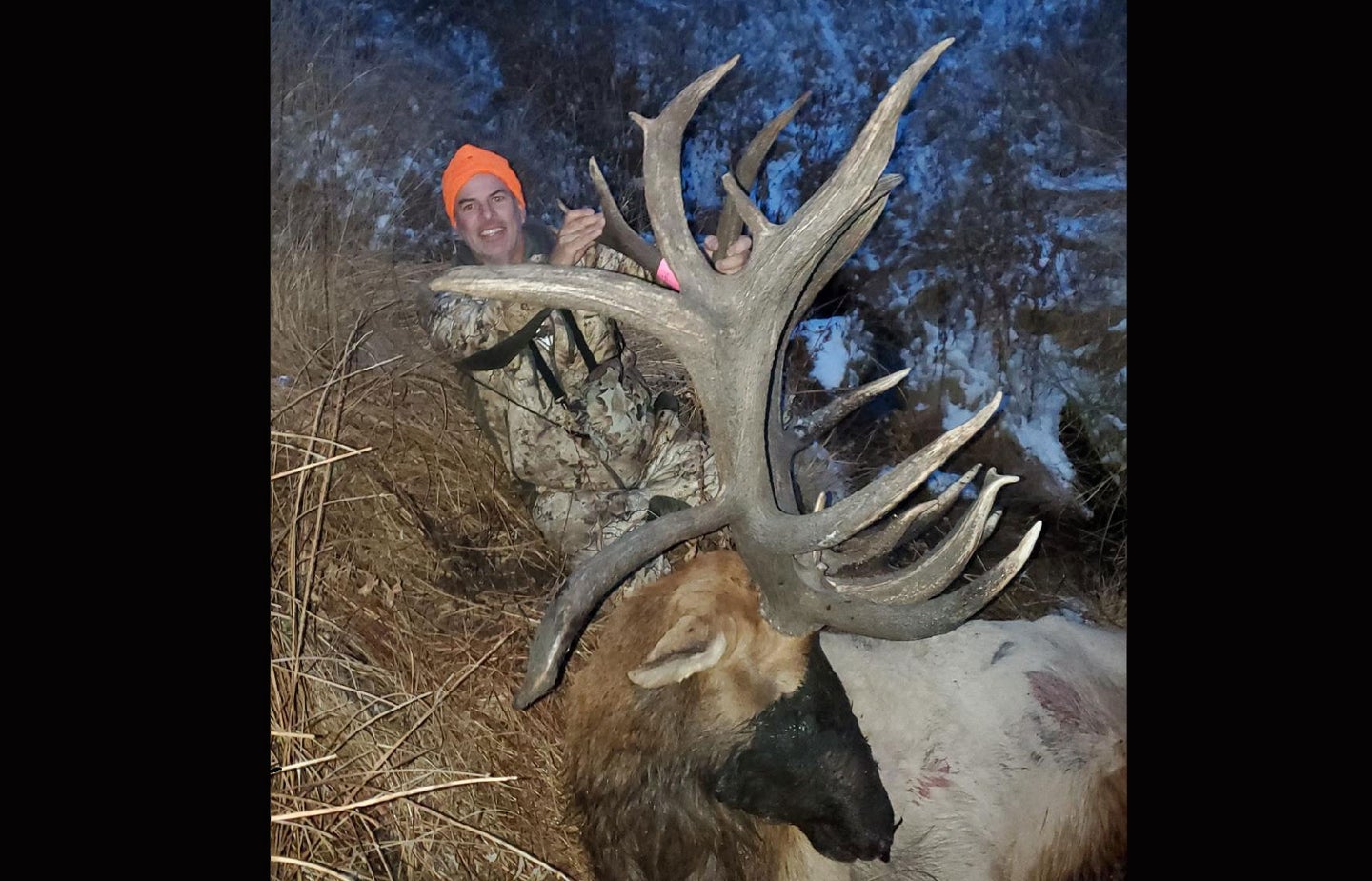 Jason Burtness, 51,  knew how lucky he was in the spring of 2020 when he drew a non-resident non-member elk tag to hunt North Dakota’s Standing Rock Reservation, which straddles the North and South Dakota state line. The Bismarck, N.D. hunter had been trying for years to score an elk tag, and he was excited about the opportunity to chase one of the giant bulls known to roam the well-managed reservation.

Burtness is a native of North Dakota and lifelong hunter, who owns the Rocky Mountain Antler Company with wife, Jorja. He lives two hours from the reservation, so he could dedicate the long hours of scouting and hunting needed to take a bull from the small elk population on the sprawling and rugged Standing Rock.

The reservation’s elk herd is small in number (only three Trophy Bull Lottery Tags were made available for the 2021 season), but it has several quality bulls on it, as well as other game, such as deer and antelope, hunters can enter a lottery for.

The reservation is made up of rolling hills and rocky ridges—it’s tough prairie country. From a high spot hunters can glass for miles. Unlike some reservations, Standing Rock has private land interspersed throughout much of it. Lottery hunters must use a mapping application on their phone to confirm animals are located in places they are allowed to hunt. The hunters are also not allowed to hike onto private property.

Burtness spent the summer scouting hard. He also networked with other experienced reservation hunters, ranchers, and landowners. When the reservation archery elk season opened Sept. 1, 2020, he had a good idea of where the bulls where and how to hunt them.

“I bowhunted the reservation four times and located several nice bulls,” he said. “I missed some good elk opportunities with my bow, and saw one huge bull, but just couldn’t get a good shot. I would have been happy with a 350-inch bull with my bow, but it just didn’t happen.”

Elk gun season opened Sept. 26, on Standing Rock. Burtness had been in elk during bow season, so he thought his chances were good to find another shooter bull. His weapon of choice was a 30-year-old .300 Weatherby, necked down to 7mm, shooting 160-grain Spitzer bullets.

But Burtness missed the rifle opener because he was out of town on business. When he returned to hunt the reservation, a few bulls already had been taken by other lottery hunters.

This made Burtness more dedicated to tagging a trophy bull. He started rifle hunting the reservation Sept. 28, and hunted 22 consecutive days before finally pulling the trigger. His daily hunts all started from his home in Bismarck, sometimes leaving his house at 3 a.m., returning about mid-day. Other days he left at noon and hunted until the end of legal shooting light. Most of the time he hunted solo, though occasionally friends tagged along.

The morning of Oct. 19, 2020, was the first heavy snow to blast North Dakota that fall. Burtness met a pair of friends who had reservation deer tags. They started hiking and glassing for game in the cold, windy weather. There were several inches of snow already on the ground and it was beginning to blow.

“We saw no elk, and some nice deer, but about mid-day we decided to hike out, warm up in our vehicles, and watch the weather,” says Burtness. “We decided to drive to town for a bite of lunch in our two vehicles, and on the way I spotted a small elk herd. I stopped and glassed them and decided to hike near where they were and see if there were any good bulls. My two pals Rick Froehlich and Jack Lengyel decided to leave for town, eat lunch, then come back and deer hunt.”

Burtness hiked to a high spot and checked on the herd of about 20 elk that included several bulls, including a sizable herd bull. In time, a second band of elk with another herd bull showed, and the two herd bulls got into the most vicious elk battle Burtness ever witnessed.

“It was wild, especially since it was what traditionally is not the elk rut,” said Burtness. “I figured the snowstorm might have made them frisky, resulting in the fight.”

While Burtness watched the elk battle through a spotting scope his phone rang. It was his deer hunting buddies who had returned from lunch and were watching the same elk fight and wondering what Burtness was going to do.

“About that time the elk broke off their fight, the two small herds separated and started moving slowly away,” says Burtness. “My buddies said they spotted a whitetail buck and were going to make a play for him.”

Burtness met his friends on a ridge top overlooking the area where he could see both small elk herds bedded. He decided to stay on the ridge to monitor elk, while his friends moved off into a draw to stalk a deer.

About 30 minutes passed, then Burtness heard a shot. His pal Rick Froehlich took a nice 140-inch whitetail buck. Jack Lengyel soon showed back at the ridge top, telling Burtness he was headed back to their vehicle to get larger backpacks to get the deer out. Burtness volunteered to help, and told Lengyel he’d wait on the ridge and keep glassing for a good bull, then go into the draw to assist packing out Froehlich’s buck.

“I could see far off where I’d hunted that morning and two bull elk were in another all-out fight several miles away,” says Burtness. “They were acting like it [was] pre-rut, and here it is Oct. 19. I couldn’t tell how big they were, but they looked large, and there was enough light remaining in the day to make a play for them.”

Read Next: The Hunt for the New World-Record Archery Elk

The Bull of 100 Lifetimes

Lengyel soon returned with large backpacks and all three hunters worked to quarter Froehlich’s buck then pack it back to their truck. Burtness and Lengyel decided to make a late afternoon stalk to where the two large elk were seen fighting. Froehlich was whipped from the day’s events and decided to stay at the truck.

Burtness and Lengyel took off toward the bulls, through cold and wind, though it had stopped snowing. An hour later they topped a ridge and could see where the bulls had been fighting and started glassing the timber and draws looking for elk.

“We’re glassing for a couple minutes, and Jack spots a bull down near a creek drain,” says Burtress. “Jack then says, ‘he’s a GIANT bull with a drop tine. That’s not a once-in-a-lifetime bull, it’s a bull in 100 lifetimes’.

“That was the first time I ever saw the bull, and what Jack said to me has stuck with me ever since. It was the bull of 100 lifetimes.”

The wind was blowing perfectly in their faces, so they started a stalk toward the animal. It was about 4 p.m.; a couple of hours of shooting light remained. They reached the place where they’d spotted the bull, but it had moved. They glassed the area and spotted it bedded about 120 yards away, the wind still blowing in their favor.

Only the top half of the bull’s antlers were visible, as it was bedded and its body shielded by brush and trees. Burtness decided to belly crawl to close the distance to the bull and get a shot. Lengyel stayed back while glassing the bull.

Burtness crawled through buckbrush to within 60 yards of the bull, which remained bedded, its body hidden in cover.

“The buckbrush thinned a bit, and when I reached that spot the bull’s sixth sense knew something wasn’t right, and it stood up, looking right at me,” says Burtness. “I quickly got to my knees, put the Leupold scope on his shoulder, and fired.”

Immediately the bull was off at a full run, and Burtness worked another rifle round into the chamber and hit the bull again, then a third time—all three shots hit the bull. Then the bull charged out of sight down into a creek drain. It died at the creek, its nose in mud, which is why the bull’s face looks so dark in the photo.

Lengyel joined Burtness and they walked to the dead bull, tagged it, then tried to move the animal, which was impossible. The hunters collectively have taken numerous elk, and estimated the bull weighed 1,000 pounds. It was later aged at 6.5 years old.

Even after field dressing the bull, it was still immoveable. So they quartered it and packed it out of the draw to the top of a ridge where a couple friends with a pickup truck helped load the bull.

Most recently Burtness’ bull has been officially accepted as a record by the Boone & Crockett Club of North America. It ranks the bull as the 16th largest non-typical elk ever recorded.

“I have so many people who helped me take this remarkable animal,” Burtness says. “North Dakota and the Standing Rock Reservation folks do a tremendous job in managing their game. We have great big game genetics in North Dakota that helps our animals grow so large. Of course a steady diet of soybeans and corn helps, too.”