Getting an itch to extend your season? These three states offer the best over-the-counter tags for whitetails 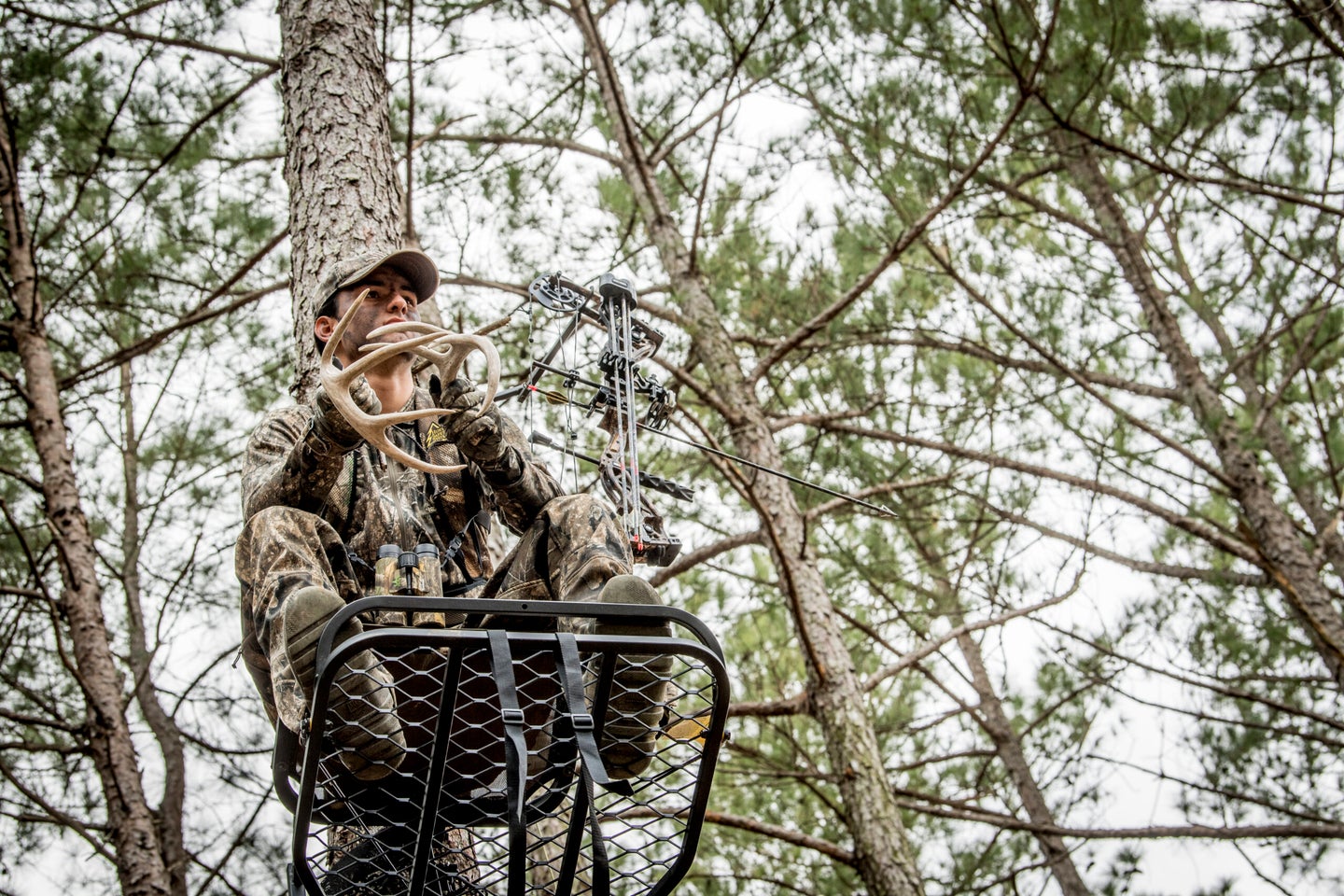 There are plenty of OTC opportunities in these three Midwestern states. Realtree
SHARE

Many whitetail hunters stick close to home each season, and there’s nothing wrong with that. You’ve likely put in time planting food plots, hanging stands, and checking trail cameras—doing all that you can to shoot a good buck. But there are plenty of reasons to travel out of state for a fall deer hunt. Crossing state lines to hunt can be a great option if: you live in an area without much access, you’re looking for a challenge, you want to deer hunt before your state’s opener, or you just want to keep hunting after tagging out.

That can be intimidating for hunters because some states have draw-only systems that require applications from nonresident whitetail hunters months in advance. Other states have relatively little public land, making it difficult to access quality ground. You have to research all that before you go. Or, you could just find a state that has over-the-counter buck tags, a healthy population of deer, and plenty of public land to hunt them on. There are three Midwest whitetail hotbeds that have at least two of those three elements, which make them ideal destinations for traveling hunters. So, if you want to hit the road this fall and try to punch a non-resident deer tag, here are your best options. (Note that all dates below are for the 2021-22 season.)

The state offers over-the-counter tags for deer, including nonresident firearms, archery, and crossbow licenses, which are available for $160 apiece. Hunters can take one buck with a bow or crossbow, and one buck with a modern firearm or muzzleloader. Bonus antlerless permits are available by unit, and varying numbers of free antlerless permits can be had with each license for Farmland Zone units and metro sub-units.

Wisconsin has a liberal 114-day archery and crossbow season, running from Sept. 18 through Jan. 9, 2022. The season extends to Jan. 31 in metro sub-units. The general gun season is brief, lasting only nine days, but Wisconsin also features a 10-day muzzleloader hunt, a four-day December antlerless hunt, and an antlerless-only holiday hunt in select units.

Bucks typically ramp up pre-rutting activity about the third week of October, with peak action usually occurring the first week of November—during the heart of bow season. Good opportunities still exist after the firearms and muzzleloader seasons, but the state’s harsh winters can create difficult conditions for hunters unless you snowmobile.

Wisconsin has almost 5.9 million acres of public land, or about 17 percent of the state’s total land area. That includes state, county, and national forests, plus DNR fish and wildlife properties, and other publicly-accessible areas. The state’s Voluntary Public Access program is also gaining steam, which provides financial incentives to landowners who open their property to public hunting.

Deer numbers are highest in the southern two-thirds of the state, which features more agriculture. Counties near the Mississippi River and in the state’s Driftless Area— Buffalo, Crawford, Trempeleau, and Sauk counties—typically produce the largest bucks. The region doesn’t feature huge chunks of public ground like northern Wisconsin, but it has many smaller properties, and the 45,000-acre-plus Lower Wisconsin Riverway. Hunting pressure is usually higher in the densely-populated southeastern and east-central portions of the state, but hunters can still find public land to roam, including the northern and southern units of the Kettle Moraine State Forest.

“I think people just ignore them,” he says. “Most people are concentrating on a high density of deer or areas where they think they can kill a big buck.”

Jeff Pritzl, deer program specialist for the Wisconsin Department of Natural Resources, is optimistic about the 2021 season. Antlerless harvest quotas were raised in most areas, although the far northeastern forested region continues to have a conservative antlerless harvest strategy to maximize growth potential.

“Last fall’s harvest data suggests a growing herd, and the mild winter of 2020-21 allowed deer to come through with good body weight, which leads to good antler development and fawn production,” he says. “We had very good weather during the fawning season, and vegetation growth to support lactation has been good as well.”

With long seasons, millions of acres of public land, and good deer numbers throughout much of the state, Michigan is an easy choice for non-residents. Hunters there took 420,071 deer in 2020, including 219,262 antlered bucks (Michigan differentiates between antlered and antlerless bucks due to its late antlerless firearm season, which is open when some males have already dropped their antlers).

The state offers over-the-counter deer tags for nonresidents, who must first buy a standard hunting license for $151. A nonresident deer license is $20, and a nonresident deer combo license costs $190. Hunters must decide at the time of purchase if they want to harvest one or two antlered deer (except in Deer Management Unit 117). If you want to harvest one antlered deer, you can purchase a single deer license (one tag). The tag is good on public and private land for an antlered deer, an antlerless deer in the Lower Peninsula, or an antlerless deer during archery season in select Upper Peninsula units. You can also use it for the early and late antlerless firearm seasons.

Michigan has a 77-day archery season, beginning Oct. 1, closing for the 15-day firearms hunt, and then running again Dec. 1 to Jan. 1. There is an extended archery season in the urban deer management zone that includes Macomb, Oakland and Wayne counties through Jan. 31.

Michigan bowhunter and author John Eberhart, who has taken 31 bucks listed in the Commemorative Bucks of Michigan record book, including many from public land, said the pre-rut period—specifically Halloween through the first week of November—is usually the best time to hunt. Post-rut hunting can be difficult because of the length and timing of the state’s gun season, he added.

The state has about 7.7 million acres of public land, in local, county, state, and federal holdings. The Michigan DNR oversees about 4.6 million acres of public land. Much of the public land is in the U.P., where deer densities are far lower than in Lower Michigan. However, hunters can explore the Hiawatha, Huron, Manistee, and Ottawa national forests in the northern reaches of the Lower Peninsula. Ashley Autenrieth, a former state deer program biologist, recommends that hunters check out public spots in the counties of Wexford, Missaukee, Gladwin, and Ogemaw.

You can also use Michigan’s MiHunt map to find land. Historically, the highest concentration of record Michigan deer have come from the southwestern part of the state, but public access there is limited.

“Last year’s harvest was the highest in Michigan over the past decade, and 2021 should see another great year for hunters,” Stewart says. “The historic trend has been increasing populations throughout much of the Lower Peninsula, with variable trends in the Upper Peninsula, depending on where you hunt.”

Eberhart said Michigan deer hunting is more about quantity instead of quality. Hunters will have to go to extremes, be patient, and pass on a lot of deer to find a trophy buck.

“If somebody is looking for a state where they can go kill a deer, as far as deer numbers, we’re definitely right up there at the top of the list,” he says. “But hunting generically won’t work. You have to try to pretend [like you are an old buck, and]. You’ve got to go across a river, lake, or swamp. If everybody was trying to kill you—where would you go during daylight hours?”

Read Next: How to Plan a DIY Deer Hunting Road Trip

With a four-month-long archery season that begins in September, Nebraska has become increasingly popular with hunters seeking an early start and a Western experience without leaving the Midwest. Nebraska hunters killed 50,828 whitetails in 2020, including 29,726 bucks. That pales in comparison to Wisconsin and Michigan, but you’re also not going to face as much pressure from other hunters here as you would in the other two states, either.

OTC nonresident archery tags are $285, nonresident restricted statewide buck-only firearms deer tags cost $698, and nonresident whitetail statewide buck-deer tags are $707. You can also purchase limited antlerless tags for specific management units. Hunters are allowed up to two buck permits. It’s a pricey endeavor, but your competition will be minimal and the reward often worth it. The general gun season runs Nov. 13 through 21, followed by a month-long muzzleloader season in December. Special antlerless seasons stretch into January.

Whitetails are most common in the eastern half of Nebraska, generally in areas with abundant timber. However, they’re just as or even more abundant than mule deer in some western stream corridors. Generally, nonresident hunters like Nebraska’s early bow season, as it provides opportunity to hunt velvet bucks and allows archers to get a jump on the season. The pre-rut (late October into November) also features good whitetail hunting.

If Nebraska has a downfall for traveling whitetail hunters, it’s that 97 percent of the state’s land is privately owned. Still, it has about 1.2 million acres of publicly accessible property. The Open Fields and Waters initiative, a voluntary program that offers financial incentives to landowners to allow public walk-in access for hunting, trapping and fishing, provided access on more than 372,000 acres in 2020-21. The Oglala National Grassland, Bessey Ranger District of the Nebraska National Forest ,and the Nebraska National Forest at Halsey also remain attractive options for hunters.

“I’m targeting whitetails, and [western] Nebraska has notoriously open terrain, so I’m looking for those low areas that have water, trees, and cattails [that provide bedding cover],” he says. “Look for spots that are isolated, because there’s lots of open terrain, which makes it hard to get close to deer.”