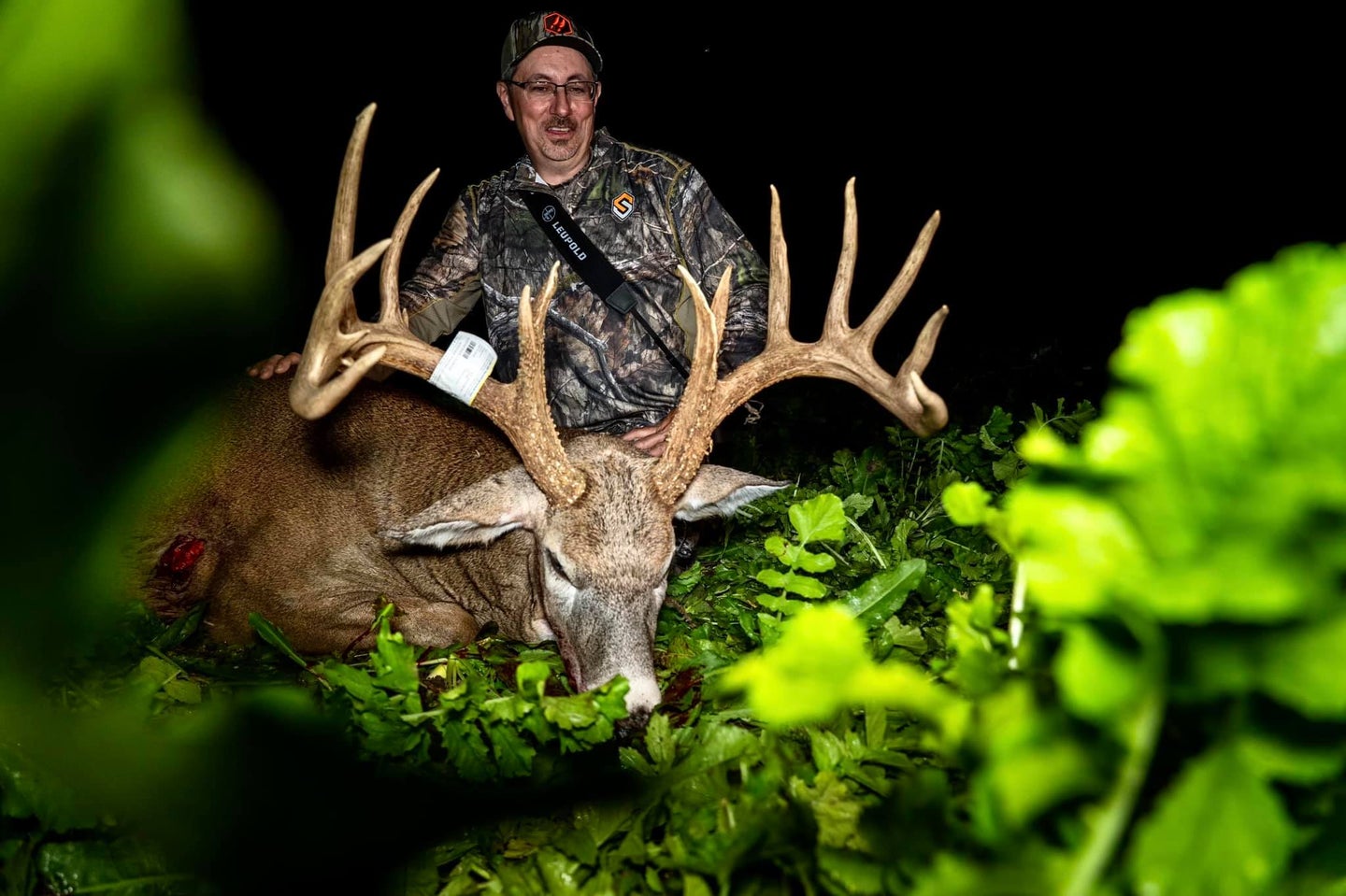 Mark Drury's biggest buck ever was green-scored at 216 inches.
SHARE

Mark Drury has seen and tagged more than his share of heavy-beamed whitetail bucks. So he knew the deer he first got photos of a few years ago was a special animal.

“The first pictures [from a remote camera] I got of him was on our southern Iowa property in the summer of 2018,” says Mark, of Drury Outdoors fame. “He was 3.5-years old, and had it all —wide [rack], mass, the potential to be a really great buck. I thought this buck was going to be a giant.”

Drury got a few more photos of the buck that summer, and then it suddenly vanished, never seen on camera again through the warm months, hunting season, all the way through winter.

“I thought he may have got killed, shot, died from EHD, we never even found his sheds,” Drury says.

The deer never showed all through 2019. However, during the summer of 2020 Drury was putting out supplemental feed on his property, and the buck suddenly showed on a remote camera again, but just one photo.

“That’s when I named the buck ‘Disappearing Act,’ and he had grown into a monstrous whitetail,” Drury says. “I only got one photo of him in 2020 and his velvet was starting to come off. Then that was it. No more photos through the winter even with supplemental feeding we were doing, no sheds from him, nothing.

“I was then convinced he had a fall range, a rut range, and maybe a winter range, too—somewhere. A lot of summer bucks disappear in fall but show again in winter. But he never came back to our farm that year and I have no idea where he disappeared to.”

By the summer of 2021 Drury was back at putting supplemental food out for his land’s game, and he didn’t have much hope for seeing the giant buck again, which he figured would be in his prime at 6.5 years old.

“I wasn’t even focused on him, but much to my surprise and delight I got some post-velvet photos of him in September 2021, then even a daytime photo on a food plot where I’d taken another great buck,” says Drury. “On Sept. 30 he just disappeared again. I was convinced he left our farm again to go off for the rut or his autumn range.”

But on the night of Oct. 6, 2021 Mark got photos again of the deer, and conditions were perfect the following day to hunt the spot the buck had been photographed remotely.

“We decided to try hunting for him on Oct. 7, because a weather front came through that night, cleared off and a nice south wind made the spot ideal,” says Drury. “And we knew he was still around, he’d not yet left the property.”

That afternoon Drury and a cameraman went to the spot he calls his “buck hotel,” which is a lowland area that floods some years, but in dry conditions it’s a choice radish food plot with a huge adjacent stand of thick tall grass and small trees – ideal buck cover and habitat. They climbed into an elevated shooting house and waited, watching for “Disappearing Act” to make his entrance.

At dusk the cameraman saw the buck first, and when Mark focused his binoculars on the buck he knew it was him.

“He was coming straight to us through the thick grass, looking like Moses parting the Red Sea ahead of him,” states Drury.

The deer stepped out of the grassy cover into the open radish field and began eating, slowly closing the distance to the shooting house. Drury ranged the buck at 43 yards, the same distance he’d missed a giant buck the previous year. All summer he practiced that distance (which is about the edge of whitetail-shooting range). So he was confident when he raised his Matthews bow, pressed the release, and the arrow flashed away as the deer stood broadside.

The shot was perfect, the lighted nock on the arrow showing it took the buck tight behind the shoulder, completely passing through the deer, the Rage broadhead quickly doing its work.

The buck ran only 40 yards before falling, while still in the radish field.

The entire hunt was filmed and a short version of the forthcoming television show is now available on YouTube.

The buck is truly a magnum Iowa whitetail, weighing well over 200 pounds with 17 scorable points, and a green gross rack score of 216 5/8 inches. It’s the second largest buck Drury has ever taken, only surpassed by a 217-incher.

Why the buck stayed later into the hunting season on Drury’s Iowa farm is unknown.

“Maybe in other years a bigger buck ran ‘Disappearing Act’ off the property, but at 6.5 years of age he may have been at the top of the deer hierarchy,” Drury wonders. “Maybe the radish food plot was important to him. I just don’t know.

“I do know that whitetails are the ultimate game animal, and they teach us something every time we go afield with them. Hunting them is like an ultimate outdoor chess match, where we try to stay one step ahead of deer all the time.

“I’m so blessed to hunt deer, and I’m honored and humbled to have had the opportunity to take such a buck and to enjoy the entire experience.”