Here's the story behind this incredible, 200-inch Kansas buck 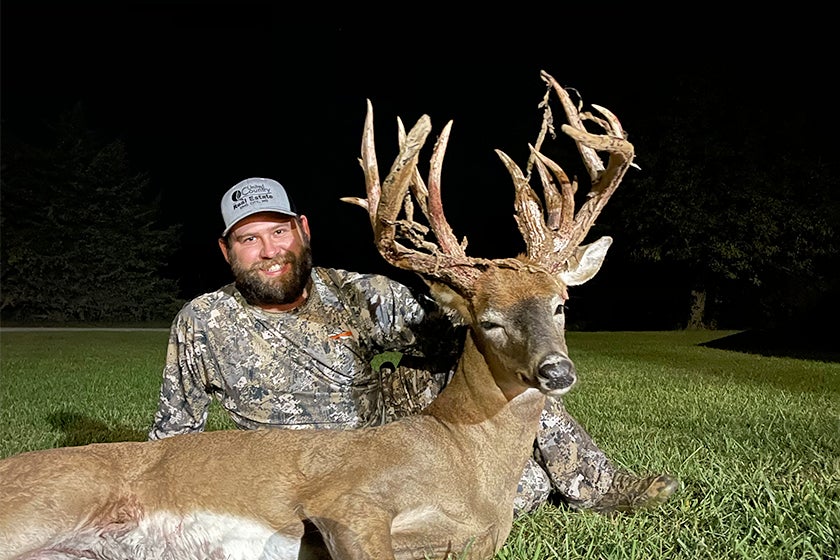 Kansas is well known as a top state for hunting giant whitetail deer. Hunter Burkhardt, 27, is a native of the Jayhawk State and has taken plenty of deer with his bow, including three massive Boone & Crockett-class bucks. His latest buck is certainly going to help build Kansas’ reputation as a big buck state.

It seemed fitting for Burkhardt to start guiding and outfitting hunters on his home turf, so he started Coal Creek Outfitters out of Baldwin City in northeast Kansas. He and family members guide deer and turkey hunters, and he has about 9,000-acres leased to hunt. He’d just acquired a new lease and was scouting it and placing remote cameras around the property to learn about its deer when he started getting pictures of a massive buck.

“I started getting photos of a massive buck at night, and I began to pattern his movements,” says Burkhardt. “The buck was coming from the west, and I kept moving cameras that way so I could learn where he lived and hopefully find a spot I could ambush him in the day.”

Burkhardt was learning more and more about the huge non-typical buck, but then the deer suddenly disappeared. Burkhardt figured the still-in-velvet buck had moved on, so he turned his attention to other big deer on his hunting leases.

About a month later the buck – still shedding some of its velvet – suddenly showed on Burkhardt’s cameras again. Although the weather was hot, Burkhardt knew enough about the buck to place a stand and start hunting the buck near a brushy CRP field. He hunted the stand twice without success, but Burkhardt stayed the course.

“I just needed him to mess up one time, and he did,” he says.

It was 93 degrees the afternoon of Sept. 27, 2021 when Burkhardt hunted his stand for the third time. Not much was moving during that hot evening, but finally a few does showed feeding in a CRP field where the buck had been spotted on camera. Suddenly the does got jittery and moved off, and Burkhardt figured something was up.

Sure enough the non-typical buck he wanted moved out of the CPR, but was facing Burkhardt and not offering a perfect shot. A few minutes passed, and Burkhardt drew his bow.

“He was only 20 yards, and I was going to take him facing me, aiming for the soft throat area and sending the broadhead deep into his chest,” said Burkhardt. “But then he turned a bit, giving me a quartering-toward-me shot.”

Burkhardt  was confident he could take the deer, so he released his arrow and saw it hit the buck tight behind the shoulder and penetrate to the fletchings. The buck spun and raced directly back into the jungle of CRP cover.

Knowing that trailing the deer in the tangle of CRP would be tough, and the shot angle to the buck was a bit marginal, Burkhardt decided to leave the area and get help tracking the deer.

He returned with his father Bob and brother-in-law Kyle Smith, but they found no blood, and the trailing job into the CRP was tough. It was full dark, and Burkhardt noticed a faint glow in the cover. He moved closer and saw it was his lighted arrow nock, still attacked to his arrow that was buried in the buck that lay dead in the tangled CRP. Another inch deeper and the lighted nock would have been hidden inside the deer.

“I was using an ‘Ozcut’ fixed-blade, 100-grain broadhead and that thing did some damage,” said Burkhardt. “It took out one lung, severed a rib, drove deep through the deer and broke the opposite-side hip. The buck didn’t travel far before falling.”

The non-typical buck has points and stickers going everywhere, with the rack still shaggy from some hanging velvet. The deer has been green-scored at 202 2/8-inches, making it the biggest of Burkhardt’s 10 bucks by bow he’s taken in his life. Among that trophy tally, are Kansas bucks measuring 171-inches, 172-inches, and 183-inches, the first one downed when he was just 14 years old.

The buck’s estimated weight was 225-pounds, aged at 5.5 years, and there’s more like him still roaming the area, Burkhardt says.

“There are three or four other bucks I know about in the area that are each over 200-inches,” he says.