Duck hunting takes off in the Everglades 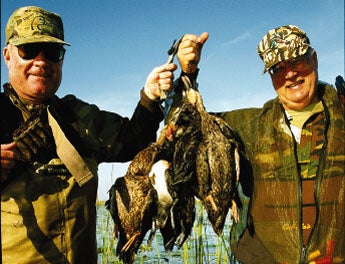 It took hunting buddy Jeff Weakley and me most of the season to score a reservation for one of the “experimental hunts” now permitted by the South Florida Water Management District on Stormwater Treatment Area (STA) 5.

Finally, however, on a blustery January morning, we paddled across the first of six filtration-marsh projects that waterfowlers hope will relieve the crowding and intense pressure typical of most public duck-hunting opportunities in southern Florida. We spread two dozen decoys across a wind-sheltered hydrilla patch and then concealed ourselves in the fringing cattails. Come sunrise, the ducks must have been cold and hungry. Late-season ducks this far south along the eastern flyway typically cast at least one wary eye over decoys first, but these birds poured into the food-rich lee. Within an hour, 11 species lay in the canoe, including a blue-winged teal, a green-winged teal, a pair of Florida mottled ducks, a drake wigeon, a gadwall hen, a shoveler, a Fulvous whistling duck, a drake redhead, a ringbill (ringneck) and a bluebill (scaup).

The safe enjoyment of such experimental hunts has led to a district policy that may ensure hunter access to the five other STAs, which total 144,000 acres, and throughout government-owned lands related to or part of the Comprehensive Everglades Restoration Plan (CERP), which covers 18,000 square miles and constitutes the largest wetland restoration project ever attempted.

Since early 2002, when the Florida Fish and Wildlife Conservation Commission (FWC) convinced the South Florida Water Management District to open STA 5 to 50 hunters one day a week on an experimental basis, a dedicated group of sportsmen, including vigilant members of Delta Waterfowl’s South Florida Chapter, have tried to convince the district that the development of sporting opportunities on Everglades Restoration lands should be thought of as an intrinsic part of the overall Everglades-restoration goal. The district’s new policy, adopted in March 2004, contains that philosophy. It reads, “Public recreational access and use shall be provided for and encouraged to ensure the public’s opportunity for enjoyment and appreciation of the natural resources of south Florida.”

Jeff Allen, chair of the Everglades Delta Waterfowl chapter, calls the statement “a huge victory” because it requires planners to anticipate the needs of recreational users in the design phase and to complete recreational planning for existing areas.

“The policy’s best component,” says Allen, “is the stipulation that the district must select a recreational advisory council. That will let us take our concerns directly to the governing board.”

So far, STA 5 remains the only filtration marsh open to hunters.

“We have it on record that the STA 5 hunts ran smoothly and in no way interfered with water filtration. So I’ve asked for a report on the status of each STA. They do take five years to mature in their primary function, but several of them are about to turn five,” says Everglades Water Resources Advisory Council member Rob Barton.

“We hope we can open parts of STA 3 and 4 this season,” says district chief administrator Henry Dean, “but I want to assure everyone that opening the STAs to hunters is only the beginning. We want to include every form of recreation that’s compatible with the restoration goals.”