Biologists Can Track Waterfowl Better Than Ever, Thanks to This New GPS Transmitter

The days of driving vehicles and flying in airplanes may be over for biologists, thanks to innovative, lightweight and efficient GPS technology 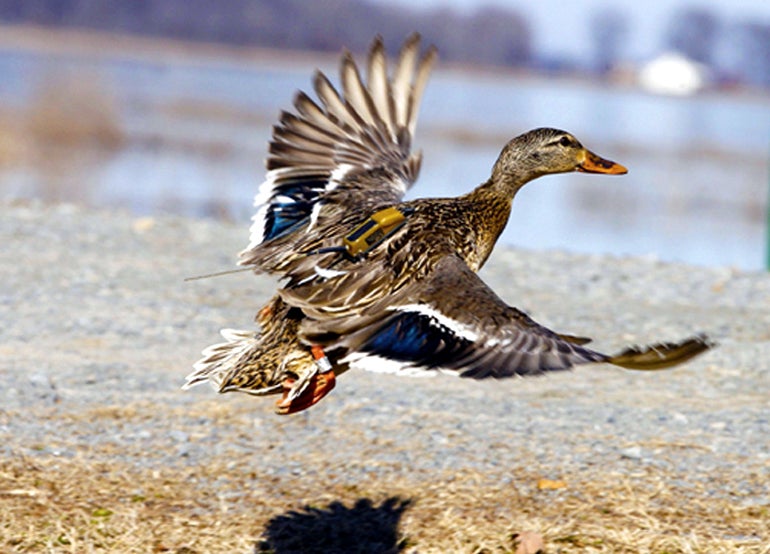 Keeping track of fast-flying and far-flung ducks and geese always has been a tough job for dedicated waterfowl biologists who study bird migrations. But with new GPS transmitters that are smaller and lighter, biologists can keep tabs on GPS-fitted birds closer to real time and more accurately than old techniques allowed, according to the North Dakota Game and Fish Department.

Mike Szymanski, North Dakota’s migratory game bird management supervisor, says improved GPS transmitter batteries have allowed biologists to study post-breeding mallards after they start flying in late summer. With that data, biologists are able to learn much more about mallard migration and movement patterns during that time of year, as well as into the autumn months.

Graduate student Cynthia Anchor is currently working in the field, capturing ducks and managing GPS data. But she’s already learned much about mallard movements thanks to the new GPS transmitter technology, and has been surprised by some preliminary findings.

“We had one bird marked south of Bismarck that moved up to Canada and spent most of the pre-migration period there,” she said. “We had another bird that left North Dakota, went to Arkansas and then moved to eastern Ohio. So, we’re seeing some waterfowl movements that are going to be really tricky to explain.”

Such seemingly random waterfowl travels in varied directions go against the average person’s understanding of seasonal migrations: birds migrate south in winter, and back north in warmer weather to breed and raise their young.

“Having the ability to collect [such] data is very beneficial to painting the picture of [duck and geese] movements,” Szymanski said. “We’re still looking at the movements, trying to figure out if there is a connection to the directions they go, the distances they go, and how it possibly relates to habitat, weather and other factors.”