A Trick for Saving Extra Meat from Fish Fillets, Plus a Recipe for Linguini with Salmon Cream Sauce

Last weekend I was lucky enough to be invited along on a salmon fishing trip over in Sheboygan, Wisconsin. My... 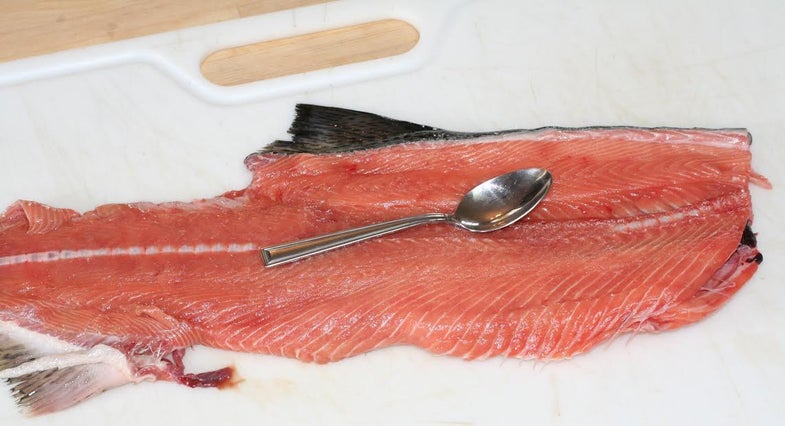 There is plenty more meat to be taken from this salmon. Jamie Carlson
SHARE

Last weekend I was lucky enough to be invited along on a salmon fishing trip over in Sheboygan, Wisconsin. My father-in-law has been going over to Lake Michigan on and off for nearly 30 years. He has told me the story of his trophy rainbow that he caught over there at least a dozen times. It’s a monster 15-pound fish that he had mounted and then hung up in his coat closet. Seems like a strange place to hang a trophy, but according to Ted, he gets to see it every morning when he puts his coat on and every evening when he takes it off.

This year we were hoping to do better than our last trip over, and our first morning out seemed to get off on the right foot. Our charter had barely set out all the lines when we had our first fish. Ted was first up and he brought in a beauty of a king salmon. The action slowed way down after that and the rest of the morning was spent battling the waves, not monster fish. We ended the day with three fish and a touch of seasickness.

The next morning we headed out on a much calmer lake, and it didn’t take much time for the fish to start biting. My brother-in-law Zac brought in a nice Coho salmon, and about every 20 minutes or so we got another. King salmon, Cohos and rainbow trout were all doing their part to make our second day a very eventful one. By the end of the second morning we had 11 fish; add that to the three from the day before and we were going home with around 46 pounds of fillets.

Back at the dock they took our fish into the cleaning station where a very experienced fish cleaner was whipping through all the fish that had been brought in that day. When he got to our fish I asked him if I could keep all of the spine section from the salmon. He looked at me like I was out of my mind and then said, “You can keep whatever you want.” As he was going through our fish, I was bagging up the spine sections and he stopped and looked at me, paused for a moment, and then asked, “What are you going to do with those?” I told him that, on those bigger salmon, there is still a lot of meat on the bones, and it can easily be removed with a spoon. He shook his head and laughed like I was kidding.

I wasn’t kidding. There is seriously a lot of meat left on a fish spine, and you can scrape it off with a spoon in no time at all. With Ted’s big king salmon that he caught on this trip, I took a spoon and scraped off almost a pound of meat. The meat isn’t in big pieces and it looks like ground salmon. I use it to make salmon burgers or teriyaki salmon balls, and this year I made a wonderful linguini with salmon cream sauce that was out-of-this-world delicious.

Thanks, Ted, for inviting me along, and thanks to Seadogs Sportfishing Charters for the great time.

Bring a large stock pot with salted water to a boil over high heat and cook your pasta according to the directions on the package. Reserve one cup of the pasta water before draining. Drain the noodles and set aside in a colander until ready to use.

In a large pan, melt the butter over medium heat, add the shallots and garlic, and cook until soft (about 2 minutes). Season with a pinch of salt, and black pepper to taste. Add the wine and cook until almost all the wine is evaporated. Add the heavy cream and the parmesan and stir together, cooking until the cream thickens up a bit (1-2 minutes). Add the pasta and toss with the cream sauce. If the sauce is too thick, add some of the pasta water until you get a creamy sauce. Toss in the parsley, and serve topped with grated parmesan. This will make 6 healthy servings.