Whether you shoot a compound or traditional bow, probably the most under rated practice methods is the blank or “blind... 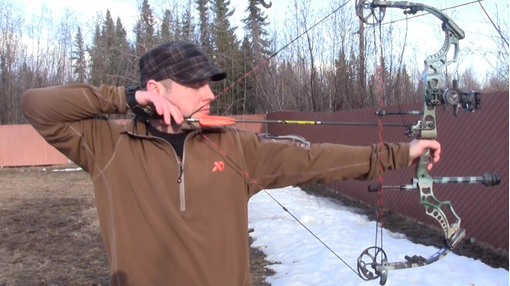 Whether you shoot a compound or traditional bow, probably the most under rated practice methods is the blank or “blind bale.” There is a plethora of issues that an archer must overcome to stay at the top of his or her game, and with tuned equipment, the biggest issue that leads to inaccuracy is human error during the shot sequence.

Many of us suffer, in one form or another, from target panic. It’s different for everybody, and can vary from subtle to extreme. I used to have it so bad that I couldn’t even reach full draw before I would “automatically” let the arrow go. Even many compound shooters who use sights and releases—which theoretically reinforce proper aiming and consistent release—find their form and focus deteriorates while shooting. For traditional shooters, this deterioration is even more magnified without let-off or release aids.

The single best practice method for keeping my form and shot sequence consistently in check is to shoot the blank bale. And by that I mean any large bale or blank target face without any type of bullseye. I usually shoot from a distance of less than 10 feet, often with my eyes closed.

The whole point of this exercise is to build muscle memory. With eyes closed or no aiming point to draw your attention, you’re able to completely focus on the shot sequence. My shot process flows this in my mind: draw, anchor, back tension, hold, hold, hold, release, follow through. I repeat it over and over and over. Every shooter has a slightly different style, but doing this repeatedly will allow you to isolate and work on certain parts of your shot sequence with which you are struggling.

My biggest (and continuing) struggle is trying not to shoot too fast. Some archers shoot very fast, and very well, but not me. For some reason, once the visual stimulation of a target is introduced, I gradually begin shooting faster with sloppier form. For that reason, I try to shoot at the blank bale as much as I can. I’ll start a practice session on the blank bale, then shoot at various ranges. When I feel myself becoming sloppy, I return right back to the blank bale to correct those issues.

Although blank bale shooting can help fix many shooting errors for both compound and traditional shooters, it is more of a long-term treatment than a quick fix, and should always be an integral part of your practice routine.