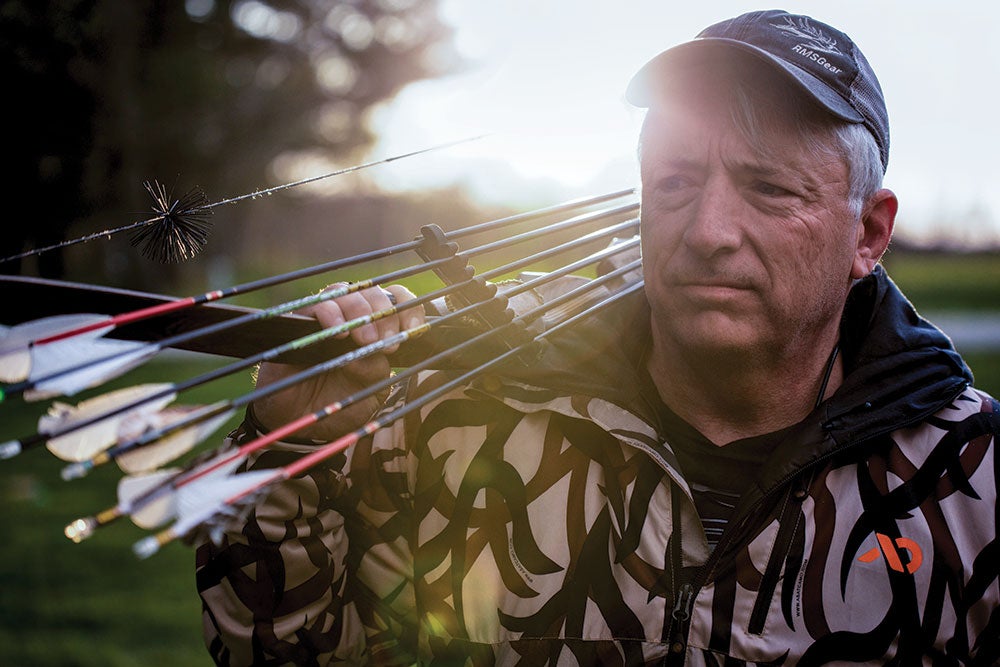 Tom Clum Sr. is considered to be the best archery coach in the country for traditional bowhunters. Timothy D. Nebel
SHARE

Loosing the perfect arrow from a traditional bow creates an intangible feeling of satisfaction and deep connection to a foregone era of bowhunting. And as modern archery continues to incorporate more technology—­faster bows, even faster crossbows, range-finding sights—traditional archery has a stronger appeal for those of us looking for a purer bowhunting experience.

I can remember the exact moment it all snapped into focus for me. A massive black bear boar walked under my treestand. He stopped right below my feet. As he moved forward, he swaggered with dominance, but he also had that spookiness that mature animals need to survive season after season. I drew my recurve bow, released, and watched the arrow bury into the jet-black fur behind the boar’s shoulder. He crashed 60 yards into the timber and died. My path was set.

But the traditional archery road can be a rocky one. There’s nothing easy about hunting with a longbow or recurve. It took me about a year to become a reasonably proficient shooter, and another two years to become very proficient (or at least I thought I was at the time). Traditional archery is a perishable skill, and my accuracy and consistency have always fluctuated based on how much I shoot. Like most trad shooters, I had no formal instruction or coaching aside from working on my shot with my dad, who is another self-taught archer. By flinging countless arrows, I became a good shooter and bowhunter.

I have hunted and killed deer, black bears, moose, and grizzlies with my trad bow. But I always felt like I wasn’t reaching my full potential as an archery hunter. And I’ve never had the guts to pack my bow on a Dall sheep hunt.

As an Alaska resident, I’ve chased sheep nearly every year of my adult life, and I have a clear understanding of how brutally demanding the hunt can be, even with a rifle. With a traditional bow, the challenge borders on foolishness. There’s a slim margin for success. But those long odds are exactly what makes it so irresistible. To give myself the best chance of killing a ram with my bow, I’d need to take my shooting to the next level. I’d need to be prepared, both mentally and physically, to shoot with control and confidence when it counts, because shot opportunities on a sheep hunt are fleeting, if they come at all. I knew I’d need a shooting coach.

I first heard about Tom Clum Sr.— whose family owns Rocky Mountain Specialty Gear, a prominent archery shop and range in Wheat Ridge, Colorado, that focuses on traditional archery gear and coaching—from a buddy and Clum protégé, Aron Snyder. Tom coached Snyder, who, in just a few years, became one of the best hunting recurve shooters in the country. If he could help Snyder, I figured, he could help me too.

So, I decided to give Tom a call. After a long talk over the phone, I sent him some videos of my shot.

I didn’t expect to get much more than a few pointers that would help perfect my technique, plus some compliments that would inflate my ego. I was wrong. Tom told me, “I can tell you have developed an accurate way to shoot a bow, but to get better, you have to be willing to get worse for a short time.”

In other words, I would have to start from scratch, Tom’s way. A few days later, I booked a flight to Denver to relearn how to shoot a bow.

Tom, or “Senior,” as he is affectionately called around the shop, comes from a family of wrestlers and wrestling coaches, and his build and demeanor are true to his lineage. Short, stocky, and serious, it would be easy to imagine him at the edge of the mat, commanding his wrestlers or staring down a referee over his front-snap magnetic glasses. But even more than a coach, Tom is a teacher. He’s got a passion for archery that’s infectious. Like a man who’s found religion, Tom is consumed by a fervor to share what he’s learned with anyone who will listen.

Until now, traditional bowhunters have had minimal science-based guidance. Each boom in trad archery has been followed by a swell in used bows being offered for sale, once purchased by enthusiastic shooters only to be given up for the next hobby. Trad archery is hard, and it’s even harder when there aren’t reliable resources for improving. Inevitably, archers drop out. This is where Tom comes in. For him, any accurate, repeatable shooting is good shooting. But he makes a strong case that many of today’s popular techniques leave much to be desired.

“Traditional bowhunters used to be informed by target archery, and there were a lot of really good shooters,” he explains as we drive to the shop. He says that back in the day, field archery shooters regularly shot recurves and longbows at ranges that would challenge many compound shooters today. But that changed as instinctive shooting became the dominant method.

“We were all terrible shots [during the instinctive-shooting days],” Tom says. “But we became sneakier and got closer.”

Instinctive shooting is a vague term that should not be confused with instinctive aiming. As commonly understood, it’s the method of shooting a bow by feel. The general idea is that, through repetition, you will be able to go on autopilot during the shot—simply focus on a spot, draw your bow, and hit it. It sounds wonderful, magical even. And when it works, it works beautifully. Many critters have been killed by this method.

But instinctive shooting is not a formula for consistent accuracy. For many trad bow shooters, myself included, it led to frustration, unpredictable snap-shooting, and target panic. At my worst, I was unable to even reach my anchor point without letting go of the arrow.

“When you are giving your shot over to the subconscious, you are literally hoping it will work and be the same every time,” Tom says. After decades of doing things “the wrong way,” Tom found the NTS method of shooting a bow.

NTS stands for National Training System. Developed by U.S. Olympic coach Kisik Lee, it’s the standardized method for shooting a bow. It’s a back-tension shot, based heavily on biomechanics, with the goal of producing a repeatable shot while preventing the all-too-common shoulder injuries that plague archers. There’s also an important mental component—you walk through each step of the shot process cognitively as you are shooting.

It’s been the standard in USA Archery since 2006. But Tom saw that, with some slight alterations, this method could also be very effective for bowhunters. Along the way, he earned a Level 4 coaching certification—the second highest in USA Archery.

At his shop’s shooting range, Tom tells me: “Everything is based around building a solid holding position. That’s where we want to end up, so I want you to know what it feels like.”

He pushes my bow arm and shoulders into alignment, and when his molding is complete, I’m in a full-draw position that’s stable. Next, we spend hours working with just a stretch band on all the nuanced steps it takes to build that holding position.

When it’s finally time to shoot, Tom gives me feedback after every arrow, and I improve even faster. By the end of the second day, I’m stacking arrows in the 10 ring of a 3D deer at 57 yards.

I’ve got a rigid checklist burned into my memory that I run through on every shot: Feel the correct muscles engage. Bring the bow to full draw. To anchor. Then transfer to hold. Settle into a true holding position, and let that calm sense of control set in. Confirm focus on the target. Think only about finishing the shot. And watch as the arrow thuds into the center of the target.

By the end of the third day, I’m not just one of Tom’s students, I’m a full-on disciple. Tom wants every bowhunter to experience the feeling of rock-solid confidence—not just hoping the arrow will find its target, but knowing you are sending it there. Now that I have experienced it, I want the same thing. It’s too good not to share.

Read Next: How to Shoot a Traditional Bow