Waterfowl Offseason: How to Touch Up the Paint on Your Duck Decoys

Considering how much enjoyment they provide, waterfowl decoys don’t get much respect. During hunting season they’re stomped on, shot and... 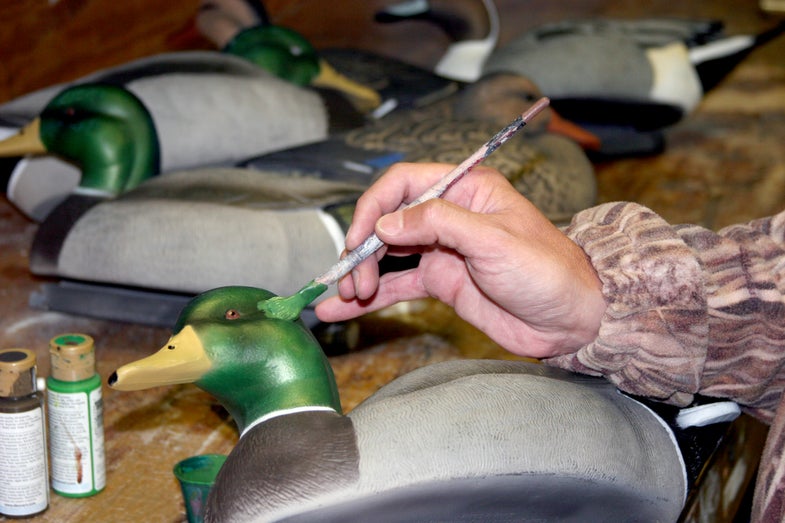 Considering how much enjoyment they provide, waterfowl decoys don’t get much respect. During hunting season they’re stomped on, shot and generally mistreated by man and dog alike. Come season’s end, they’re tossed into a corner of the garage and left alone until the onset of cold weather tells us it’s time to dig them out again.

That’s usually when we notice the dekes aren’t in very good shape. In fact, they don’t look anything like they did when we bought them, and lack the pizzazz that usually makes ducks ignore the sour notes we hit on our calls and drop in for a visit.

Hunting season is still a long way off, but there’s no better time than now to get your decoys looking like new again. Depending on how many you own, this job might take a while. Here’s how to go about it.

1. Clean Up
Use a clean shop sock to apply petroleum jelly on all exposed surfaces of a decoy. Rub it around as if you were applying it to a shoe and then wipe it off. Once you’ve taken the grime of a few hard hunts off the decoy, you might discover that a touchup paint job can wait another season. Otherwise, prepare to paint. The best place to do that is in a well-ventilated area where you’ve got plenty of space in which to work and you’re comfortable. 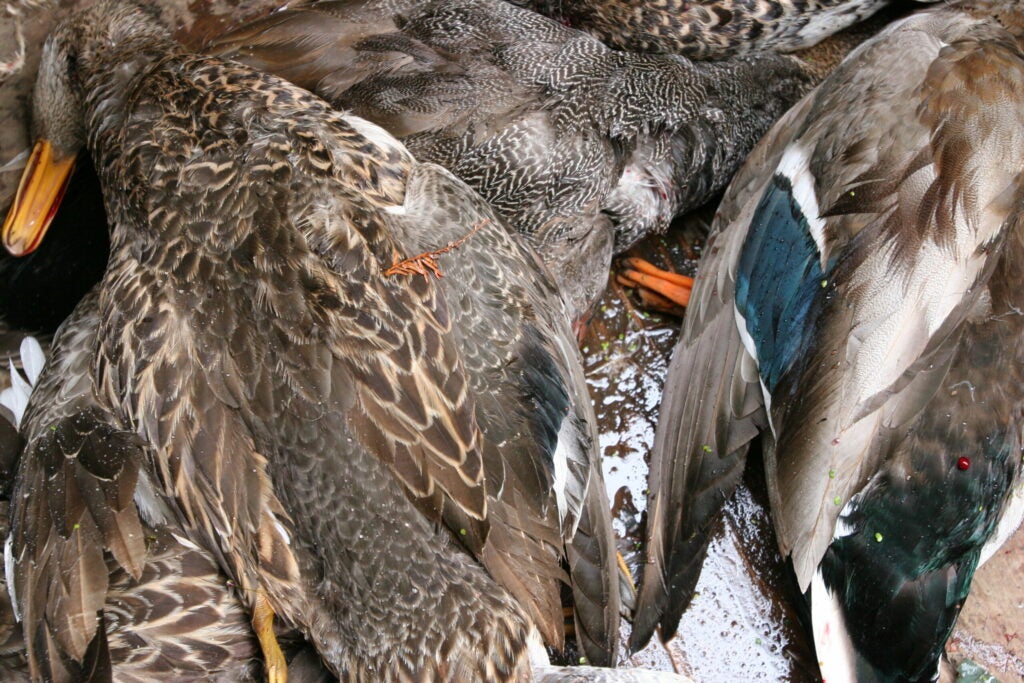 Mixed Bag: The color patterns that grace the plumage of real ducks make the best guide when you’re touching up decoys that have lost their pizzazz.

2. Refresh Your Memory
The best way to match colors is to study the photos of ducks and geese found in waterfowling magazines or on web sites. There are distinctive color markings and patterns that identify them to other waterfowl as belonging to a particular species, even at a distance.

3. Use The Proper Paints
Some plumage, such as a greenhead’s neck feathers, has an iridescent quality. Hobby shops or the hobby departments in many stores sell paint that comes close to matching nature’s palette. Otherwise, flat or satin-finish paints work. Mail-order outlets market decoy paint kits for about $60 that will cover at least a couple of dozen decoys, depending on species and how banged up they are. Also, be sure to check out the line of ultraviolet-reflective decoy paints Parker Paints markets. Parker sells kits that match the most popular puddle ducks and divers, as well as Canada geese, in its UVision line.

Flambeau also markets decoy paint. It’s available in stores such as Mack’s Prairie Wings in Stuttgart, Ark., or Dick’s Sporting Goods. The ingredients of such paints aren’t harmful to most decoy material, including paper mache. However, it’s not a good idea to use spray paint or oil-based paint on compressed-foam decoys; it will eat holes in your dekes.

4. Brush It On
Unless you’re an expert with a spray painter such as artists use, refresh the paint jobs on decoys with a flat brush. In most instances, ¼, ½- and 1-inch brushes will do. The smaller brushes will work for the eyes and bills, rings, wing patterns, blotches, and that sort of thing. If spray paint is used in some instances because the area to cover is so large, make sure it has a fan-shaped applicator.

5. Paint for Effect
Don’t worry about the small stuff such as feathers–you’re trying to fool ducks at a distance, not win an art contest. If a duck is close enough to see that there aren’t any nostrils in the bills of those mallards down there, it’s close enough to shoot.

6. Moving Parts
The outside surfaces of mechanical decoys, such as those developed by Mojo, can be refreshed just like your plain old floaters. The insides require a bit more care, however. Put a couple of drops of machine oil on the wing shafts and give them a few spins to cover all surfaces. Also, recharge the batteries at least once between now and opening day—don’t let them drain completely over time.

If you have a remote that matches your mechanical decoy, make sure it works and check all set screws for tightness. If something isn’t working right, you have a couple of options. Either order the part that needs replacement and replace it yourself, or send the decoy back to the manufacturer for repairs. Mojo will make sure everything is in tiptop working order for $30. If a new remote is required, the cost is $50.

And finally: leave Grandpa’s dekes alone. Don’t ever paint or attempt to clean an old wooden or cork decoy that has passed into the realm of collectible status. In fact, don’t even take them out of your man cave–they’re too valuable to ruin now.

Only mad dogs, Englishmen, and bass fishermen go out in the noonday sun this time of year. So if you’re none of those, and need a useful inside chore to occupy your time, dig out your decoys and give them a good going-over now. Come waterfowl season, at least you won’t have to worry about that aspect of your hunting game, and can spend more time on all the other things that you put off until the last minute.