Photo by: Fred Greenslade Gadwalls don’t get much respect. When plumage was being handed out, the gadwall must have paddled... 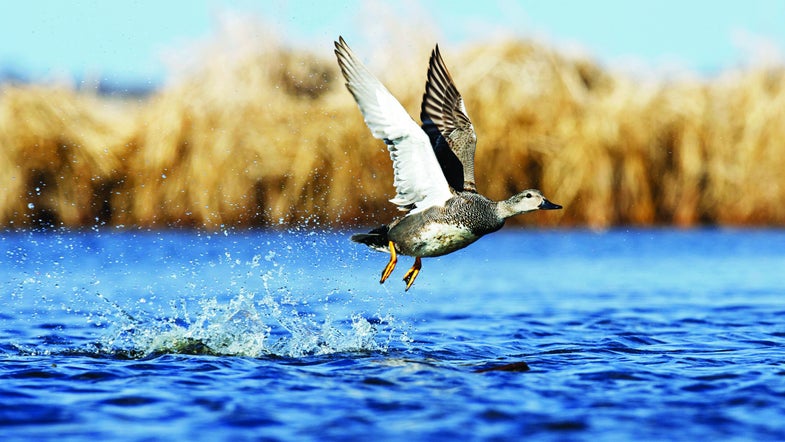 Gadwalls don’t get much respect. When plumage was being handed out, the gadwall must have paddled in at the end of the line. But gray ducks are certainly subtly beautiful and exceedingly fun to hunt, worthy of every waterfowler’s effort.

Gadwalls readily come to calls and decoys. And they’re big enough that they make a pleasing splat on the water when you drop one. And on top of all that, they’re good to eat. What more could you ask for from a duck?

Though gadwalls rank third in annual harvest estimates, most hunters who bag one don’t know what they have, thanks to its unremarkable plumage.

A drake gadwall weighs about 2 pounds. His intricate herringbone pattern of feathers looks like fine art, and a steep forehead creates a regal appearance. Chestnut-colored wing patches add a touch of color, as do feet colored like yellow rain boots. Drakes and hens sport white specula (the only puddle ducks that do), and the drab hen’s black-and-orange bill differs from the drake’s slate-black one.

Gadwalls are big-water puddle ducks. They love wide-open spaces but will readily winter in cypress swamps and flooded timber. Gadwalls feed on leafy-green submerged and emergent vegetation such as duckweed, pondweed, wigeon grass, and algae, plus seeds from pondweeds, smartweed, and bulrushes. That’s why these ducks taste great, migrate well ahead of harsh weather, and are best hunted over water.

On certain days, gadwalls will come to calls on a string. A gadwall hen’s call is similar to that of a mallard hen, but it’s more nasal. Drakes make short quacks that sound like gek, bek, or beep, and are also very nasal. Some hunters call it the gadwall grunt, while others claim it sounds like a miniature pig oinking.

Because gadwalls don’t naturally call loudly, use a mallard call to grab the attention of these gray ducks from a distance. When the birds turn and show some interest, go to work on a gadwall call, such as Haydel’s GW-01, to produce that choppy bek-bek grunt and coax the ducks in.

Gadwall decoys are another key to success. Greenhead Gear and Carry-Lite make good ones, and MOJO makes a gadwall spinning-wing fake. Mix up your spread a little with a few spoonbills and green-winged teal, which frequently hang out with gadwalls.

On big water, you’ll need a large spread of three or four dozen blocks. For gadwalls in the open, lots of birds equates to safety. But a lot of gadwall hunting is done in potholes in marshes.

In this small water, spread 18 to 24 decoys in small groups of four to six, and leave gaps in between as landing zones. A couple of drake mallard or pintail decoys can add color to help attract the gaddies.

Consider adding a few coot decoys to any gadwall spread as confidence builders. Like wigeon, gadwalls will often hang around with coots, following along and thieving the greens the coots pull up as they feed.

Scouting is essential for successful gadwall hunting. Get out and see what the birds are doing and where they want to be.

In the prairies, this means lots of driving and glassing to find out which sloughs and marshes are pulling in the birds. Farther south, it means walking or boating your area and watching where ducks are dropping in.

Here’s a simple and delicious way to prepare a couple of gadwalls—or a half dozen for a crowd. Slice up a couple of large onions. Coat a roasting pan with olive oil. Place plucked birds breast-up on a bed of the onion slices. Season the ducks with sea salt, cracked pepper, and rosemary. Add a half cup of chicken broth to the bottom of the pan, throw in a few potatoes and carrots, and cover tightly with aluminum foil. Bake in a 350-degree oven for 2 hours.