Fishing Tips: Why You Should Try Catching Crappie from Kayaks

Tim Moore’s an amicable guy, but the New Hampshire guide values solitude when chasing tough summer crappie. That’s why he... 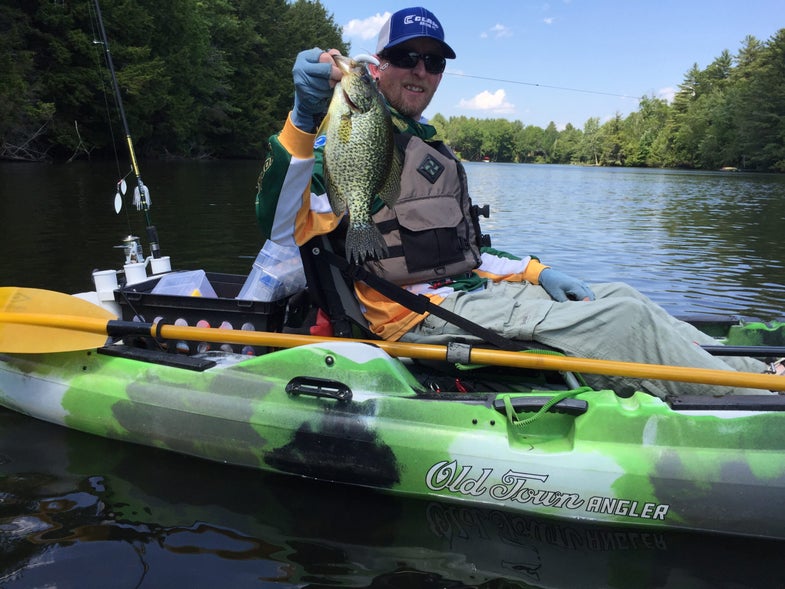 Tim Moore’s an amicable guy, but the New Hampshire guide values solitude when chasing tough summer crappie. That’s why he opts for pursuing his freckled quarry via paddle power.

Not only can he slip in and out of areas too tight for motorboat traffic, he can also fish waters the boat crowd can’t even reach.

“Most of the waters in New Hampshire have crappie, but not all of the waters in the state have a boat launch,” Moore explained. “With today’s angling kayaks there are fewer limitations than ever before. What kayak anglers lose by not having a motor, they make up for in their ability to launch almost anywhere.”

“You are close to the water and a kayak has a much smaller profile than a boat,” he said. “In the early summer you can spook fish out of an area, so the smaller profile of a kayak gives a huge advantage.

“In the fall, the smaller profile of a kayak also catches less wind, which allows me to stay on top of a school longer.”

For early summer crappie, Moore likes a pearl Daddy Mac Lures Whisperer rigged on a 3/0 Trokar offset hook – basically an unweighted Texas rig. He’ll cast the bait into structure, work it with subtle twitches and look for most of his bites during pauses between twitches.

“Not all structure will have crappie on it in the early summer, so I try to cover as much shoreline as possible until I catch one,” Moore said. “Crappie are almost never alone. Once I find one fish, I concentrate my casts more closely together and almost always find others in the same area.”