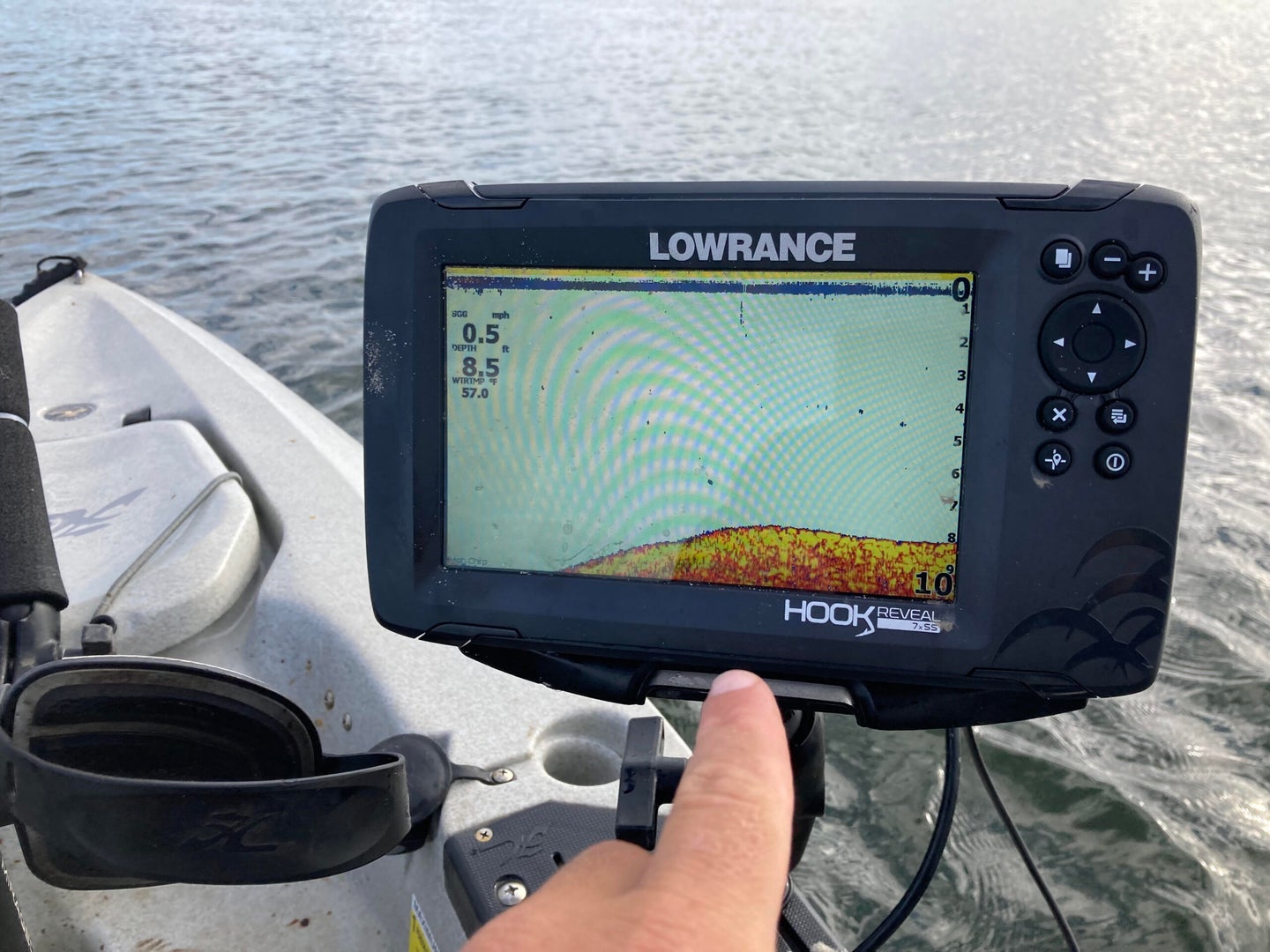 The Lowrance 7 Reveal's sonar is clear out of the box. Elias Vaisberg
SHARE

I’ve been fishing from a Hobie kayak for over 11 years, and when it comes to a fish finder GPS for a kayak, the Lowrance Hook Reveal 7 Splitshot is a rugged and reasonably-priced option. Lowrance Ready transducer plates have been on Hobie kayaks since 2015 and are recognized by many as a “kayak friendly” fish finder and GPS for many reasons. For this Lowrance Hook Reveal 7 Reveal Splitshot review, I spent a month testing this fish finder on my 2021 Hobie Outback.

Testing the Lowrance Hook 7 Reveal Splitshot on the Water

Installing a Lowrance fish finder on any Hobie kayak after 2015 can be done in about an hour and only requires a screwdriver and cable tie. All accessories for installation of a Lowrance are available on the Hobie kayaks directly from the manufacturer or can readily be purchased as aftermarket accessories. I installed the 1.5-inch RAM Mounts Universal Ball and Socket Electronics Mount to the fish finder housing along with the Hobie track compatible 1.5-inch RAM Ball Track, so I wouldn’t have to drill holes in my kayak. All the Hobie Outbacks from 2019 onward and Hobie Pro Angler kayaks have these rails for that purpose. The 7-inch screen sits on the right side of my kayak and is large enough to get a good view while not stressing your eyes out. Another benefit of the Ram mount is that it allows you to fold the fish finder down, so you won’t kick it entering or exiting your kayak. Adjustable positioning is a breeze on this system, as well.

The fish finder wires all run through the pre-drilled holes in the Hobie kayak and connect to the fish finder through the hull. The battery to power the fish finder is placed in the hull and mounted to the sail mast of my kayak via the Hobie Battery holder. With a 10 Ah Dakota Lithium battery I get at least 12 hours of use from the unit in favorable weather conditions. I highly recommend using a lithium battery, because the performance is greater than a lead acid battery. Dakota Lithium batteries have the best performance in my testing experience and an excellent warranty to back the battery up. Lithium batteries are also lighter, and this battery weighs less than 3 pounds.

After start-up the fish finder pretty much runs without any additional interaction. For most anglers, the default settings will suffice for navigation purposes and locating fish. The Downscan feature gives an alternative image of the ocean floor while using color coding to show fish marks. I used the Hook 7 Reveal jigging deep flats for white perch and largemouth bass in brackish water. The fish showed on the sonar clear as day on the default setting, and I was able to make out submerged trees and ledges as well. I didn’t change anything from the factory default and was clearly able to view fish while catching them.

What the Lowrance Hook 7 Reveal Splitshot Does Worst

I find the Lowrance connectors to be extremely fickle. The pressfit gaskets are supposed to keep water from wetting the pins, but any moisture or dielectric grease forces the power cable to push out and makes it unable to power on. I prefer Lowrance’s old twist and lock system to the rubber gasket method. If you leave your fishfinder connected all the time, then this isn’t an issue for you.

I also wish Lowrance Hook 7 had basic pre-loaded maps in all their units like they did with the Lowrance Mark 4 series from 2008. While their old maps aren’t as up to date as Navionics, they were still good enough for you to navigate through island chains and channels. This unit does not accept the Navionics chip like my battle torn Lowrance Hook 7 Tripleshot, so I had to manually enter my coordinates instead of extracting them from my SD card from my old Lowrance. This unit still has the plotter function technology, but it isn’t convenient for me to enter over 700 waypoints for a decade’s worth of fishing. If you use your GPS to navigate back home, the trails that save during your trip should be all you need.

Lowrance fish finder load time and screen refresh delays are also frustrating. If I am loading my kayak with fishing gear and power on my fish finder in the parking lot, by the time I wheel the kayak down to the water and get on it, it won’t read my transducer, and I have to restart the unit and wait a few minutes before the transducer connects.

What the Lowrance Hook 7 Reveal Splitshot Does Best

I don’t need to stress about operating my fish finder while I’m trying to fish. Thankfully, Lowrance electronics have a user-friendly interface. An enter button, a back/cancel button, zoom in and out, and directional buttons get the most action. You can swap views by pushing the page button on the left part of the screen. If you have coordinates for fishing spots you can easily enter them into the GPS, and saving a new spot or waypoint is also easy. You can mash the enter button three times while in operation to store the waypoint. Zooming in on the GPS trails and the Downscan view is easy and trouble-free as well. The GPS locator is extremely responsive to your kayak’s movements and detects turns and incremental movements precisely. The fish finders frame and screen are rugged, and, like previous models, I’ve never cracked a Lowrance screen or damaged the external housing after years of heavy use in saltwater environments.

The price of this Lowrance GPS and fish finder is an attractive sell to many anglers. Kayak fishing is obviously a wet sport. Spray is a constant and there’s always the possibility of totally submerging the fish finder. I personally fish under the school of thought that things break periodically and need routine replacing. More budget friendly items tend to outshine their expensive counterparts, and this unit comes with a one-year warranty. Lowrance also offers a buy-up upgrade after the warranty expires.

Lowrance has designed reliable performance products for Hobie kayaks years. Most anglers will enjoy having this fish finder/GPS combo on their kayak. The usability and interface are still one of the biggest draws for me a decade later. When I’m on the water I want to focus on fishing, not guessing which button I need to push, and the Lowrance Hook 7 lets me do that.

Read Next: Best Fishing Kayaks for Every Type of Angler