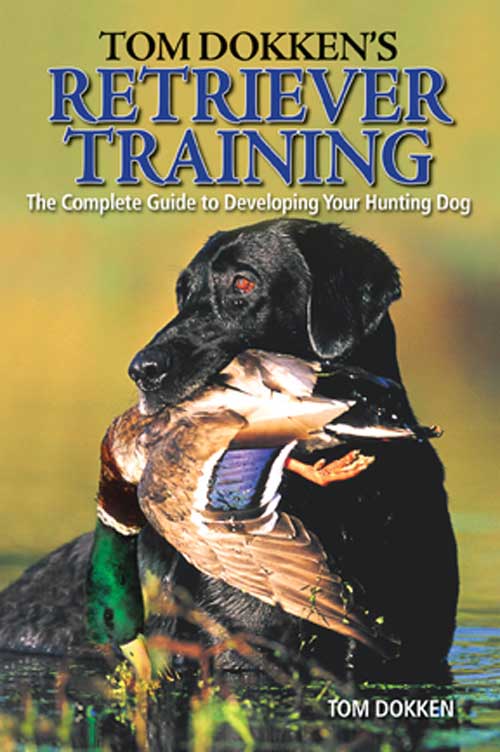 Tom Dokken knows dogs. He’s been training field trial and hunting dogs for more than 30 years, invented the Dokken Deadfowl Trainer (a staple in all retriever-trainer’s bags), has given seminars across the country and owns one of the largest all-breed hunting dog training facilities in the country. To top it off, he and his wife, Tina, are among the nicest people you’ll ever meet.

His new book, “Tom Dokken’s Retriever Training: The Complete Guide to Developing Your Hunting Dog“, is a work of art. Not only is it filled with clear step-by-step instruction on developing a hunting dog (from your first day together through force fetch to teaching handling; approximately the first year of training), it’s produced on high-quality paper with incredible color photos illustrating every point.

Introducing “Pressure On, Pressure Off”

“Remember that every time you are with your puppy you are training. It starts when you are holding him and he starts to struggle because he wants to get down,” says Dokken. “Don’t give in. Instead, when he starts to fight, hold him against you, and if he starts to struggle harder, increase the pressure even more by holding him just a bit tighter against your body. Once he quits fighting you, release the pressure, and after he remains still for five seconds you can then set him down. He’s learning that you won’t accept that type of behavior. You are showing him that only when he complies will he get his way. Just think, during the first minute you hold your new pup, you have an opportunity to teach a lesson that will stay with him his whole life.”

Dokken says that you, too, learn something in this first minute of meeting: what kind of pup you’ve chosen (headstrong or soft) and how much pressure he needs to be compliant. He says you should repeat this exercise several times a day for three or four weeks and advocates that the entire family practice the drill to help teach pup his place within the family/pack.

Not only is it an exercise in psychological domination, it’s your pup’s first experience in learning to turn pressure off–something that’s very important, especially if you’re going to train via a force-type program.

“When a puppy tries to get his way and fails, he will stop for just a split-second while he tries to figure out another avenue,” says Dokken. “In the example I just gave where he is struggling to get down, when he stops struggling I don’t set him down, but I instantly lighten my hold on him. And in that brief moment, he has learned that compliance stops pressure.”

And that is what I find so cool about this little drill. You can use it to set the stage for future training from the very first moment you meet your dog! Of course, you have to follow through consistently in all other avenues of daily living and training, but this is one of those little things that you can easily use to hardwire your dominance and way of life into your pup’s little brain during that all-important imprinting period.

“I can’t overemphasize the importance of this concept,” says Dokken. “Soon you will be introducing other forms of pressure into obedience training, which could come via a leash, check cord or electronic collar. The type of pressure will change as you progress in your training, but the concept of pressure on, pressure off is constant.”