English setters and pointers (especially those that won’t hold point), Labrador retrievers, hounds such as hard-running beagles, Brittany spaniels, and... 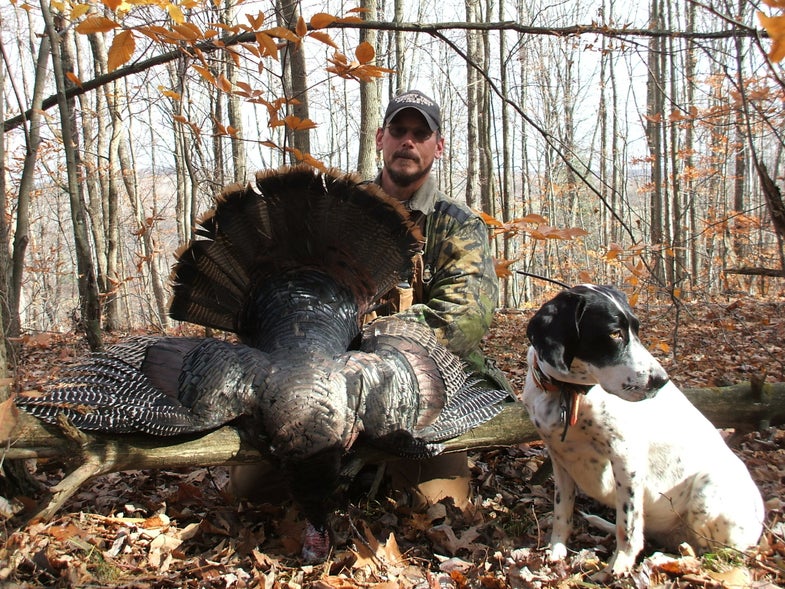 English setters and pointers (especially those that won’t hold point), Labrador retrievers, hounds such as hard-running beagles, Brittany spaniels, and even mixed breeds are capable of becoming decent turkey dogs, assuming you take the time to hunt that dog where it’ll find flocks. Boykin spaniels were bred historically in the Carolinas for turkey dogging, though ironically South Carolina offers no modern fall season, and North Carolina provides only a winter option. Still, this breed is used in other parts of the country where the tactic is legal, and is particularly effective in smaller woodlots where this short-legged canine can find and flush flocks.

Sometimes the intention is more deliberate. Bred by John Byrne and his son J.T. of Lowry, Virginia, Appalachian turkey dogs are from a pointer/setter/Plott-hound line developed specifically for fall turkey hunting. Apart from this willful breeding effort, turkey hunters can still chance at finding a cast-off dog that possesses the nose to find flocks, and the desire to flush them. Training a turkey dog — any bird-finding canine for that matter — is based on two things: showing the dog what you want it to do, and reading that animal’s natural abilities for what it might offer in the field. The marriage of these two components makes for a reliable hunting partner.

Are you a serious fall and winter turkey hunter? Do you live in or near a state that permits the strategy? Do you have locations where you can condition and train your dog in the off-season? To use your dog as a tool during the hunting season, you have to spend the rest of the year training it, and enjoying that canine’s company.

Ideally a turkey dog should cast ahead, check back to your position, and find flocks. When it locates birds — either by foot, airborne scent, visual contact, or all three — the dog should run at the birds, bark to declare the flock’s position, then chase down singles, and lingering turkeys into the air. After the flush, the dog should consent to blind time as you call birds back. Concealed in a camouflage bag (a John Byrne innovation) or behind blind material or both, the dog should rest calmly as turkeys approach your position. Trying to hide the dog in the blind from the wary eyes of regrouping turkeys sometimes offsets the flushing advantage. That’s part of the challenge.