Is Your Dog a Democrat or Republican?

According to a recent opinion piece on politico.com, your dog is a democrat and all the cats out there are... 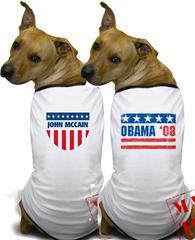 According to a recent opinion piece on politico.com, your dog is a democrat and all the cats out there are republicans.

The author, Keith Koffler, makes a very tongue-in-cheek argument for why he believes felines are freedom-fighting, tax-hating individuals and canines are bleeding-heart liberals happy to subvert control and trust to Big Brother.

While I see, understand and even agree with some of his hypothesis, there is a major flaw in his logic when it comes to gun dogs.

The summary point Koffler makes is that you can’t make a cat do anything. It’s going to do what it damn well pleases. Meanwhile, a dog will do anything and for next to nothing. Many of his examples accurately represent the stereotypes we place on each other’s political leanings.

However, being the contrarian I’ve been accused of, I’d have to disagree with him on a few points. Namely, dogs are willing to work for their wages while cats rely upon entitlement programs.

Think about it. Working dogs put in endless hours of training, work diligently whenever called upon and will literally work themselves to death for the pittance of a roof over their head, a full belly and enjoyment spent with friends and family. It’s truly the American way.

Felines on the other hand do nothing all day and expect others to provide their meals and clean up after them. It’s truly the way of entitlement.

My Lab, Kona, trains hard when called upon and works even harder throughout hunting season. He follows complex directions that often conflict with his own survival instincts but that will pay dividends later. His higher education allows him to enjoy a fuller, richer life while contributing to society at large – the family, as well as environmental and conservation movements.

Any cat I’ve had or encountered has been just the opposite. It’s pawing at me, looking for a handout in the form of a scratch behind the ear or down the spine for doing nothing. It doesn’t just hope you’ll feed it, entertain and provide for it; no, felines expect handouts in the form of kibble and pats on the back for doing nothing… and then it insists you clean its litter box.

From where I sit, canines most definitely furnish their blood, sweat and hard-earned tax dollars to the societal good while cats sit back and take advantage of entitlement programs offered by Big Brother.

Koffler does make a great point with his last two paragraphs, however: “This doesn’t make dogs Republicans or cats Democrats. It just means that sometimes they can see the other side’s point. Which of course makes them each wiser than their elected representatives in Washington.”