Ruger’s new Gunsite Scout rifle has had rifle geeks of all stripes in a twitter since it was introduced earlier... 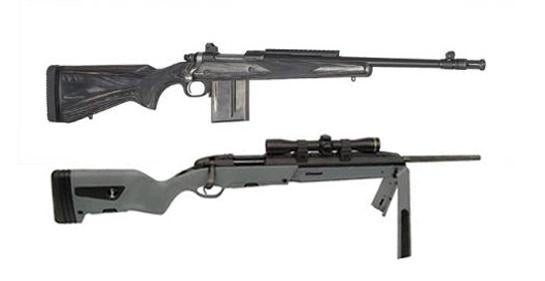 Ruger’s new Gunsite Scout rifle has had rifle geeks of all stripes in a twitter since it was introduced earlier this year and for good reason: It is a well-built, accurate and affordable take on the scout rifle concept as originally pioneered by Col. Jeff Cooper, the founder of Gunsite Academy. Plus, it was built in conjunction with Gunsite instructors–the keepers of Col. Cooper’s flame.

It’s such a nice rifle, in fact, that we gave it our prestigious “Great Buy” award during Outdoor Life’s annual gun test this year. I considered that rifle such a good value that I bought it for my personal collection.

All this adoration heaped on Ruger’s newest hasn’t gone unnoticed by Steyr, the makers of the original scout rifle, and now the company has decided to fire back, claiming primogenitor and talking smack about both the Ruger rifle and ARs in general. This is from a press release put out a couple days ago:

“With the rage over modern sporting rifles–or “mouse-guns” in Col. Cooper vernacular–and their increasingly burdensome array of accessories waning, common sense has seemingly returned to the American rifleman, as the Colonel’s lightweight, .308-caliber bolt-action, rabbits-to-elk, bug-out Steyr Scout rifle has eclipsed its initial sales figures. It’s become so popular within the last 13 months that yet another company has made an attempt to emulate Col. Cooper’s intent.”

Zing! The biggest problem with the Steyr was its price. It is loaded with cool features, like and integral bipod and a butt stock that accepts an extra 10-round magazine. When you add stuff like that to a gun, the price heads north. And when that gun is made by Austrians, the price leaves orbit.

Right now Steyr is offering the Cooper Scout with an MSRP of $2,099. The Ruger is going for $995. Is the Steyr twice the rifle that the Ruger is? I’m not sure, but I aim to find out and do a side-by-side shootout as soon as possible.

This is Steyr’s parting shot: “So go ahead, and accept a substitute. Colonel Cooper didn’t.”