The fastest growing segment of the sporting-optics market is electronic illumination of a scope’s crosshairs. And it may be the... 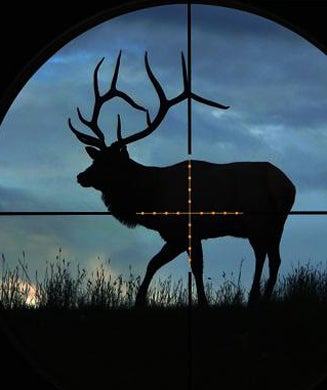 The fastest growing segment of the sporting-optics market is electronic illumination of a scope’s crosshairs. And it may be the most useless hunting-gear gimmick since the DeerView Mirror, a backward-looking reflector for your treestand. Check out the lineup of new scopes at your sporting-goods store. I’ll bet more than half have a bulbous illumination knob above the eyebox or opposite the windage and elevation knobs, distorting the otherwise lovely lines of the optic. But illumination modules also add weight, as well as a mechanism to fail and a battery to die.

Red is the most common illumination color, but a number of scopes also feature green and blue. And instead of illuminating a subtle aiming point, most of these battery-powered units light up the entire reticle like a Christmas tree on fire.

Illumination is a great asset on some scopes, like the low-magnification optics used on ARs for short-range work, such as clearing dark, dangerous houses. But here’s why they’re worse than useless on higher-magnifying big-game hunting optics:

– Legal light for most big-game hunting is a half hour before sunrise to a half hour after sunset. Outdoor Life’s annual optics test has revealed that all but the cheapest, darkest glass is bright enough to resolve antlers, vital areas, and aiming points even several minutes after legal light fades. Not only will most glass let you “see” into the dark, but most non-illuminated reticles are visible long after legal light has ended.

– Any illumination brighter than a barely perceptible point will ruin your night vision. Yet many of these reticles are calibrated for high intensity, not subtlety, forcing shooters to concentrate on the blazing crosshair instead of the dim target. And when a reticle is awash in light, the optic glows with so much internal reflection that precise shooting becomes increasingly difficult as ambiant light fades.

– Artificially illuminated aiming devices are illegal for big-game hunting in some states. Even if you never turn on the illumination, its presence on your rifle could be setting you up for an avoidable wildlife violation.

– Building a bright, clear optic is difficult and expensive. Instead of investing in optical technology, scope manufacturers that turn to high-intensity illumination are grabbing market share with the luminescent equivalent of bells and whistles. Savvy hunters would do well to spend their money on good glass, not electronic gimmickry.