These are our picks for the best rangefinding binoculars on the market. 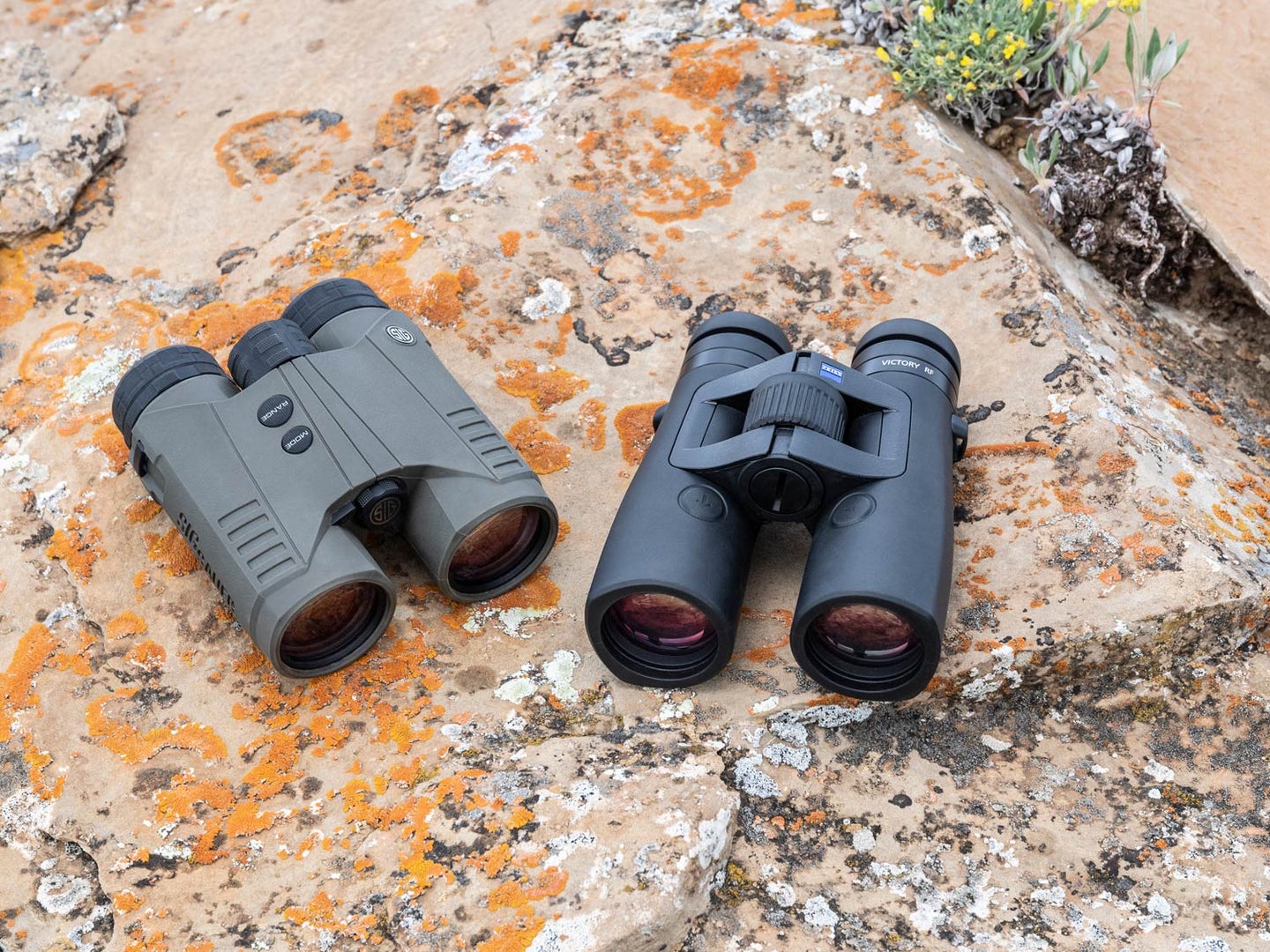 These are our picks for the best rangefinding binoculars on the market. Bill Buckley
SHARE

We reviewed most of the laser rangefinding binoculars on the market to provide prospective buyers with a sense of the capabilities of all units, not just those new for this year. We created a course of targets varying in surface type and distance from 10 yards to 5,000 yards. We used Steiner’s military-grade M830r rangefinder, capable of ranging targets beyond 6,000 yards, to set standards for each distance, then measure each submission’s ranging power, precision, and processor speed against the Steiner.

This rangefinding bino does almost everything right. Its fluorite glass is among the best in the field. Its balance and ergonomics are so nimble and its profile so slim that it’s hard to believe there’s a laser and processor in its guts. Its ability to connect to a mobile app through Bluetooth was the final detail that pushed the Victory RF to our top spot of 11 units in our laser rangefinding binocular test.

The Zeiss is not quite perfect. The ranging button, out on the right-hand barrel, caused testers to lose their grip on the optic when activating the rangefinder. And the processor, especially in scanning mode, is slower than we’d like. Also, it’s very expensive (although the nonranging Victory binocular costs $2,800).

But the laser is powerful­—we routinely ranged non-reflective targets to 2,100 yards—and precise. The Zeiss has the full gamut of modes, and the mobile app allows users to load specific ballistics data in the Victory RF’s brain.

Lightning-fast, fully compatible with SIG’s BDX ballistics software, and extremely customizable, the KILO3000BDX is one of the most complete integrations of electronics and optics that we’ve seen. Its ability to deliver very good image with an excellent rangefinder for $1,200 makes it a worthy Great Buy award winner.

The Nikon, Vortex, and SIG ranging binoculars share many of the same internal components and exterior architecture (and price). The three share similar optical scores too. But the SIG stands alone in that it connects to a mobile app that allows users to download specific ballistics. Its laser is also more powerful. We ranged nonreflective targets out to 2,822 yards (2,312 to reflective targets), and the unit detected a greater variety and size of soft targets than its peers.

The unit features the full suite of modes, including angle-modified ranging, line-of-sight ranging, and range modified by information from Applied Ballistics’ library of bullet dynamics.

This long-anticipated rangefinding bino has the most complete software package in our test, including separate rifle and archery modes and the ability to input wind holds. It displays holds in MOA or mils, as well as standard holdover values. It does not connect to an app or external device; instead, users match their rifle load to one of 26 ballistics groups in the unit’s library.

The optics are excellent, placing the Leupold just behind the high-end European brands. The laser is very good, giving us readings to 2,600 yards on soft targets and as close as 5 yards in archery mode. The processor is quick, especially in its excellent scan mode. If we have any gripes, they are the weight and squarish profile, as well as the complicated menu operation.

Read Next: How We Test Hunting Optics

With its exceptional glass (it produced the best image in the test) and wonderful ergonomics, this Swarovski has been on the market for eight years. It’s had some upgrades in that time, including the vivid orange armor of our sample, and some improvements to its laser and processor. But the “baby bump” distensions on its belly remain, as does its relatively slow ranging speed.

The laser is adequate—we ranged reflective targets to 1,800 yards and nonreflective targets out to 1,600 yards—but with a minimum distance of 33 yards, it’s not ideal for bowhunters. We also like its ability to match ranging with ballistics from a suite of caliber families, and its grippy open-hinge design.

From the company that pioneered rangefinding binoculars, this updated version of the venerable Geovid took the top spot for optical quality. Its ergonomics are also among the best in the test, with curvaceous lines and a very wide field of view defined by its revolutionary Perger Porro prism.

But its rangefinder hasn’t quite kept up. The response time is slow, and while we managed to range distances out to 2,434 yards (the company claims 3,000 yards), the Leica is at its most precise on targets inside about 800 yards and as close as 10 yards. Modes include line of sight and angle compensation, plus it delivers holds that correspond to clicks on the turret of a riflescope.

This is an adequate rangefinder housed in a decent binocular, but the name may be a bit misleading. We managed to range reflective targets out to about 1,500 yards and nonreflective targets a bit beyond 1,200 yards. More impressive is its close-ranging capability. We ranged targets just inside 2 yards, making it an excellent choice for bowhunters.

The Vortex has a wide range of modes, its display provides a good amount of information without appearing cluttered, and the “horned” reticle is fast and precise. We also liked the super-quick scanning mode. But we’d like to see more positivity of the operating buttons, and connectivity to a ballistics app.

The processor speed is adequate, the display is clean, and the ED glass is bright. But the unit is missing some important capabilities, including the integration of a ballistics calculator and the ability to switch ranging modes between first or best target. The LaserForce does have a very good angle-compensating ranging function.

A new rangefinding binocular from a relatively new brand, the RangeGuide won the low-light portion of our test thanks to its big 50mm lenses, though the image showed noticeable peripheral distortion. The rangefinder’s operation is basic, with best- and last-target modes and either line-of-sight or angle-compensating ranging, but it lacks a ballistics library or the ability to connect to an app or an external data source.

The rangefinding capability of the GPO, which stands for German Precision Optics, is pretty good. We ranged reflective targets out to about 1,900 yards, not the 2,800 yards GPO claims. Our close-target limit was 6 yards. We like the precise circular reticle and clean display, and while the scanning return is precise, it is also glacially slow. The length and forward-heavy balance of the unit makes it hard to hold still, but it works well when mounted to a tripod.

A bare-bones ranging binocular, the Steiner is a little out of phase with contemporary design and performance. First, the binocular: This is a version of the auto-focusing Predator that appears in our midsize binocular test. The porro-prism design balances well in hand, but it’s bulky, and the 30mm objective lenses don’t gather nearly the same amount of light as the 42mm units in our test.

The rangefinder is sluggish and limited in its reach. The farthest target we ranged was a bare hillside at 1,231 yards; minimum distance was 22 yards. We loved the precision of the circular reticle—we ranged an 8-inch steel plate at 820 yards—and the display is clean. But the processor is very slow and doesn’t include any of the modes that most rangefinders offer, including an angle-compensating range, the ability to toggle between first and best target, or a ballistics interface. The porro-prisim design, while bulky, is among the easiest in the test to hold steady.

Compared to a standard binocular, binos containing laser rangefinders use different lens coatings, generally a shade of aqua green, to boost the visibility of the red LED (light-emitting diode) display that fires up when you hit the ranging button. Sightmark’s Solitude doesn’t have the additional coating, because the LCD (liquid crystal display) is a permanent fixture in the image. It occupies the bottom third of the right-hand barrel, with a horizontal bar separating the reticle and display from the remainder of the image.

We’d overlook that clunky display if the rest of the device was up to snuff, but while we got a maximum range of 936 yards, testers were unable to consistently range smaller targets inside 600 yards. Minimum distance for us was 6 yards. The price is certainly appealing, but the unit doesn’t have angle compensation, target-priority modes, or a ballistics interface, and the image is underwhelming.

Why include it in this lineup? Because it’s also indisputably cool, and an incredible tool for hunting hogs or predators at night. The heart of the Accolade is a sensitive and tunable thermal sensor capable of picking up heat signatures out to 1,450 yards (the company claims 2,000 yards) in complete darkness. The rangefinder, tied to the thermal image, is capable of delivering precise ranges of larger targets to about 1,100 yards. The display can be magnified up to 20X, and different colors and contrasts can be used to increase target resolution. You can record the display and stream it to a device using onboard Wi-Fi.