5 Fixed Focus Hunting Scopes, and Why You Should Consider Using One

Is it time to rescue fixed-power riflescopes from oblivion? 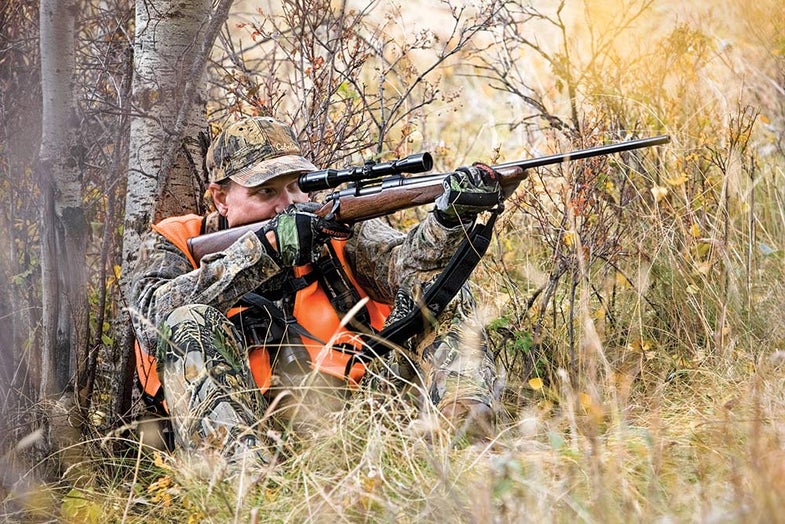 My first centerfire rifle was a Savage 99 in .243 topped with a 4X Bushnell Banner.

That fixed-power optic is about as simple as riflescopes get, the next step up in evolution from peep sights. It has an unilluminated duplex reticle and capped turrets for windage and elevation. Though I’ve retired it, I have killed more animals with that rifle-and-scope combination than with any other I own, for reasons of both utility and familiarity (and also because it was the only deer rifle I owned for several years).

Because it has so few moving parts, that old Bushnell is durable (after three decades, it’s still mounted on that Savage and still holds its zero). Because it has only a handful of sight references—basically the coarseness of the reticle and the taper in the duplex—making holdover adjustments is fast, if not particularly precise.

Familiarity is another asset. Like a shooter who is to be respected because he wields only one gun, a hunter who becomes accustomed to the unchanging sight picture through a fixed-power riflescope tends to get on target faster and with more certainty than a shooter who fiddles with magnification and parallax adjustment in the heat of the moment.

Putting aside subjective considerations of habit and preference, there are some strong objective reasons to reconsider fixed-power scopes. Chief among them is optical brightness. Because they contain fewer lenses, fixed-power scopes tend to be brighter. You’d notice the light-transmission benefit if you put a fixed 4X next to a 3X–9X (the latter set at 4X) at twilight, but I have actually measured the difference. At 4X, the fixed-power scope is about 8 percent brighter than the variable. At 6X, the benefit is about 12 percent in favor of the fixed-power model. As you move up in magnification, the brightness benefit increasingly favors fixed-power models.

Another objective benefit of fixed-magnification models is their shorter eyepiece, due to fewer power-changing lenses, which allows them to be mounted farther forward on the action. For heavy-recoiling rifles, this advantage of even a few centimeters can be measured in fewer “Weatherby eye” gashes caused by a scope’s eyepiece meeting a shooter’s brow under recoil.

Like many shooters, I’ve been seduced by evolutions in the riflescope category. Independent focus achieves a parallax-free and tack-sharp image at any distance; zoom range has been enlarged from 3X magnification all the way up to 6X and even 8X magnification ranges. Simple crosshairs have been replaced with sophisticated ranging reticles designed to work in concert with turret systems tuned to subtensions expressed in inches, milliradians, and minutes of angle. In many models, the reticle can be illuminated with various degrees of battery-powered intensity.

The confluence of all that technology has made riflescopes more effective aiming instruments than ever. And in practiced hands, they are capable of helping a shooter place projectiles with greater precision and repeatability than older, more basic scopes could. But all that adjustability creates complexity. And complexity can be a liability in snap-shooting situations, where you need to acquire the sight picture, judge the hold, and make the shot in fractions of a second.

Then there’s price. Variable-power scopes tend to cost anywhere from two to three times as much as fixed-power models of the same brand.

Of course, that assumes you can still find a fixed-power scope to buy. Only a few manufacturers still make them, and those that do tend to offer only one or two configurations.

While some manufacturers have brought out very effective fixed-power optics—Trijicon’s 4X ACOG weapons sight is one of the best—traditionally configured scopes are about as scarce as Malibu estates with “Welcome Hunters” signs. The models here—all of which feature second-plane reticles inside 1-inch tubes—are among the survivors of an unfortunately neglected, but extremely capable, class of riflescopes.

The massive exposed turrets and mil-dot reticle on this 10X Bushnell are configured for target use. But the lack of parallax control and a first-plane reticle, and relatively limited elevation adjustment, handicap it for the range of adjustments required for longer-range precision work. The Elite LRS has a bright exit pupil of 4mm and a wide field of view of just over 10 feet at 100 yards. ($350; bushnell.com)

The K6 hasn’t changed much in half a century, and frankly it could stand an upgrade. It still has turret knobs that are maddeningly hard to turn without a coin or a tool, and in order to focus the reticle, you must rotate the entire eyepiece. But the 6X model has a beautifully wide 18.3-foot field of view at 100 yards, and the tube has ample mounting dimensions. ($260; bushnell.com)

Hawke would be better off with a standard duplex reticle inside this very capable scope. The reference dots in this “mil-dot” configuration are not quite to spec. But the rest of the scope is well-executed. It sports parallax focus on its objective bell—a rare feature for a fixed-power riflescope—and it has a whopping 28.5-foot field of view at 100 yards. ($80; hawkeoptics.com)

This is a wonderfully versatile scope—at home on a deer rifle, a slug gun, a rimfire, or even a turkey shotgun. The Circle-X reticle is a fast, accurate aiming point. The Banner’s wide field of view (31.5 feet at 100 yards) and fast aiming point would make it a good choice for a dangerous-game hunter on a budget. ($80; bushnell.com)