You’ll have to eat your spinach to heft them (or invest in a sturdy tripod), but the newest class of... 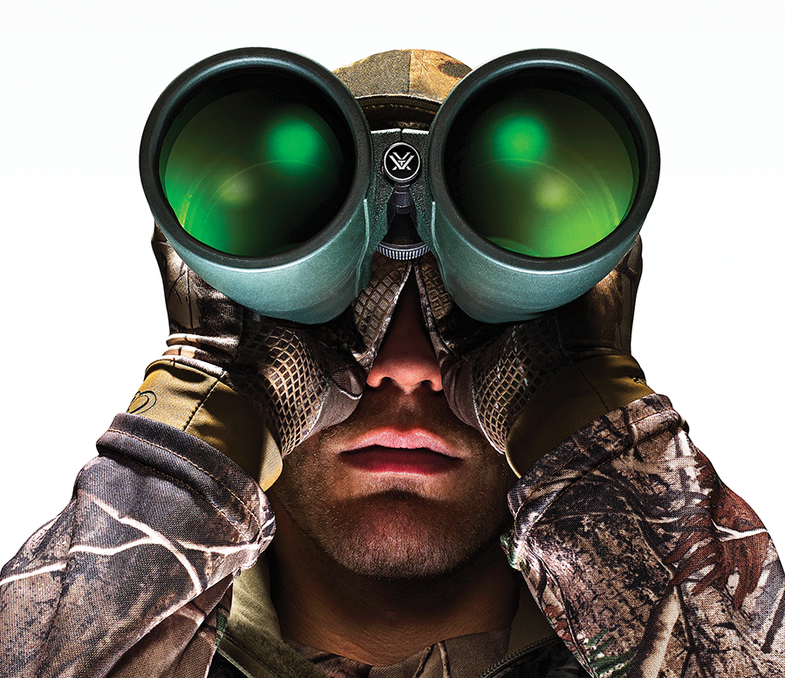 You’ll have to eat your spinach to heft them (or invest in a sturdy tripod), but the newest class of 15X optics is filling the gap between standard binos and spotting scopes.

Maybe it was inevitable. After building almost every possible combination of 8X and 10X binocular, the optics industry this year grew up and out, with many brands introducing 15X (or 16X) binoculars built around huge 56mm objective lenses.

This type of large-framed roof prism binocular is not new. It has been employed by Western hunters for years to scan mid-distance terrain, typically for Coues and mule deer. Attached to a tripod to dampen shaking and facilitate panning, the optic allows for both-eyes-open glassing, enabling any hunter to scout open ground more effectively than he could with a hand-held bino, and with less eye fatigue than with a spotting scope.

But these 15x56s have essentially been niche optics. This year’s profusion of the el grande binocular suggests they may be going mainstream. We reviewed five of the newest models to find out if their optical performance is worth the heft and bulk.

Swarovski
SLC 56 **
**Editor’s Choice
▶ A bulked-up version of the classic SLC, the 15x56mm version has the best balance of the field, and we liked the pebbly grip, thumb detents, and beefy focus wheel. It handily won the resolution test and tied with the Nikon for low-light performance. But the best measure of an oversize binocular is the quality of its periphery, since users scan the image from edge to edge before panning the optic. The Swarovski delivers a crisp image all the way to its edges. For the price, we expected a tripod adapter, but that’ll run you another $100. (Swarovskioptik.com)
Price: $2,777
Weight: 42.3 oz.
Resolution: A+
Low-Light: A+

Oculus
5.0 15×56
▶ The first super-size binocular for this relatively new brand, the 5.0 is adequate for the price, but if you spend tons of time behind this optic, you might be disappointed. We had a hard time getting the image to appear tack sharp, and noted some distracting peripheral distortion. The Oculus scored at the bottom of both our objective low-light and resolution tests. We liked its finish and styling and its big, easy-turning focus wheel, but, again, we wish it came with a tripod adapter. (Oculusoptics.com)
Price: $260
Weight: 42.8 oz.
Resolution: C
Low-Light: C-

Zeiss
Conquest HD 15×56
▶ The most powerful of a family of 56mm binoculars from Zeiss (the other iterations are 8X and 10X), this behemoth is one of the most stylish binoculars in the class, and we liked its slightly forward-heavy balance and edge-to-edge clarity. The quick-release tripod adapter that is included with the binocular is a smart, elegant design that’s also a cinch to use in the field. Optically, the Zeiss was slightly disappointing. It scored in the middle of the pack on both objective tests. (Eagleoptics.com)
Price: $1,600
Weight: 46.4 oz.
Resolution: B
Low-Light: B

Nikon
Monarch 5 16×56
▶ Optically, this big, boxy binocular is on par with glass costing three times as much—it tied with the Swarovski in low-light performance and was runner-up on the resolution range. But the Monarch sees better than it feels. The armor is curiously mushy in hand, and the focus knob is small and imprecise. The eyecups are blocky, making long glassing sessions slightly uncomfortable. On the other hand, the tripod adapter that ships with the Monarch is simple and strong, and can be used on any bino with a standard thread. (Nikonsportoptics.com)
Price: $800
Weight: 43 oz.
Resolution: A
Low-Light: A+

Vortex
Vulture HD 15×56
▶ Vortex has carved out a niche as a favorite brand of Western hunters, largely because it long ago embraced the 15×56 platform with its capable Kaibab binocular. Unfortunately, the new Vulture HD isn’t quite as sharp as its predecessor. The focus is mushy, and the close focus (10 feet) is the worst in the field. Even more damning, our sample had a significant lens imperfection that was distracting even if though didn’t affect optical performance. Here’s yet another massive bino that comes with no tripod adapter. (Vortexoptics.com)
Price: $500
Weight: 43.6 oz.
Resolution: B-
Low-Light: B-

Doubler Vision
If you really want to stretch the capabilities of a binocular, consider sliding an optical doubler onto one of the eyepieces. Vortex’s 2X Doubler increases the magnification of an already powerful 15X optic to 30X, or transforms an 8X into a 16X. The downside is that doubling the magnification halves the exit pupil, costing you both resolution and brightness. But in backcountry situations when you don’t want to carry a spotter, it’s a convenient option. ($170; vortexoptics.com)