A Federal Premium Ammunition employee (who wished to remain anonymous) snapped these photos for us of a new shotshell in... 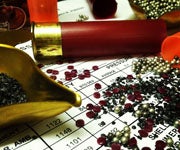 A Federal Premium Ammunition employee (who wished to remain anonymous) snapped these photos for us of a new shotshell in the works. Federal is reportedly putting the finishing touches on a new turkey load that will be available for the spring 2013 season. What do company engineers have up their sleeves?

Thanks to a few tips from my source, I think it’s fair to speculate that Federal is cooking up a turkey load that combines at least a couple shot sizes. There are two ways such shells are typically loaded: as a homogenous mixture, or through what’s known as “multi-plexing,” in which shot is layered by size.

In theory, the smaller shot provides greater pattern density while the larger shot increases downrange lethality — it’s win-win. But in practice, some ammo makers (and this amateur handloader) have encountered difficulties. Consider a two-layer duplex load. If the large shot exits first (as is most typical), you can end up with severe pattern stringing: The thinly spread larger shot reaches the target first, followed shortly by the rapidly decelerating smaller shot. Reverse the shot layers, and the big shot overtakes the small shot midair. Pellets collide. The pattern disintegrates. Cats living with dogs. It’s ballistic chaos.

However, I am intrigued by the idea of a multiplex or mixture of shot loaded in one of Federal’s FliteControl wads, which are shown in all three photos. Unlike a traditional wad, the FliteControl is designed to stay with the payload significantly farther downrange. Can such a wad eliminate the ballistic pratfalls of blended shotshells while maximizing the advantages? I hope we get to find out.