The 3-year-old Osceola just happened to stroll by around midday and, unluckily for him, my friend Mike and I were... 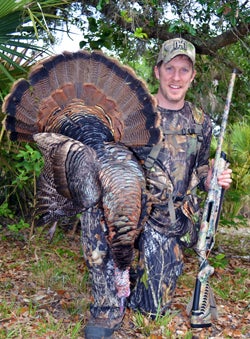 The 3-year-old Osceola just happened to stroll by around midday and, unluckily for him, my friend Mike and I were between naps. Mike rattled off a few quick cuts, and the bird politely raised its head to accept the delivery of Hornady’s new Heavy Magnum Turkey load.

It’s the first gobbler I’ve killed with Hornady’s initial foray into the hunting shotshell market, and so far I’m pleased with the results. I counted a half dozen nickel-plated No. 5 pellets from neck to beak, and they caused considerable damage at a distance of 30 yards. Interestingly, Hornady recommends an improved cylinder or modified choke for the Heavy Magnum Turkey load.

In case you’re one of the turkey freaks with a gun choked so tightly as to let the pellets out one at a time, I’ll give you a moment to process that.

Okay, good, now let’s consider the following: The Heavy Magnum Turkey’s “VersaTite” wad is part of a recent shotshell trend in which wads are designed to stay with the shot charge longer and practically deliver it to the target. Such wads are more robust than traditional designs, and tend to deliver tight, consistent patterns–if allowed to do their job. Tight chokes act almost like wad strippers on the comparatively thick VersaTite wad, hindering its progress and disrupting the shot pattern. (Without going into all the physics, a true wad-stripping choke gently separates wad from shot, sending an ultra-tight charge downrange.)

My initial test of the Heavy Magnum Turkey shell earlier this week was with a Benelli Super Vinci choked extra full (constriction .660), and I can confirm that tight chokes do negatively affect this load. Pattern results with the 1 ½-ounce No. 4 load were, well, not good; however, even choked inappropriately, I would’ve been comfortable stretching the No. 5’s to almost 40 yards. I will conduct further testing with an appropriate choke and report back soon. Given my past experience with the VersaTite wad (it’s also used in Hornady’s Critical Defense buckshot loads), I expect my results to rival Hornady’s claim of 70-plus pellets in a 12-inch square at 40 yards.