Is Federal’s new shotshell as effective up close as it is on hung-up toms? 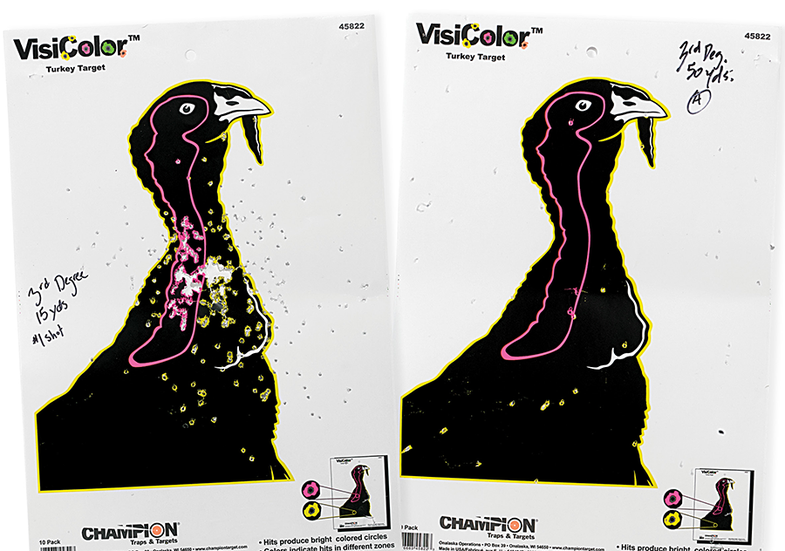 I have reached two conclusions after evaluating Federal’s newest turkey load, an interesting three-pellet smorgasbord designed to smite gobblers both near and far. The first is: This load, called 3rd Degree, is a pretty good close-in turkey killer, a very good mid-range turkey killer, and an adequate long-range turkey killer. The second: You’d better make sure the turkey you are aiming at is standing apart from his pals (or girlfriends), because at 50 yards your lethal umbrella extends a good 2 feet on every side of your target.

Near and Far Lethality
Federal’s 3rd Degree is designed to address a perceived shortcoming of the new wave of ultra-long-range turkey loads: stingy patterns inside 20 yards. At least theoretically, there’s a strong basis for this position. Shotshells that deliver a dense pattern at 50 yards and beyond should be shooting fist-sized patterns at closer ranges. That has been a convenient excuse for hunters who have missed gobblers at spitting distance. By loading a shotshell with three different sizes and densities of pellets, Federal says, its new load delivers forgivingly broad patterns at close ranges, but also killing patterns for those insidiously suspicious gobblers that hang up at 50 yards.

Shooting editor John B. Snow and I tested this claim by shooting patterning targets at both near (15 yards) and longish (50 yards) distances. We both fired six loads of 3-inch 3rd Degree at each target. I fired another six loads of what I consider to be a standard magnum turkey load, Winchester’s Double X in 3-inch No. 5s. Snow’s control shell was Federal’s Mag-Shok Flitecontrol loaded with No. 5s. I threw in a couple of shots of Winchester’s Long Beard XR—one of the new generation of long-range loads—to see how the Federal shotshell stacks up against its peers. I shot a Remington 870 with a factory Extra-Full choke. Snow shot a Beretta A400 Xplor Unico with a factory Full choke.

Close-In Performance
The first pellets to leave the 3rd Degree shell are No. 6 Flightstoppers. These nickel-­plated lead pellets (20 percent of the payload) have a hemispheric ring that gives them an erratic flight. Designed to disperse, they give 3rd Degree a fairly wide pattern inside 20 yards.

Conclusion: They didn’t disperse as much as I would have expected. The 3rd Degree delivers a 40 percent tighter pattern at 15 yards than the Double X and a 15 percent more open pattern than Winchester’s long-range Long Beard XR. At 15 yards, I give the dispersal advantage to the Double X.

Long-Range Performance
The 3rd Degree’s second payload is Federal’s copper-plated No. 5 lead pellets. I have consistently taken turkeys out to 40 yards with this load, and I have every reason to believe that the 40 percent of the 3rd Degree payload made up of these pellets will crush gobblers at those middle distances—say, from 20 to 40 yards. But our test wasn’t in this happy middle ground. We also wanted to test the pattern at distance, in which the remaining 40 percent of the payload in 3rd Degree—No. 7 Heavyweight shot—should put enough pellets with killing energy in a gobbler’s vitals. To test this, I shot six loads each of 3rd Degree and Double X at 50 yards.

Conclusion
3rd Degree outperformed the Winchester load by 40 percent, placing an average of 10 pellets in the head and neck vitals compared to 6 pellets for the Double X. Interestingly, Winchester’s Long Beard XR load put only 12 pellets in the vitals at 50 yards, making it only marginally more lethal than the Federal load at that range.

It’s important to note the dispersion of pellets from all shotshells at 50 yards. I used a 3-by-4-foot backing board for this distance test and counted the total number of pellet strikes—not only those in the head and neck of the patterning target.

Every shotshell, including the Winchester Long Beard, sprayed the downrange area with pellets, leading to my conclusion that because these are not precision payloads at distance, hunters must take care not to inadvertently connect with bystanding turkeys. The 3rd Degree load printed an average of 220 pellets on the 12-square-foot target, compared to 198 pellets from the Double X. Long Beard delivered an average of 317 pellets at 50 yards. Snow counted an average of 173 pellets from 3rd Degree, compared to 171 from the Federal Mag-Shok load.