Shooting Hogs from a Helicopter: The Million-Dollar Pig

If you find yourself in a fair fight, then your tactics suck–so states one of the pillars of gunfighter wisdom.... 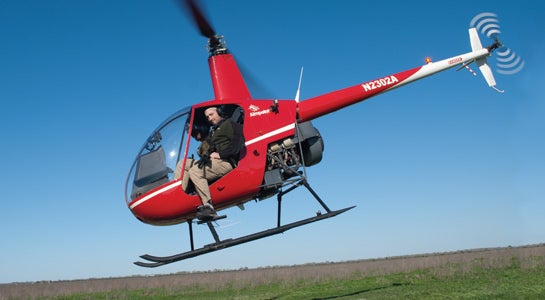 If you find yourself in a fair fight, then your tactics suck–so states one of the pillars of gunfighter wisdom. By that standard, my tactics on this pig hunt were pretty solid. In addition to the usual compliment of guns and ammo, I had some impressive tools at my disposal–a Robinson R22 helicopter and a modified military surplus Land Rover Defender bristling with thermal imagers, suppressed ARs, and assorted night-vision equipment. According to my calculations it was about $1,000,000 worth of equipment to tip the odds in my favor while I attempted to eradicate feral hogs from the Texas countryside.

Shooting pigs from a helicopter is a specialized, and expensive, method of hunting. And thanks to Texas’ so-called Pork Chopper Bill, it’s a sport that anyone–not just licensed eradicators–can try. Just keeping an R22 in the air costs about $500 per hour and the consequences if the shooter does something wrong–like putting a round through the blades during a banking turn or letting brass empties fly out of the canopy and into the tail rotor–can cause Really Bad Things to happen.

This is why I was grateful for the classroom time with Mike Morgan, a helicopter pilot and flight instructor turned hunting guide, who owns Vertex Tactical Aviation ­(helicopter​­hunting​safety.com), in Houston, Texas. The four-hour class is a mandatory prerequisite for taking to the air and covers both safety and shooting techniques.
**
How to Hit**
There’s nothing magical about the skills required to hit targets from the air, but they are counterintuitive–which becomes clear during the practice run Morgan has each shooter do before the actual hunt. Normally, a shooter’s instincts will cause him to lead a moving target or to hold on it if it is standing still. From a copter, both will result in a miss.

Even though the pigs will be moving at a dead run trying to get away, the shooter needs to aim behind and below–in other words lagging, not leading, the target–to hit. Since the helicopter is faster than the pig and closing the gap, you can picture the hog as an incoming, and not outgoing, target on a sporting clays course. It’s all about the target’s relative motion with respect to the shooter, and has nothing to do with its actual speed on the ground.

And, likewise, when you’re banking around a group of confused pigs in a field and your impulse is to shoot behind them since you’re moving so fast while they’re still, you have to counter that urge and hold right on them to hit. Because the pigs are at the center of the pivot the helicopter is making, the shooter and target are still with respect to each other and there’s no need for lead.

Costly Pork
I wish I could report that I shot a pile of pigs like my friend Adam did. He was the first of our group to take to the air, and he put down 18 hogs in a matter of minutes. But even with the unfair advantage the helicopter affords, this was still a hunt, and Morgan and I were unable to locate any pigs in the swampy thickets on the 20,000 acres we were flying over during our two hours–one each day–though I did send one coyote to predator heaven.

As darkness fell, we switched tactics and met up with the guys from Tactical Hog Control ­(tactical​hog​control.com), who run a gloriously over-the-top night hunting operation.
Their Land Rover Defender was as comfortable as it was lethal. A powerful thermal imager, salvaged from a tank and mounted on a joystick-controlled gimbal on the Defender’s hood, scanned for the heat signature of hogs feeding in the fields, while our helmet-mounted night-vision goggles allowed us to make a stealthy approach.

We finally located a lone hog in the open and I crept up on him with a suppressed .308. The pig never knew we were there and presented an easy target. No doubt the landowner was grateful to have another hog, which, in total, cause an estimated $52 million of agricultural damage per year in Texas, eliminated.

One million dollars in gear for one pig? That’s some expensive pork, and I’m glad I wasn’t footing the bill for the equipment. But the thrill of taking to the air during the day and owning the night after dark is a rush I’d recommend to any hunter.