10 Tips to Help You Shoot Like a Long-Range Sniper

Go long to shoot better in every scenario 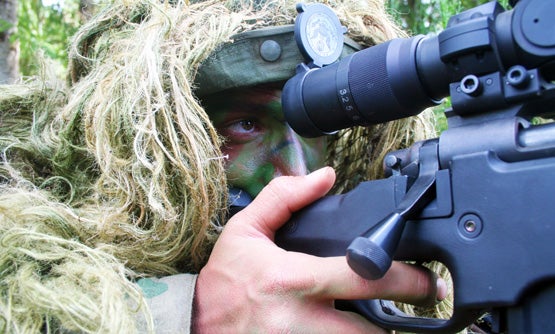 It’s not often that seasoned hunters would listen to a 26-year-old tell them how to shoot better. Heck, most of us kill whitetails with guns older than that. However, Staff Sergeant George Reinas is not just a young sniper for the U.S. Air Force. For the past five years he has been instructing our flyboy snipers on how to shoot better.

Before last week the farthest I had ever shot a rifle was 300 yards. I learned to shoot in a Wisconsin deer woods where shots outside of 100 yards were a rarity and I have only been hunting out West once.

So you can imagine my angst as I tried to locate a man-sized steel silhouette target 1,800 yards away through my rifle scope. It was day two of my sniper school course and I had just begun to get comfortable with the Desert Tactical .338 Lapua I had been issued. There were still plenty of flaws in my form, but given a solid rest I had a pretty easy time hitting targets out to 600 yards.

But this was different. 1,800 yards is more than a mile away. It was too far to see the target with the naked eye and even with a detailed range card I struggled to find the silver silhouette with my scope. This shot would be different than any other shot I had ever taken in my life.

Or would it? Admittedly, the instructor had already doped the scope for me after he took two shots at 1,800-yards (with the help of a spotter and a quick adjustment to the scope he center-punched the target with his second squeeze of the trigger). Theoretically all I had to do was center the crosshairs vertically, hold half a mil to the left to adjust for the wind (as suggested by my spotter) and not mess up the shot by slapping the trigger, flinching or having generally poor form.

As other shooters on the line took their turns one at a time sending rounds down range I thought about how in many shooting situations the circumstances (like wind and shooting position) are just as important as distance. For example, most people consider a 100-yard shot a piece of cake, but how about an off hand 100-yard shot at a moving target? Is a 300-yard shot in the field more impressive than a 500-yard shot from a bench at the rifle range?

Was a 1,800-yard shot from the prone position with a trained spotter in near perfect conditions that much more difficult than the quick off-hand shots I’d made on deer from a treestand swaying in the wind?

When it was my turn to shoot I went through my pre-shot checklist and settled in behind the gun. The target looked small in the crosshairs, but not impossibly small. At the bottom of my third breath I squeezed the trigger, absorbed the recoil and watched through the scope as the bullet sailed down range.

“Half a mil to the right … keep the same hold,” my spotter said as a small puff of dirt exploded next to the target. He didn’t sound surprised that I had missed, but I could tell that he was pulling for me so I jacked in another round.

Again I squeezed the trigger and watched for trace. “Ahhh! just missed to the right. Add a quarter mil to the left … you better shoot again before the wind changes” the spotter said sounding more optimistic.

I slid in one more round and got on the trigger. I moved the crosshairs ever so slightly to the left and squeezed.

It was by far the longest shot I had ever made in my life and it could very well be the longest shot I will ever take. I don’t see myself ever shooting at a game animal father than 400 yards away and there aren’t many shooting ranges along the East Coast that have a 1,800 yard target.

So even though I will probably never shoot that distance again, at least now I know I can (under the right conditions). ––Alex Robinson

Here’s what you can do to shoot more like Reinas and our military’s elite.

“The most important aspect of being on the range is not to shoot but to collect data on the rifle. We record data with every shot, so we know what our gun will do under every condition. We will then use this DOPE (Data Of Previous Engagements) book as a reference before every shot.”

“Snipers prefer to shoot dirty guns. In other words, we will not clean our rifles for 200 to 300 rounds. Leave that rifle dirty for the whole season!”

3. Squeeze on the Pause

“I like to shoot on the respiratory pause on the down breath. I take three deep breaths. Once I let all my air out on that last exhale, that 1- to 3-second pause is the money spot where I want to take my shot.”

5. Zero to a Higher Standard

“A lot of hunters settle for a gun that’s not quite zeroed. Snipers do not consider a gun zeroed until we get three consecutive rounds within a 1-inch square at 100 yards. Do not settle for less.”

“Our primary role on the battlefield is reconnaissance and intelligence gathering. In order to do this, we have to go to the extreme with camo. We use handmade ghillie suits that incorporate natural vegetation from the environments in which we operate.”

“Remember, wind is never constant. The most important wind consideration for a sniper is wind at two-thirds of the way to the target. There can be multiple wind directions and speeds between you and a target. You have to recognize these and make the right adjustments.”

“We use 175-grain Sierra MatchKings, where the average hunter is going to use some kind of ballistic-tip ammunition. These bullets aren’t as accurate, so you need to do some testing and find the best bullet for your firearm.”

9. Learn From the Kick

“If you are shooting a .308, or something of comparable recoil, the kick of the gun will tell you what you are doing wrong. Every time a sniper shoots, he wants the gun to come straight back into him. The scope should fall right back on target–that means your fundamentals are perfect.”

“There are two ways to take long shots. For quick engagements, we use a 500-yard zero and reference the reticle for the hold over or hold under. However, if I want to take a 1,000-yard shot and I have time, I’ll consult my dope and dial in my 1,000-yard range for a first-round hit.” ––James Hall