Genuinely original firearms are few and far between. Most new introductions rely heavily on proven design elements, and when gunmakers...

Genuinely original firearms are few and far between. Most new introductions rely heavily on proven design elements, and when gunmakers stray from these traditional concepts, the guns are often clunkers. Yet, someone at Merkel—or more likely a group of someones—did, in fact, create a remarkable new rifle in the form of the Helix, which is a bolt gun that operates unlike any other on the market.

Fast Action
The Helix is a straight-pull bolt-action rifle, meaning there’s no need to lift the bolt to run the action. Instead, a tug backward rotates the bolt head out of battery, and as the shooter continues to pull, the action opens, kicking the spent cartridge free. Pushing forward on the handle loads a new cartridge from the magazine, and the shooter is ready to fire in a flash.

What makes the Helix even faster to operate is the mechanical link between the bolt and the bolt handle. In order to cycle the bolt through its 4.25 inches of travel, the bolt handle only needs to move 2.5 inches. During my test, the bolt always traveled smoothly and evenly, never hanging up or giving me any problems. This feature makes the Helix the fastest manually operated bolt-action I’ve ever handled. Follow-up shots feel nearly instantaneous.

The profile of the stock complements the action. The radius on the grip, the flat combed stock, and the long narrow forend all make this rifle fast on the draw.

Take Down
The Helix not only shoots fast, but it also changes calibers quickly. My test sample came with barrels, bolt heads, and magazines for both .308 Win. and .223 Rem. Going from one caliber to the next takes less than a minute and requires no special tools. Pushing a button on the forend releases it so that it can be slid forward, exposing the lever that holds the barrel in place. Moving the lever 90 degrees frees the barrel. The barrel fits snuggly into the round recess in the receiver but wiggles out with minimal effort, even when the rifle is hot and dirty. Slide the new barrel into place—the bolt head is inserted into the barrel beforehand—throw the lever to tighten the works, clip the forend back on, and the rifle is ready to go.

Because this process is so easy, the Helix is a legitimate takedown rifle as well. The stock and action form the longest piece—just a hair over 27 inches long.

Performance
The Helix did well by every metric during my test, with the unfortunate exception of accuracy. Before I get to that, here’s the good stuff.

The detachable magazines, which release from the action with pinch tabs on either side of the receiver, are among the finest I’ve used. These single-stack units hold 3 rounds in .308-size calibers and 4 with the .223-size rounds. They load and unload smoothly and easily.

The trigger is crisp, but at 1 pound 12 ounces, it’s a few ounces light for a hunting rifle. I’d prefer to see it set to 2 pounds, especially if the rifle is to be used by someone who isn’t an experienced shooter.

The safety consists of a cocking lever mounted on the back of the receiver. Thumbing this lever forward cocks the rifle and sets it to “fire.” Like all the controls on the Helix, it is instinctive and quick.

The accuracy issues were a bit of a mystery to me. Both barrels are well made, based on the quality of the rifling I observed with my bore scope. And the forend system doesn’t torque on the barrel in any way, meaning the barrel is essentially free floating. Coupled with the excellent trigger and overall high level of craftsmanship, I’m at a loss to explain why the rifle didn’t shoot better.

These numbers aren’t terrible (they are quite average, in fact), but for a rifle that costs $3,295—and with extra barrels running $1,200, bolt heads costing $295, and magazines priced at $125—I expected better. 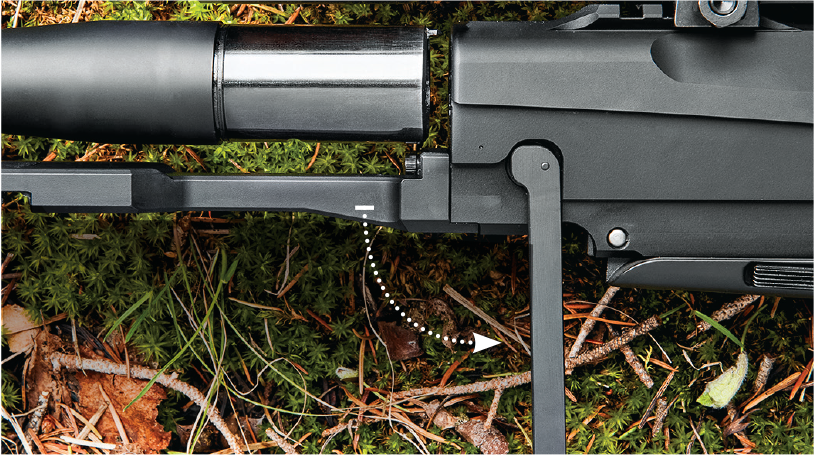 This detail shows the takedown mechanism on the Helix. With the lever rotated down, the barrel is free to slip out of the round recess in the receiver. The forend clips on to the metal bar below the barrel, which keeps pressure off the barrel.

The bolt head features a small claw extractor and plunger ejector. The stem at the back of the bolt head is where the firing pin, which is contained within the rifle action, slides into the unit. Different size bolt heads are required for different calibers.