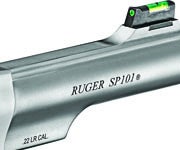 America’s outdoorsmen and women have a traditional fondness for compact, accurate rimfire handguns. Called trail guns, or kit guns, they’re easy to carry, inexpensive to feed, and fun to shoot. They also exemplify the term “multi-tasker.” Whether you’re harvesting small game for the camp larder, dispatching venomous snakes, removing pests, or just engaging in a casual plinking session, they do it all with ease. They remain a staple in the handgun marketplace, and in late 2011, Ruger added another trail gun to the mix.

The Ruger SP101 .22LR is built on Ruger’s compact, stainless-steel, double-action SP101 revolver frame. The barrel is 4.2 inches long (making it legal for sale in Canada) and features a green fiber-optic front sight that is fully encased to protect the fiber-optic rod from cleaning solvents. The rear sight is plain black and fully adjustable for windage and elevation.

The SP101 was originally built as a five-shot .357 Mag., but Ruger managed to fit eight recessed .22LR chambers into this cylinder.

The single-action trigger pull on my test gun measured 4.2 pounds and was as crisp as the proverbial glass rod. The double-action trigger pull exceeded the 12-pound limit on my digital trigger-pull gauge, but I didn’t feel it was significantly heavier than that. The overall length is 9.12 inches and the empty weight is 30 ounces. That’s compact enough for convenient carry, but with the heft and barrel length for accurate shooting. And the Ruger will shoot.

Though the double-action pull was heavy, it was smooth and staged beautifully. By bringing the trigger back to its distinct cylinder lock-up, the last segment of the pull was short and crisp. It was very easy to consistently “ring” my 8×10-inch hanging steel plate while shooting double-action at 30 yards. The lead splashes on the plate also indicated the rounds were grouping well.

I found out just how well when I set up a solid sandbag rest at 25 yards and fired full eight-round cylinder groups in the single-action mode. The best eight-round groups (Mini-Mag HP and Stinger) stayed around 2.5 inches. The other loads were 2.7 to 2.9 inches. With each load tested, the best four rounds of any group never exceeded 1.5 inches. Even the worst groups are “minute of cottontail” in anybody’s book, and no empty beverage can, pinecone, or other plinking target of opportunity would be safe. ($698)