The Top 10 Essential Cartridges for the American Shooter

Here’s a list of the 10 essential cartridges any true American hunter and shooter should have a firearm chambered for. 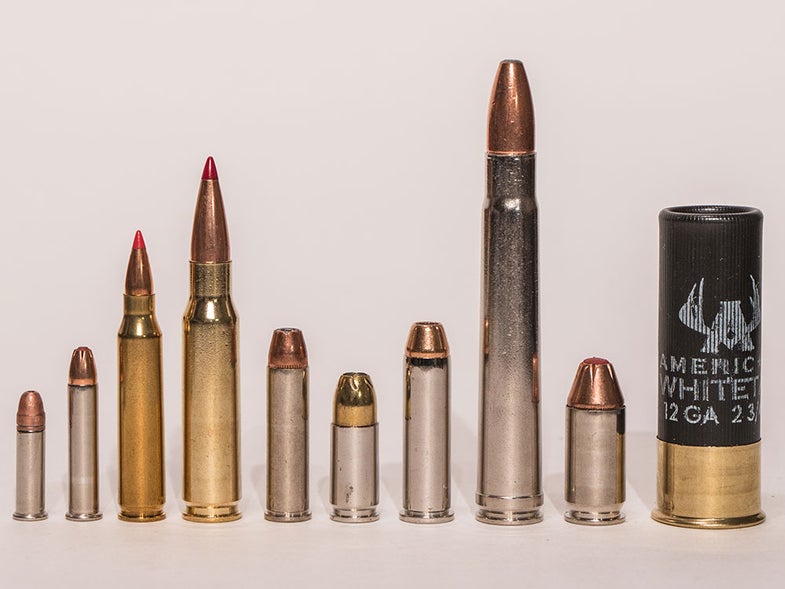 Fortunately we don’t live in a country where you can only own a couple firearms. Americans like to pontificate about the one-gun solution to everything, or the only cartridge you should have, if you could only have one. However, who wants to think in terms of one? That should only to apply to significant others and tax audits. When it comes to guns and cartridges, more is better. But, just so you don’t end up with more stuff you don’t need, here’s a list of the 10 essential cartridges any true American should have a firearm chambered for, listed in no a particular order.

1. 22 Long Rifle
It has been and will remain the most fun and useful cartridge of all time. In either a rifle or pistol, the 22 LR is ideal for teaching new shooters, for fun on the range, for small game hunting, and for throwing behind the truck seat just in case. It’s also the most affordable of all the cartridges to shoot and when you don’t have two nickels to rub together, that’s a big deal.

2. 22 Magnum
This rimfire magnum cannot compete with the 22 LR for affordability or fun, but it has a lot more punch. It will handle foxes and bobcats with ease and in a pinch can put down a coyote or pot a deer. Because 22 Magnum cartridges are so small and light, and because you can comfortably carry so many, as survival rifle it might be unrivaled. Every load imaginable is available for this rimfire including, shot shells, high velocity varmint loads, personal defense loads, and even FMJs.

3. .223 Remington
Most Americans could live out their life with a .223 Remington as their only centerfire rifle and never need anything else. It’s ideal for varmints and predators – including two legged – and it will handle deer and even bear, with premium bullets. It’s also the most prevalent chambering for the AR (America’s Rifle), which is ideal for all the things the .223 Remington is so perfectly suited for. Ammo is also reasonably affordable and readily available. Between the floorboard and console, every pickup truck in Wyoming probably contains a half-box of .223 ammunition.

4. .308 Winchester
There’s a reason Jeff Cooper selected the .308 Winchester cartridge for his conceptual, one-rifle-for-the-world Scout Rifle. It will handle beasties up to 1,000 pounds without shoulder slamming recoil. Ammunition can be found almost anywhere, to include gas stations and hardware stores. It can be had in a very light rifles, precision rifles, a semi-automatic rifles, single shot rifles, lever action rifles, and pump action rifles – if anyone still cares about pump action rifles. Because it is shorter, kicks less, and fits in more compact and lighter rifles, the .308 is the new .30-06.

5. .327 Federal Magnum
Though not as popular as it should be, the .327 Federal Magnum is a dandy and versatile cartridge. It’s also loaded to the highest pressure of any commercial handgun cartridge. This means its fast, hits hard, and is suitable for hog, deer, and bear sized critters. It will let the air out of an attacking felon and the fireball-like muzzle blast will sear their whiskers too. But, maybe the best part about a revolver in .327 Federal Mangum is that it will also fire .32 ACP, .32 Short, .32 Long, and .32 H&R Magnum ammunition. No other cartridge can compete with that versatility.

6. 9mm Luger
The most prevalent of all centerfire handgun cartridges, the 9mm Luger has been around since 1902. It’s also been chambered in the best fighting pistols made anywhere in the world. This includes the Browning HiPower and its new millennium rendition, the Glock 19. The 9mm Luger has the distinction of being used by more militaries than any other handgun cartridge and it comes in big guns, medium sized guns, small guns, and even itty-bitty guns. You can find ammo for it almost anywhere; even between your couch cushions. The 9mm is the undisputed ruler of the auto-pistol universe.

7. .357 Magnum
If there’s a king of handgun cartridges it’s the 357 Magnum. It was the darling of police agencies until they became convinced officers needed high capacity pistols, and until modern cops became cupcakes incapable of handling magnum recoil. Out of a handgun or a rifle a 357 Magnum is more than deer capable and will also fire less expensive, and lighter recoiling, 38 Special ammunition. Maybe the only thing worse than not owning a 357 Magnum is not owning a dog or never kissing a girl.

8. .375 H&H Magnum
The definition of a magnum is as convoluted as describing the average Donald Trump supporter. There’s no ballistic benchmark to be met before a cartridge can be called a magnum. However, a magnum cartridge should be capable of magnum work, like whacking African buffalo, elephant, or maybe a triceratops. The .375 H&H will put any critter walking this planet, and probably others, down for the count. The great professional hunter and gun writer Finn Aagaard said his .375 was the last rifle he would ever part with. It was, and that should tell you something.

9. .45 Auto
In the States, this totally American cartridge is considered ideal for fighting bad guys. It will forever be linked to what some also consider greatest pistol ever designed, the Colt 1911. Both served our soldiers in WW I and WW II, and a lot of soldiers wish it were still in uniform today. It can be had in duty and compact handguns, and it throws a big heavy bullet with enough velocity to make a hole going in, and a hole going out, of the nastiest, meanest, and most wicked bad guys you might encounter.

10. 12 Gauge
Because, just because. A 12-gauge shotgun can be a long arm of wickedness in a close quarters self defense situation. It can be a svelte extension of your body when gunning for upland game. It can be a bulldozer of power when loaded with slugs. And, it can be enough gun to be the only gun, you might ever really need. Available in almost any configuration you can think of, and sized for shooters of all descriptions, a 12-gauge shotgun is, and always will be, the best behind the kitchen door gun ever devised by man.