The Top 10 Six-Shooters of All Time

These revolvers are some of the first and finest in America 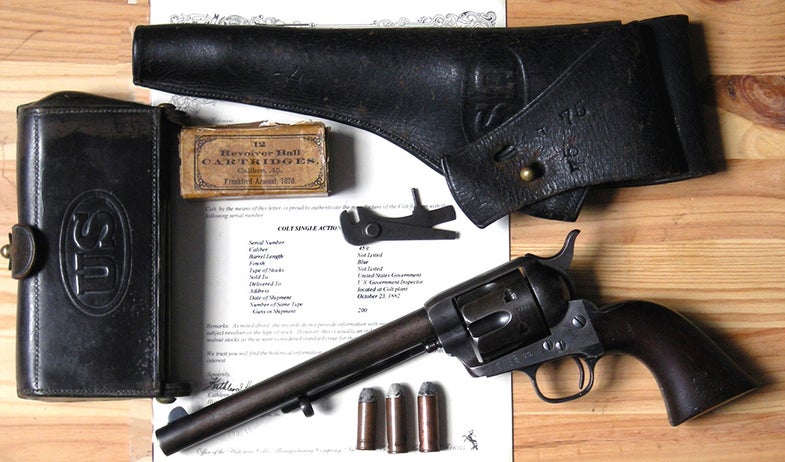 Long before semi-auto handguns stole the hearts of the brave, the blusterous, and the fearful, six-shooters reigned supreme as the finest sidearm available.

My first-ever handgun was a cap and ball 6-shot revolver. I never could hit much with it, but I sure learned a lot about six-shooters. I learned how to replace a broken mainspring or a worn cylinder-stop, how to build a holster, and how to tune an action. I figured out the seamless steps of busted-primer-ignites-powder-blasts-bullet-out-the-barrel, all in a soul-satisfying BANG of smoke and fire. I was in love, and cowboyed (real horseback, cow-poop-bespattered, chap-and-spur wearing cowboying, mind you—not the drug-store, wanna-be kind) my way through most of my teenage years with that old cap and ball sixgun on my hip.

Wyatt Earp, Bill Hickok, Porter Rockwell, and the Texas Rangers all carried them—just to name a few. Six shooters have stood by lawmen, homeowners, and ladies during countless encounters with unsavory individuals of our society. Here, in all their historic, smooth-actioned, deadly glory, are some of the first and finest.

A reproduction of an 1847 Colt Walker.

Designed by Captain Samuel Walker of the Texas Rangers in collaboration with Sam Colt, the single-action 1847 Walker Colt was engineered for fighting while on horseback, and saw action in the Spanish American War and with the early Texas Rangers. The massive six-shooters weighed around 4.5 pounds, boasted a nine-inch barrel, and were capable of being stoked with up to 6o grains of black powder under a .44 caliber round or conical projectile. They were considered lethal to 100 yards or more, and were touted to be the most powerful handgun in existence for 88 years, superseded by the .357 Magnum in 1935. Only 1,100 were made, many of which saw battle.

Civil War hostilities were thriving when the 1860 Army made its debut. Colt Paterson, Walker, and Dragoon pistols held the stage until the ergonomic and graceful—yet still powerful—1860 Army hit the battlefield. Thirteen years of production (1860 to 1873) saw more than 200,000 produced. Almost 130,000 were issued to soldiers during the conflict (and during the Indian wars that followed), making it the most-used single-action revolver of the Civil War.

Due to its graceful lines, many gun enthusiasts consider the 1860 Army to be the most beautiful revolver ever designed. Shooting a .44 caliber round or conical bullet seated atop 30 grains of black powder with a muzzle velocity of roughly 900 feet per second, the 1860 possessed enough authority to alter the intentions of many bad guys. Capable of being fitted with a shoulder stock, and sighted for approximately 75 to 100 yards, the 1860 Army six-shooter was—for it’s time—a capable companion during turbulent frontier times. 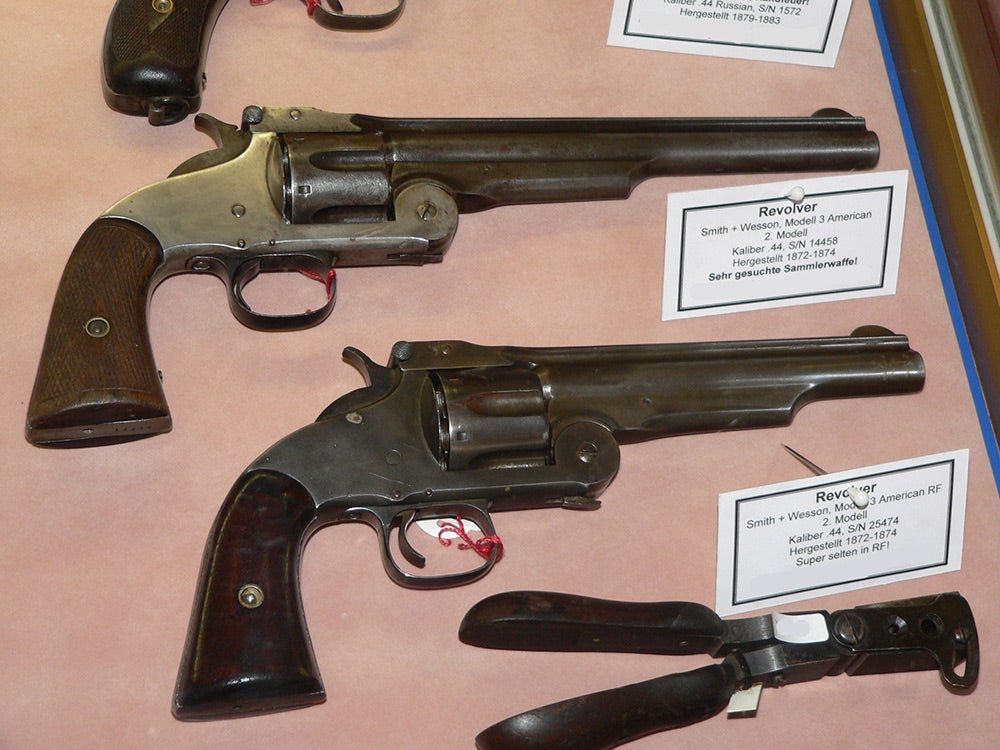 A Smith and Wesson Model 3

The S&W Models 1, 2, and 3, produced from 1870 to 1915 (also known as the “Schofield” and the “Russian” in slightly varying iterations) were the first six-shooters to reliably and successfully use metallic cartridges. A break-action pistol, it was considered by many to be faster to reload after firing than the Colt Peacemaker. Adopted by the US Army in 1870, the S&W revolver became the first-ever metallic-cartridge-firing handgun in history to be used by the military. Billy the Kid and other wild characters of the Old West were said to have preferred the Schofield, including Jesse James, who was killed by one, in the hands of his friend Bob Ford. Chambered in .45 Schofield as well as a handful of other rounds, the standard barrel length was seven inches. Many were shortened to five inches—most notably by Wells Fargo & Co. for use by their road agents. The revolver saw action in the Indian Wars, and rumor has it in the Spanish-American and the Philippine-American wars as well. Were it not for the advent of the Colt Peacemaker, the S&W Model 3 almost certainly would have been the most popular handgun of its day. 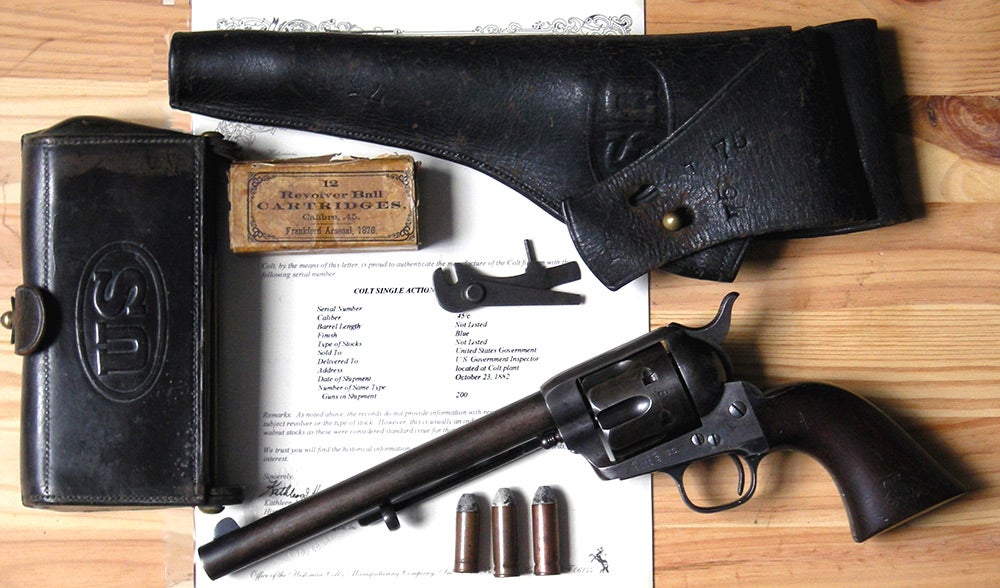 There is, really, only one six-shooter. It’s the one that won the West, the one that every cowboy wanted, the one that captured hearts all across America during the early days of the silver screen. Also known as the Single Action Army, the M1873, and the Colt .45, the Peacemaker was the most wildly successful metallic-cartridge-firing handgun of its day. Together with the Smith & Wesson Schofield, it superseded the 1860 Army. It served as the military’s service revolver from 1874 to 1892, and remains one of America’s favorite six-shooters to this day. The Peacemaker has been chambered in more than 30 calibers, offered in myriad different barrel, handle, finish, and metal configurations, over three different “generations.” If I had to choose only one six-shooter, it would be this one. 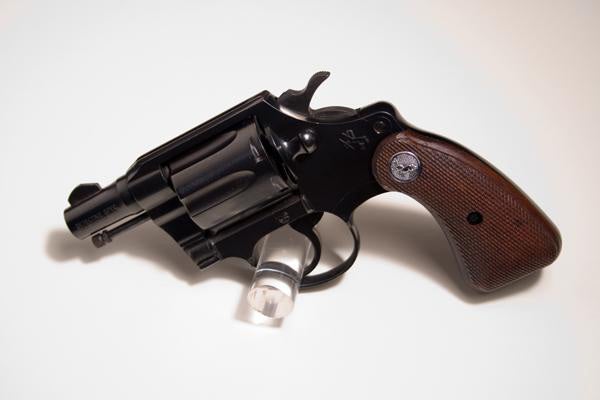 Any six-gun roundup would be incomplete without the inclusion of a snubby. The descendant of the Colt Police Positive (Colt’s highest produced revolver), this smooth little double-action snub-nosed six-gun saw plenty of action on the streets and in the pockets of gumshoes and gangsters alike. The Colt Detective Special was one of the first-ever short-barreled revolvers fitted with a swing-out cylinder, and was somewhat responsible for America’s 20th century fascination with snub-nosed revolvers.

Introduced in 1927 and living a long and popular life, the Detective Special was discontinued (along with the rest of Colt’s fine revolvers) in the mid ‘90s. Standard barrel length was two-inches, with blued steel and chrome – later replaced by stainless steel – models available. Caliber was usually .38 Special, with a few early models chambered in .22 LR (rare), .32 New Police, and .38 S&W. 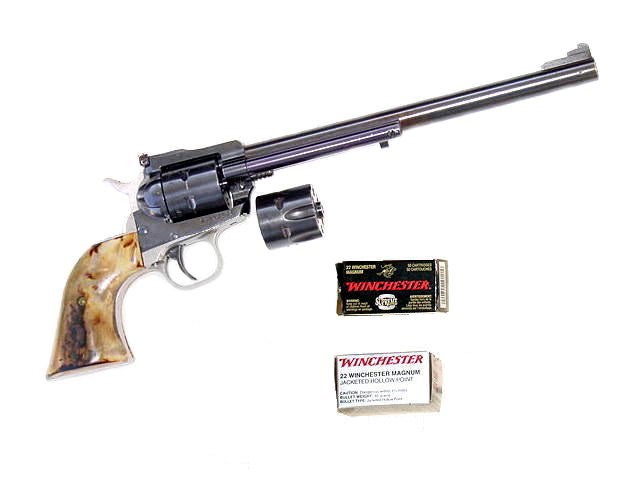 When I was 18, I decided it was time to learn to shoot a handgun accurately. I retired my old 1860, got my hands on a Ruger Single Six, and purchased 5,000 rounds of .22 Long Rifle ammunition. I fired 50 rounds a day, and 100 days later I could shoot a pistol accurately. That little single-action six-gun changed my shooting life. The Single Six model began life in 1953, morphed into the “New Model Single Six” in 1973, and is still produced in all its popular glory today. It’s been chambered in .22 LR, .22 WMR, .17 HMR, .32 H&R Magnum, and in barrel lengths from 4 5/8 the 9.5 inches, in blued and stainless models. Still going strong, the Ruger Single Six is America’s .22-caliber six-shooter. 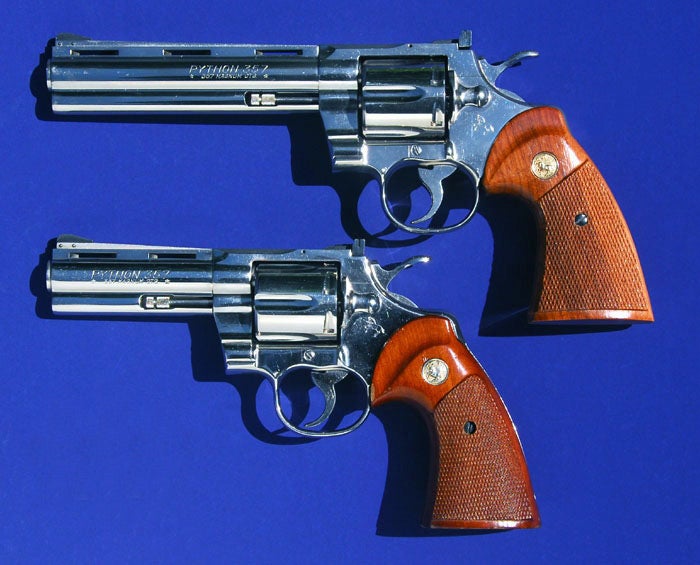 Colt Pythons with 6-inch and 4-inch barrels and nickel finishes.

Class. Panache. Style. Flair. Éclat. Shall I go on? The Colt Python, in the eyes of many revolver aficionados, epitomizes double-action perfection. Designed for the premier-revolver market during a day when the name Colt was synonymous with quality, Pythons are as comfortable in the company of Rolls Royce’s, Swiss watches, and stacks of 20-dollar gold pieces as they are on the field of battle.

Production began in 1955 and continued through 1999 (with a few custom-shop models produced till 2005). Finishes included nickel, stainless, and the deepest, most perfect blue. Barrel lengths from 2.5 to eight inches were available. Interestingly (to the best of my knowledge) Pythons were only chambered in .357 Magnum. I have fired a 6-inch model extensively, and I consider it to be the most accurate, intuitive, smoothest six-shooter I’ve ever had the pleasure of shooting. 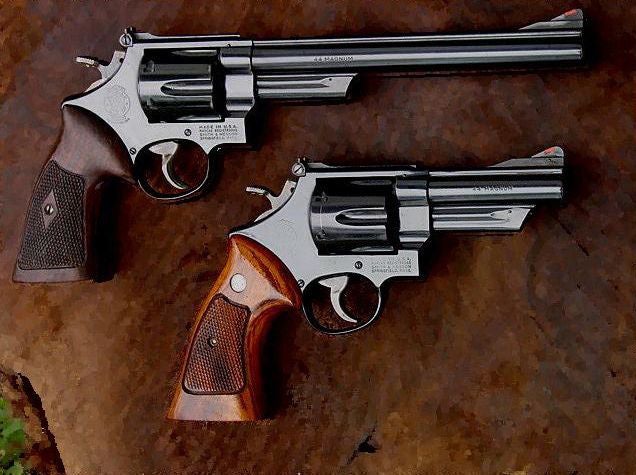 “Do ya feel lucky, Punk? Well, do ya?” Yup, this was the gun made more than famous by the 1971 Clint Eastwood movie “Dirty Harry”. The most powerful production double-action revolver of its day, this “N-Frame” six-shooter was manufactured from 1955 (with the “Model 29” moniker given in 1957) through the late 1990s, with significant updates, and then price-cutting modifications, made to later models. Barrel lengths ranged from 3-inches to 10 5/8 inches. The great Elmer Keith had a hand in the inspiration behind the big .44 Magnum cartridge the Model 29 was chambered in, originally intending it for big and/or dangerous game hunting. Though the Model 29 never—at least officially—entered service, it still deserves a place among America’s most notable six-shooters. 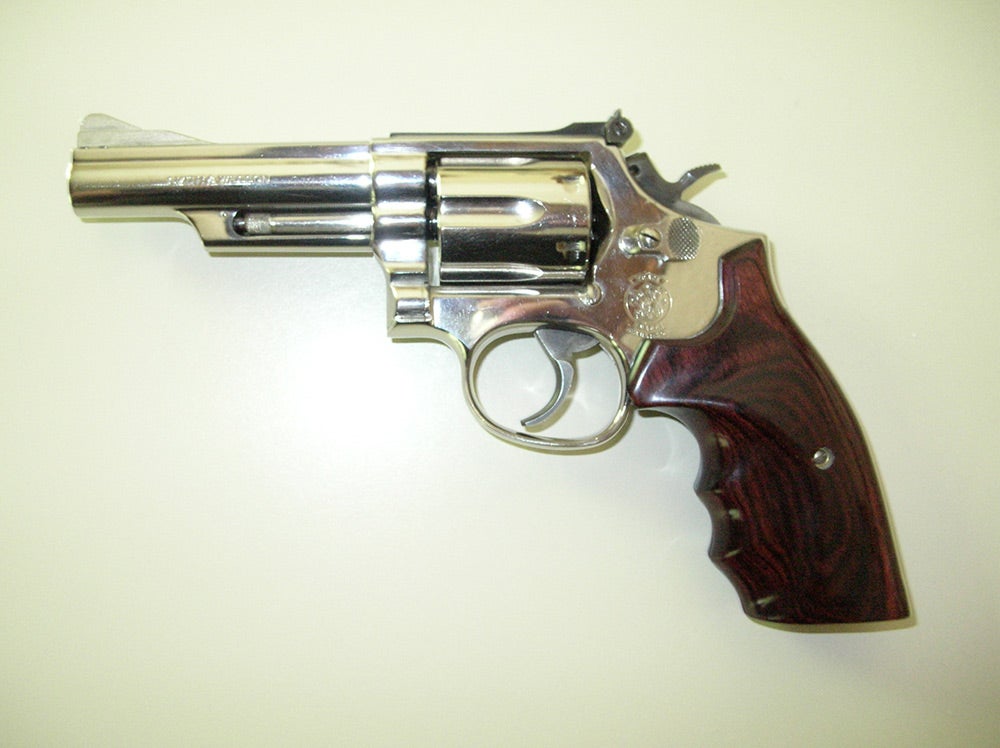 Legendary Border Patrol inspector, gunfighter, and writer Bill Jordan played a significant role in designing the Model 19. Chambered in the .357 Magnum, it was first designed in 1955 (a big year for six-gun development). Produced from 1957 through 1999 in barrel lengths from 2.5 to six inches, and with a number of hammer, trigger, butt, and finish options, the Model 19 (in 2.5 and 4-inch models) served as standard-issue revolvers for the US Immigration and Border-Patrol agencies until semi-auto handguns were adopted. I personally don’t have significant experience with the Model 19 (66), but anything designed by Bill Jordan is good enough for me.

Read Next: The Best Hunting Rifles in the West 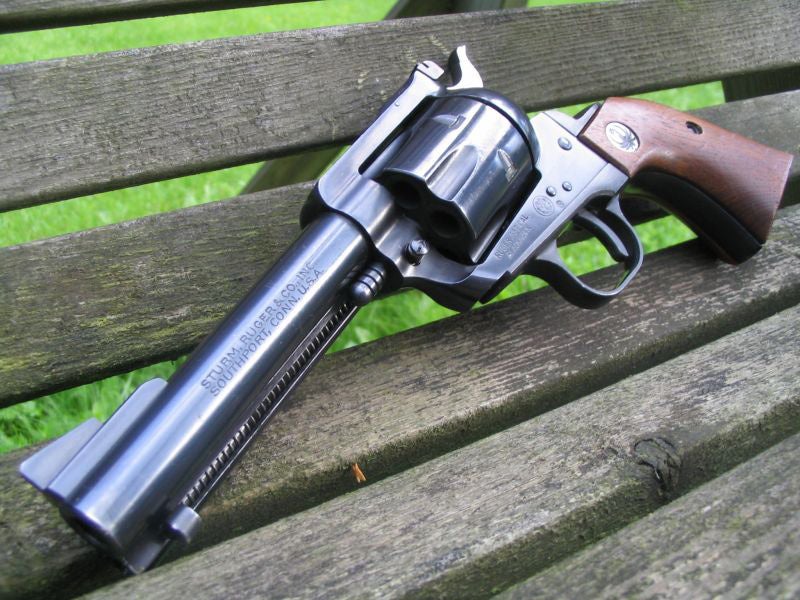 America was hungry for “cowboy” guns, and Colt had ceased production of its iconic Peacemaker. Then-new manufacturer Sturm, Ruger & Co. was quick to greet the demand with their little “Single Six” in 1953, followed by their “Blackhawk” chambered in .357 Mag. in 1955. Then they jumped on the .44 Mag., bandwagon in spry response to S&W’s introduction of that cartridge in 1956. Many updates and improvements were made over the decades, most notably the addition of a transfer-bar system in 1973. Capable of handling heavy pressures and max loads with aplomb, the Blackhawk is ideal for handgun hunters. It’s been offered in a surprising array of chambering’s including .30 Carbine, .41 Rem. Mag., 9mm, and more. Barrel lengths have ranged from 4 5.8 to 10.5 inches. Notable descendants include Ruger’s popular Vaquero—a classically shaped cowboy six-gun. In fact, I might stick my neck out and state that the Ruger Blackhawk—in all its variations—now claims the position of America’s cowboy six-gun.