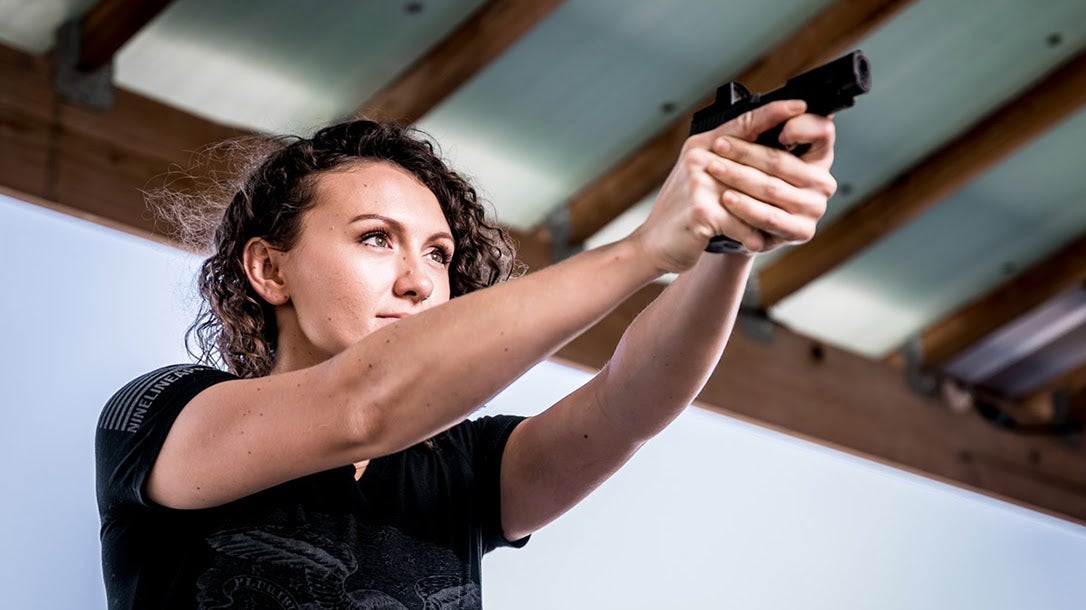 Mid-sized handguns destined for concealed carry are an ever-popular choice for many — so much so that finding a newly released handgun in stock is nearly impossible these days. The new guns are great, but in this market, your best bet might be seeking out a late model pistol. Here’s a rundown of the best semi-automatic handguns that can be easily found during the current boom in firearms.

We’re going to kick this off with the most obvious, and certainly the most popular choice, which is none other than the Glock 19. Glock is without question the first stop for many when the search begins for a self-defense pistol. They are relatively inexpensive, easily obtainable (in normal times) and are reliable as a hammer. The latest 5th generation Glocks include optic-ready slides, forward slide serrations, match-grade barrels, flared magazine wells, aggressive grip texture, and the best trigger the company has produced to date. But that doesn’t mean the previous four generations are irrelevant — far from it. The 3rd generation models are probably the most prevalent guns out there today, and the Glock 19 is the reigning champion as the most popular pistol in the world. These guys are out there in abundance, and even at inflated pricing, they are still quite a value. You also can’t swing a dead cat without toppling over displays full of aftermarket Glock sights, accessories, holsters, and other support equipment, which makes it easier to hit the street with everything you need to start carrying it immediately.

The P365 is the current pinnacle of micro-compact pistols. If you can find one — buy it — you won’t be dissatisfied. The P365 was envisioned as the only everyday-carry (EDC) pistol a person might need. The design objective was aimed at a demographic that would carry this pistol seven days a week and 365 days a year, hence the name “365.” SIG absolutely nailed it, producing a pistol that fights far above its weight class and is as close to a jack of all trades pistol that anyone has produced to date. It’s small enough to pocket carry but large enough to control comfortably. It’s incredibly accurate and easy to shoot while boasting a modular design capable of accepting magazines with capacities of 10, 12, and 15-rounds, all in a frame that’s a mere 1-inch wide. It’s not too big, nor is it too small, it’s just right. Due to the release of the XL, SAS, and optic-ready models, legacy P365 models are popping up on the secondary market as current owners trade up to the latest model. Take advantage of this opportunity and snap one up.

Smith & Wesson hit an instant grand slam with their Shield 9mm pistol. The Shield 2.0 and newly released Shield Plus are upgrades over the original with better factory triggers and a more aggressive grip texture. The Shield is a single-stack 9mm that has a sub-one-inch wide frame making it easy to conceal, while the great ergonomics make it quite easy to shoot. Up until the micro compact category of pistols was released a few short years ago, the Shield was arguably one of the best single-stack 9mm concealed carry pistols ever produced. The company has produced an incredible number of these guns, many of which have sold for about $250 over the last few years. If you can locate a used one for twice that cost, it would be a good buy. Up until this point, we have intentionally ignored the fact that the Shield is also offered is .40 S&W. In short, I wouldn’t take the gift of one of those noisy crickets, and you shouldn’t either. Stay clear of those hand cannons. Regardless of the “good deal” that you may come across, it’s simply not worth it.

You don’t hear much about Kahr Arms these days, but about 15 years ago, the company was a significant player in concealed carry pistols. Kahr was the pioneer of polymer-framed single-stack 9mm pistols before everyone thought they wanted one. These compacts served as reliable backup pistols for law enforcement officers and primaries for those undercover. Most Kahr pistols have long double-action triggers, with a nice smooth take up, making them a safe option but relatively easy to shoot without too much practice. The PM9 is certainly more desirable due to a smoother trigger and nicer machining; however, the CM models are a blue-collar carry pistol that will more than get the job done.

To say that Glock was a little late to the single-stack party by the time it released the Glock 43 is a bit of an understatement. That said, like most of Glock’s products, it’s better that they’re late than never produced at all. The G43 holds six rounds of 9mm in the magazine. Glock has moved onward and upward in the capacity game with their G26, leaving a trail of used G43s scattered throughout the lightly used display cases of brick and mortar shops across the nation. These guys are without question worth snapping up and will serve you well as a concealed carry companion, even if they are a little light in the magazine capacity department.

There were very good reasons 007 carried a Walther PPK. The PPK was without question the carry pistol that defined carry pistols for decades and could be found in the holsters of secret agents to normies, the world over. Compact, good looks, and smooth lines have solidified this pistol’s reputation in popular culture and as a reliable protector on the streets and established it early on as one of the world’s best semi-automatic handguns. Normally I’m not quick to recommend self-defense pistols in calibers smaller than 9mm, but in the case of the PPK, the .380 ACP is acceptable with the right modern load, given the pistol’s concealability and these abnormal times. While the PPK is now considered more of a classic, I wouldn’t hesitate to roll out the door with a PPK on my hip.

For all but the purists out there, the sun has almost set on the 1911’s reputation as a reliable concealed carry pistol. Technology has simply surpassed the 1911’s ability to remain relevant. This is, of course, compared with today’s best semi-automatic handguns that have raised the bar so high that the two World Wars champ just can’t reasonably compete any longer in price-point, reliability, and magazine capacity.

Now that I’ve kicked that hornet’s nest, hear me out. The 1911 is a fine pistol, has been mass-produced for the last 110 years, and is prevalent in today’s secondary market. Pricing has remained consistent for higher-end models from manufacturers such as Wilson Combat, and Nighthawk Custom, and mid-grade guns such as those from Springfield Armory, Ruger, Smith & Wesson and Kimber. 1911’s are the original slim-framed concealed carry pistols that are incredibly shootable, thanks to an ideal grip angle, fantastic ergonomics, and a tunable single-stage trigger. You also can’t argue with the effectiveness of the the .45 ACP as a defensive round. These guns aren’t Glocks, and are best suited for the experienced enthusiast because they require maintenance. You’ll need the ability to hand-fit replacement parts and the skills necessary to keep them reliably functioning. The 1911 commands mentioning in this list because it has served us well for so long.

In the 1980’s, Smith’s 6904 was a popular scaled-down duty pistol designed for law enforcement and civilians. The 6904 is an all-metal pistol featuring nice checkering on its front strap, while wrap-around grips provided the necessary traction to keep the smaller pistol securely in hand during fire. The mid-sized pistol features a short 3.5-inch barrel and comes with 12-round magazines with pinky extensions. While double-action pistols have mostly fallen out of style, the 6904 is still a viable option. To get used to the trigger, a good amount of dry fire practice should be considered mandatory for any new owner. With practice, you’ll be rewarded with a classic, high-quality pistol that can be counted on.

The CZ85 is a compact version of the supremely popular CZ75 pistol. This all-metal gun features good ergonomics and a very low bore-axis making it easy to shoot fast, and accurately. One of this semi-automatic handgun’s cool design features is slide rails that ride on the inside of the frame, significantly reducing the gun’s profile and further lowers its bore axis. Although long discontinued, just like Smith & Wesson’s 6904 above, this classic pistol can still be found on store shelves, mainly because people don’t know about this classic. If you’re looking for something a little retro yet still highly functional, you’d be hard-pressed to do better than this CZ.

Smith & Wesson SW99: One of the Best Buys in Used Semi-Automatic Handguns

Smith & Wesson went through a bit of an identity crisis in the late 1990s as Glock whisked away its long-standing domination of professional-grade semi-automatic handguns virtually overnight. In an attempt to redefine itself, Smith & Wesson collaborated with Walther to produce the SW99, a near replica of Walther’s polymer-framed, striker-fired P99. The SW99 was near identical to the P99 in almost every way, but seemingly struck each branch as it fell down the ugly tree. The P99 had svelte good looks, which made it worthy of being James Bond’s lethal companion in two feature films. Alas, the SW99 ugly duckling did little to save Smith & Wesson from Glock’s coup, it can be had for a song at the used gun desk, which certainly benefits those looking for an obtainable pistol that won’t break the bank and is probably one of the better buys out there today.

What is the most reliable semi-automatic pistol?

Glock polymer pistols have gone through and passed the most rigorous military and law enforcement testing, which is why they are issued to the FBI, Navy Seals, and 65 percent of federal, state and local agencies in the United States. They are considered the standard in reliable semi-automatic pistols, and you can’t go wrong buying a Glock 19, 17, or 45.

What is the best semi-automatic caliber handgun for personal protection?