Preseason Shooting Drills: 5 Tips for Rapid-Fire Practice at the Range

During the first couple weeks of this series we covered some basics by practicing our form and trigger control with... 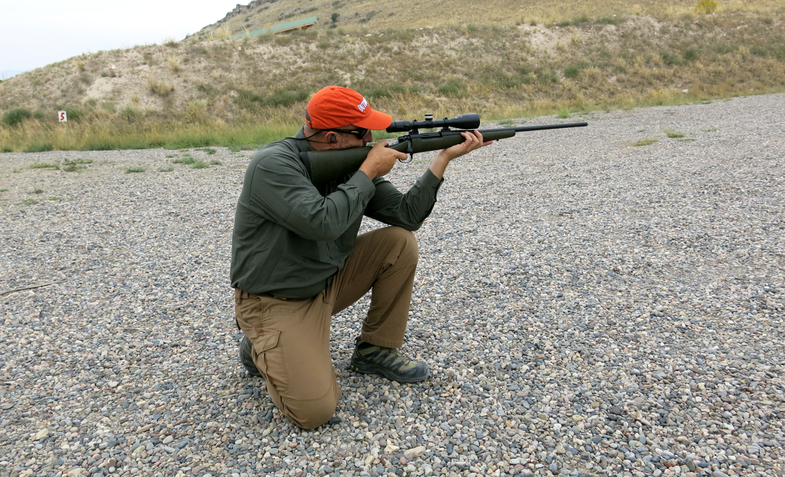 During the first couple weeks of this series we covered some basics by practicing our form and trigger control with some dry-fire exercises in week one, followed by correctly zeroing our rifle last week.

Now we’re ready to ramp things up at the gun range.

The rapid-fire drill is pretty straightforward. Using a target the size of a deer’s vital zone, the goal is to place a series of shots quickly and accurately on target from different shooting positions.

Load 3 to 5 rounds in your rifle (depending on its capacity and your ammo budget) and have a friend give you a “go” command while starting a timer.

The key to getting good speed on this drill is starting from a solid shooting position, which is why we focused so much on this in week one. If your natural point of aim is correct, your rifle’s sights should settle back on to the target after recoil, setting you up for the next shot.

Here are some other pointers to keep in mind:

1. Keep your head on the gun
One of the most common bad habits I see in shooters is the tendency to lift their head from the rifle’s stock after the shot to see what’s going on downrange. Of course, this is absurd since they were just looking through an optic or sight that gave them the best view of the target. If you do this, force yourself to keep your head down.

3. Dial back the magnification
For these drills (and for most hunting scenarios for that matter) you don’t need much magnification to get your shots on target. Try shooting these drills at 3X or 4X—or even less. The benefit is that you get a wider field of view so you can see what’s going on and you’ll be able to get back on target more quickly. The last thing you want while setting up a shot (or after taking one) is to struggle to locate the animal because you scope is cranked up to its max setting.

4. Keep breathing
One benefit to placing multiple shots in a row on target is that it will reveal flaws in the shooter’s form—and holding one’s breath is at the top of that list. You’ll usually become aware of this on the fourth or fifth shot as you struggle to keep your crosshairs on target and your eyes focused due to a lack of oxygen. Make a point to stay relaxed and breathe normally during the drill.

5. Increase the difficulty
There are a number of ways to make this drill more difficult. You can increase the distance from the target. Set a par time as a goal that you have to beat. Place multiple targets downrange that you have to engage in order. But perhaps the most useful way to take the drill to the next level is to start from the standing position with the rifle at port arms and the safety on. At the sound of the timer you need to get into your position and get the safety off before making the shot—just like you might need to do while hunting should you come across an animal by surprise.

Bonus Drill
After running the gun dry, pull out an extra round, load it and fire it at the target. Keep your spare ammo where it will be during your hunt and practice this motion until you get an extra round into your gun in a smooth and instinctive manner. That extra shot (especially if you shoot a magnum with a limited capacity) just might save your hunt.

Miss a week? We’ve got you covered: