Though bolt-actions dominate the hunting world, they are far from the only option for taking on big game. There are... 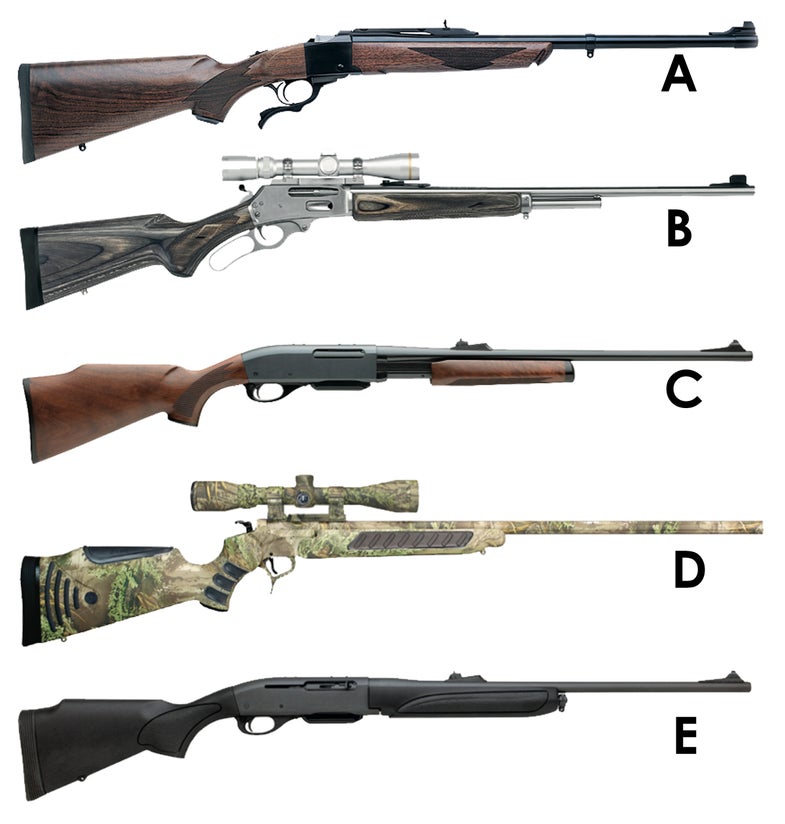 Though bolt-actions dominate the hunting world, they are far from the only option for taking on big game. There are numerous other types of actions to choose from, each with its own virtues.

1. TAKE ONE SHOT
For many hunters, the use of a single-shot rifle (A) is the measure of a marksman. Without an easy way to get a second shot quickly downrange, single-shots put a premium on accurate bullet placement. Falling-block rifles are an old design but are one of the strongest actions out there. A lever under the trigger is used to open and close the action; the empty shell is either kicked clear of the breech by an ejector or gently levered out of the chamber by an extractor.

2. GET LEVERAGE
A uniquely American rifle, the romance associated with lever-actions will forever be linked to their use in the Old West. But these aren’t just museum pieces: Lever guns (B) are still common in deer and elk camps across the country. They are light, handy, and pack a lot of firepower into a compact package. They’re ideal for handling in dense brush, carry easily in the scabbards on horseback, and, with some of the new lever-gun ammo available, are more accurate and flatter-shooting than ever.

3. GET PUMPED UP
Rifles that operate by manually racking the forend back and forth (C) have become increasingly rare in hunt camps. The best known of this fading breed is the Remington 7600, which for decades was a mainstay in the northeastern U.S., in areas where semiauto rifles were not allowed. Although the number of users of these rifles is small, the fan base is devout. Pump-action rifles are dependable and quick handling and come chambered in classic deer-hunting calibers like the .270 Win. and the .30/06.

4. BREAK IT DOWN
Break-action rifles (D) open in the middle like double-barreled shotguns and are loaded manually with one, two, or in the case of drillings, three or—rarely—more shells. Rifles of this type represent some of the least (and most) expensive rifles made. At the high end, bespoke double guns from British and continental European gun makers cost as much as a house. At the other end, gun makers like CVA and Thompson-Center make affordable break- actions, many of which can change calibers by swapping barrels.

5. GO SEMIAUTO
Ever since the introduction of the Remington Model 8 back in 1906, hunters have been using semiauto rifles (E) to take game. Most semis have gas-operated systems, where ports drilled into the barrel vent some of the gas expelled from the cartridge to a mechanism that harnesses that energy to cycle the action. They recoil more softly than other types of rifles and also offer quick follow-up shots since there is no need to manually work the action.