Shooting Tips: How to Cycle a Bolt Properly

If you muff the first shot at a game animal, you’ve probably lost your best chance to kill it. Still,... 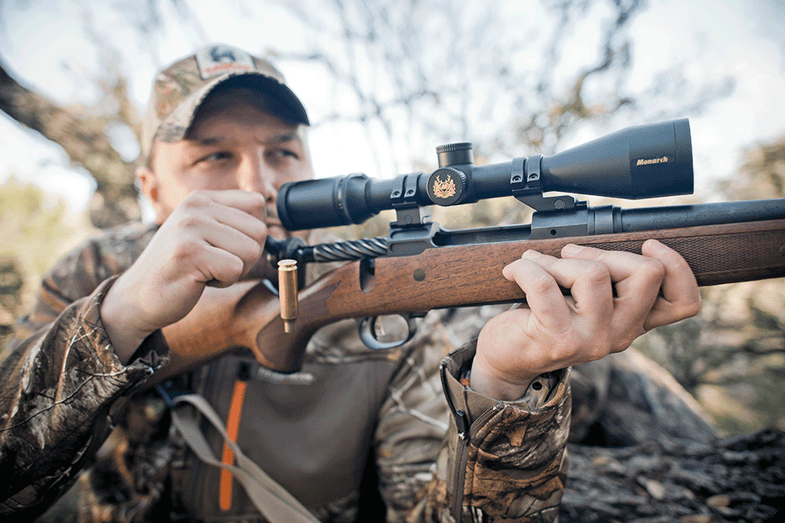 If you muff the first shot at a game animal, you’ve probably lost your best chance to kill it. Still, a follow-up shot can salvage your hunt, which is why it’s odd that few hunters practice cycling their bolt.

But just firing from a bench and plucking empty hulls from the extractor to slip back into the ammo box won’t help you much in the heat of the moment. Missed and crippled game can be gone in a blink. You must cycle quickly from actual hunting positions, with your cheek to the stock, when practicing follow-ups.

Urgency causes mistakes. That’s why piles of muzzleloading Springfields gathered from Civil War battlefields had multiple loads in the barrel. A buck dashing off poses no threat, but you’ll still feel the adrenaline. In those situations, your body will default to instinct—to its practiced routine.

Practice eliminates short stroking and double loading. It trains the eye and hand to keep the rifle on target. After performing drills with my first bolt rifle, I was able to deliver hits as quickly as a pal with his lever-action. To better my timed- and rapid-fire scores in National Match competitions, I took advice from top shooters who practiced bolt work. Here are some do’s and don’ts for hitch-free bolt operation.

DO…
Use the base of your little finger and the middle of the next finger(s) to lift the bolt. Retract with your hand cupped. Pull smoothly. Reverse at the stop with the base of your thumb on the bolt handle.

Hook your thumb over the knob and shove it forward and down in an arc (not “forward then down”). Be alert to feed failure. If the bolt misses the next round, you’ll feel a lack of resistance.

Start cycling during recoil. As the muzzle lifts, slide your bolt hand from the grip forward onto the bolt shank. After ejection, push the bolt and rifle toward the target.

Keep your cheek on the comb and your off hand firmly gripping the forend. Only severe recoil should pull you from your shooting position. Your torso will rock, and the bolt will travel The motion of the bolt should mirror that back-and-forward motion.

Practice from sitting, kneeling, prone, and off-hand positions. A fast, accurate follow-up shot hinges on a position that aligns the rifle naturally for the first shot and returns without effort as the bolt closes.
Cycle every cartridge you’ll take afield from the bottom of the magazine through the chamber before you hunt. This ensures all will feed without fault as you run the bolt from your shoulder.

DON’T…
Pinch the bolt knob between your finger and thumb. You’ll lose traction when your hand is wet or cold and during difficult extraction.
Think about the brass—spill it! Practice with dummy rounds, running the bolt as if you’ve just missed a huge buck and have an eye-blink to make a killing hit.