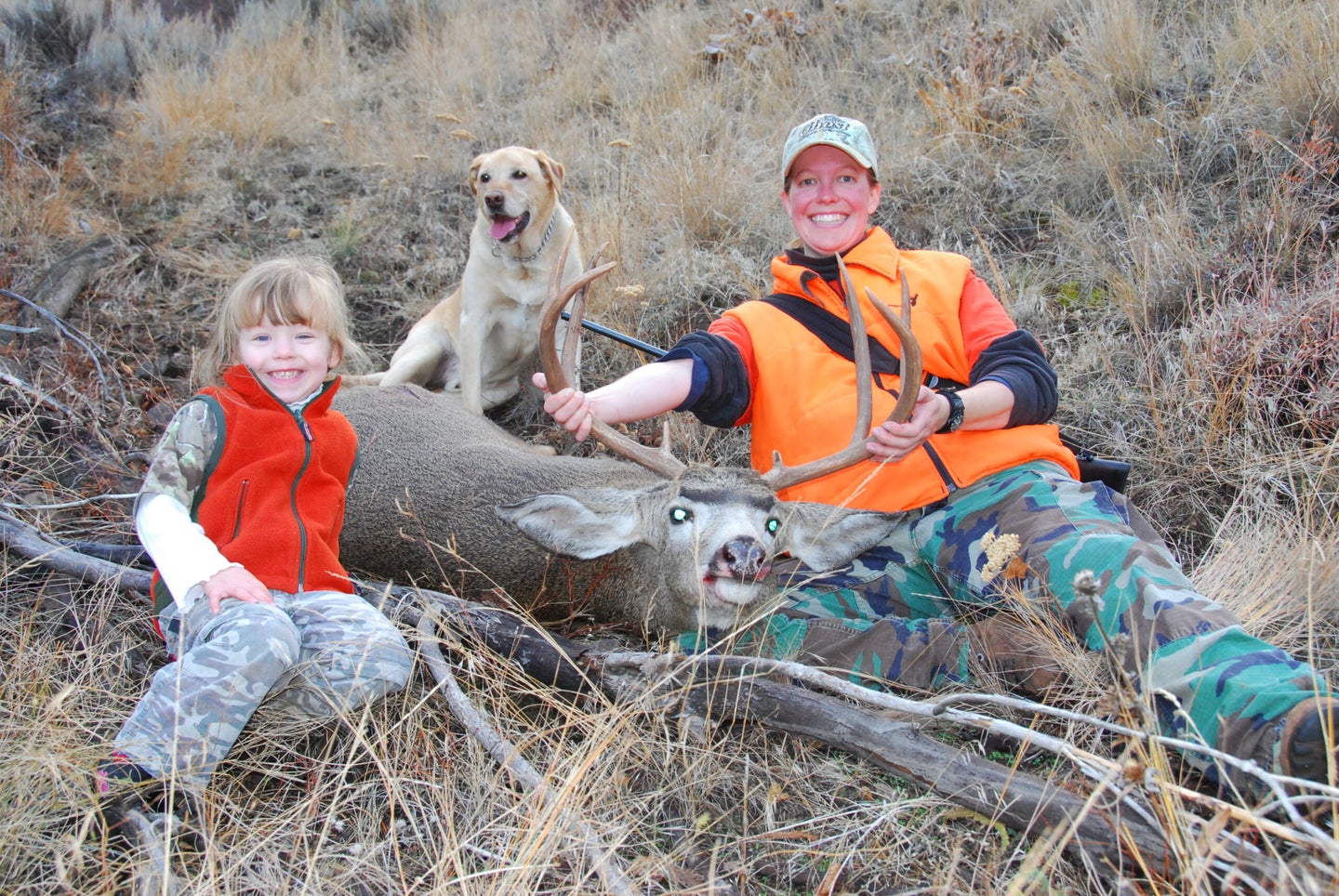 Check out the best hunting rifles for your next deer hunt

We’re not pulling any punches here. We’ve assembled a list of the best deer hunting rifles made today for every type of hunting, whether you’re chasing whitetails in a cedar swamp or scouting miles of open prairie for mule deer.

Yes, a basic synthetic-stocked .30/06 bolt gun will serve just fine for the majority of deer hunts, but there’s something to be said for having the right tool for the right job. Sometimes that means an extra-­accurate rifle for making long shots, or a lightweight rig for hauling up a mountain. And sometimes hunting regs won’t allow a centerfire rifle of any type. So for whatever type of deer hunting you do, you’ll find a perfect gun on this list.

With a heavy 26-inch barrel, the Sendero is built to squeeze as much velocity as possible out of flat-­shooting cartridges for long, accurate shots. The rifle is heavy—with a scope, it is going to weigh 10 pounds or more—but if you’ve got a short hike to your stand or don’t mind humping a beefy rig, the Sendero is ideal. The rigid HS Precision stock helps with accuracy. Currently it’s offered in 7mm Rem. Mag., .300 Win. Mag., and .300 Rem. Ultramag., though if you search for used guns, you might find one in the under-appreciated .264 Win.

Lever guns endure not from some misguided sense of nostalgia, but because they strike a balance between portability, balance, handling, and firepower like no other deer rifle. The “thuddy-thuddy” remains a top deer cartridge, but I’ve always gravitated to the .35 Rem., which packs greater oomph. Either way, however, you won’t go wrong. Topped with a low-magnification scope or a peep sight, the Marlin 336C is ideal for hunting dark timber or from within the confines of a small blind. With moderate recoil and a magazine capacity that most bolt guns can only dream of, it is a potent rifle.

The Sako Finnlight won Outdoor Life’s Editor’s Choice award a few years back due to its superb accuracy and reliability, which are not a given for rifles that have thin barrels and other weight-saving features. Light weight often comes at the expense of performance, but that’s not so with the 6-pound Finnlight.

I’ve shot this rifle until it’s hot enough to fry an egg on its fluted barrel, but it still manages tight groups. It comes in a wide range of great calibers—.260 Rem., .270 WSM, 6.5×55 SE, 7mm Rem. Mag., to name a few—but I think it would be hard to top the .308, given the cartridge’s mild recoil, proven killing power, and broad selection of accurate loads.

When it comes to the best all-around big-game bolt gun, the Weatherby Vanguard Series 2 is at the top of the list. These rifles hit a sweet spot for their price, accuracy, handling, and craftsmanship. One of my friends, an avid gun nut who is also a penny-pinching farmer, was so smitten after shooting my .308 that he bought four Vanguards, one for every member of his family. The refinements that Weatherby made with the introduction of the Series 2—a better trigger and stock, and a handy three-position safety—took what had been a good rifle to begin with and made it great.

Vanguards come in a host of configurations and calibers, but if you’re looking for a no-nonsense working gun for any type of deer, go for the Stainless Synthetic. It will handle rough use and rough weather, and with Weatherby’s accuracy guarantee, you can count on the rifle to do its part to guide your shot to its mark.

I've shot at least a half dozen different Ruger Americans since they first came out, and all of them are absurdly accurate and sell for a price that gives other gunmakers fits. For a street price of about 400 bucks, Ruger has built a rifle with a good barrel and an innovative bedding system. It also comes with an adjustable trigger and a three-lug action that runs smoothly from the shoulder, which is something that many semi-custom bolt guns don't do. The rifle comes with Weaver-style scope bases, making it an even better value.

About the only knock on the rifle, I suppose, are its aesthetics—though that seems a little ungenerous given the value it otherwise represents. The stock feels a bit flimsy in hand, and the rifle isn’t one that a hunter is likely to mount above the mantlepiece for its looks. Maybe this is a good thing, however. If Ruger managed to make the American a thing of beauty on top of its other virtues, other gunmakers would probably just give up in frustration.

Hunters on small parcels of private ground need a rifle with the ability to put an animal down quickly. This is a scenario where a large-caliber AR shines. A deer that makes it to land where the hunter doesn’t have permission to search can be a nightmare to recover.

The Ambush 300 Blackout is well suited for this kind of work. Most hunters will probably opt for the supersonic .30-caliber loads that launch bullets weighing around 115 to 125 grains at 2,200 fps or more. For shots out to 200 yards, these rounds are deadly, and given the moderate recoil and semi-automatic operation of the Ambush, fast follow-up shots are possible if needed.

The Ambush comes with a threaded 16-inch barrel, so attaching a sound suppressor to lessen the muzzle blast is easy to do, should the hunter want to save his hearing and be less of a nuisance to whoever might live nearby.

These rifles are as basic as they get. And basic is what one wants when putting a deer gun into the hands of a young or inexperienced hunter. The way the H&R Handi Rifle operates couldn’t be simpler. The small lever on the back of the receiver unlocks the action, which pivots open on a hinge. When the shooter is ready to hunt, he drops a round in the pipe and closes the gun, and away he goes. Prior to the shot, the hunter cocks the hammer and that’s it. There’s nothing complicated to remember or to mess up.

The exposed hammer makes it easy to check the status of the loaded gun, which is a good thing. These rifles also have pretty good triggers and are accurate as well. And there’s something to be said for a ­single-shot, which places emphasis on accuracy and marksmanship whenever the trigger is pulled.

This platform is offered in many calibers, including the .44 Magnum, .223 Rem., and .243 Win., all of which are good deer rounds that don’t have excessive recoil, making them smart options for young hunters.

My high opinion of these bolt-action slug guns was cemented the day I used one to help a blind hunter kill hogs in Texas while looking over his shoulder through a special scope mounted high above the barrel. Communicating in whispers, the two of us were able to knock over multiple pigs. Like everything Savage makes, these guns are accurate and, in the case of the M220, come equipped with Savage’s Accu-­Trigger.

That this gun is chambered in 20-gauge is another reason to love it. These slugs are much softer shooting than 12-gauge slugs, and no deer you might shoot would end up any less dead. The rifles have a detachable box magazine that holds two rounds and comes in a couple of different grades, either plain black with a synthetic stock or with stainless and camo finish, which costs a bit more.

I'll confess that it is a bit difficult to pick a "best" muzzleloader out there because, frankly, there are a number of excellent ones on the market. The Pro Hunter FX from T/C gets the nod, however. These rifles are well made, easy to clean and shoot, have comfortable stocks and good ergonomics, and also have a proven track record, which makes them a solid option for blackpowder hunting.

For areas that don’t allow optics, the open sights on the Pro Hunter do their job well. The recoil-dampening system, which is built into the stock and consists of a series of squishy strips that compress under recoil, is also quite effective. While I don’t usually care for guns with finger grooves molded into the stock, the ones on the Pro Hunter are comfortable and help align the shooting hand for a good trigger squeeze. The Pro Hunter FX comes with a 26-inch barrel, a breech plug that is easy to remove by hand, and a crisp trigger.

The 26 Nosler is the new kid in town and has hunters who stalk medium-size game in big country all aflutter with its barrel-smoking ballistics. Nosler’s initial loads in this 6.5mm caliber are a 129-grain AccuBond Longrange at 3,400 fps and a 140-grain AccuBond at 3,300 fps. For a hard-hitting and effective long-range hunting round, it is difficult to do better.

But the ballistics and ammunition are only part of the story. The M48 Patriot, which is the rifle Nosler is making for the new round, is an outstanding bolt gun. Every component on the rifle is top-notch, and it is easy to tell that the craftsmen who designed and built the M48s are hunters and shooters. The triggers are lovely, the barrels are accurate, the stocks are well proportioned and strong and stiff, and the action is one of the finest hunting actions made.