In the era of synthetic stocks and carbon barrels, there’s still a place for beautiful, traditional-looking rifles in deer camp 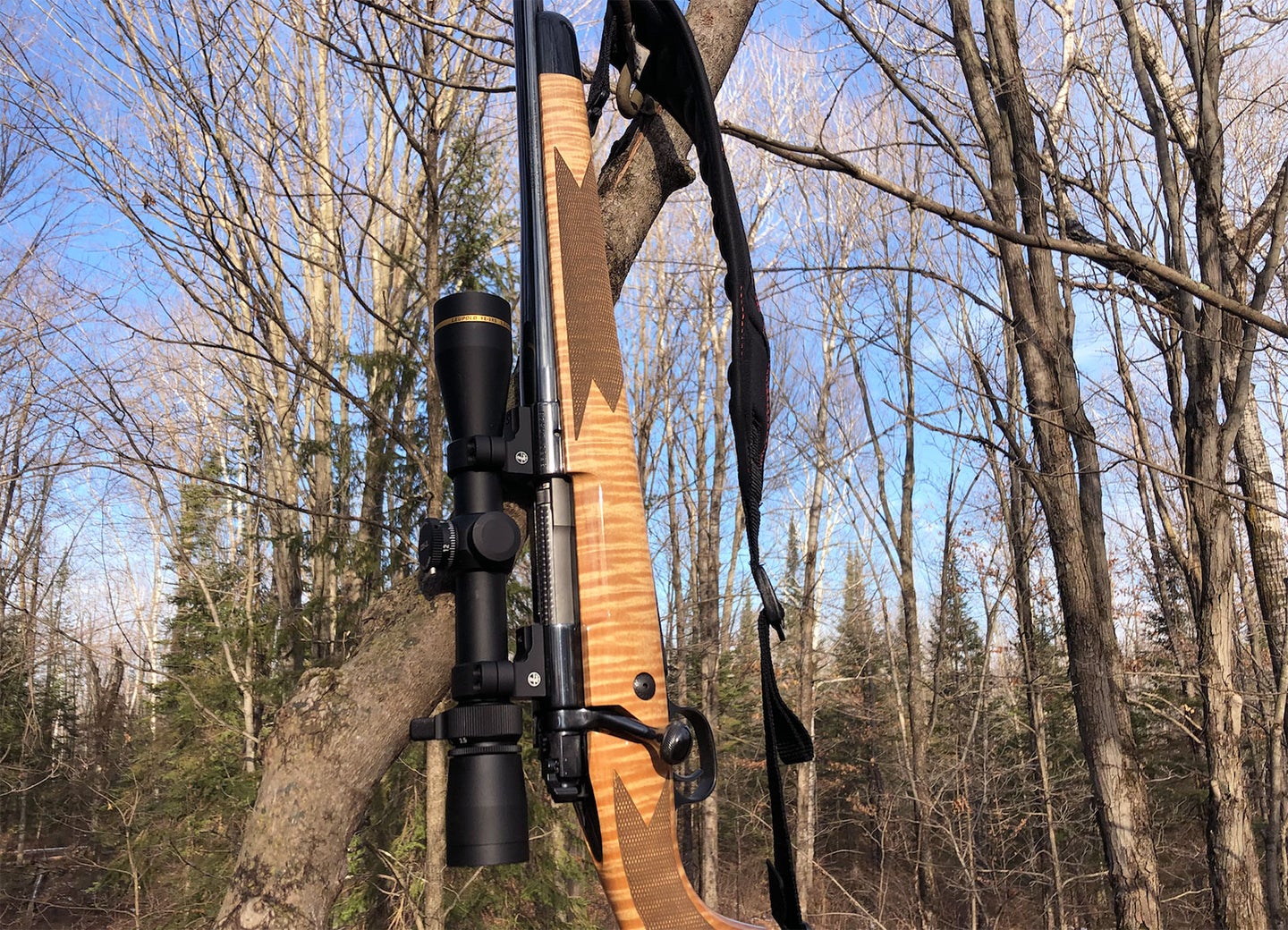 Let’s get this part out of the way first: I am not a Fudd. I own lots of rifles and shotguns with synthetic stocks, I’ve shot smart scopes, and I’ve hunted with AR-style rifles. Plus, I’m a Millennial, at least as defined by age. I know that new shooting technology is useful and has its place. But I think that those traditional, wood-stocked bolt-action rifles have their place, too.

In my opinion, that place is deer camp where tradition thrives. The gold standard here would be hunting with Grandpa’s old gun (perhaps a Savage 99 or Marlin 336), but maybe you didn’t grow up in a deer hunting family, or maybe Grandpa is still hunting with his rifle. Sure, you could shop around for an old, used gun (maybe a classic Remington 700 or a Winchester Model 70), but the nicks and scratches in that rifle won’t be yours. I think there’s still value in buying a new, wood-stocked rifle, marking it with your own memories, and then one day passing it down.

The good news is there are still plenty of quality rifles being made with wood stocks. This fall, I spent my deer season hunting with a new Winchester Model 70 Super Grade rifle that’s fitted with a beautiful maple stock. And, I plan to hunt with this gun for many deer seasons to come.

My 8-pound Model 70 in .30-06 is not the highest performance rifle out there. You’re not going to want to carry it into the mountains on a sheep hunt and you’re certainly not going to win a PRS match with it. But realistically, I don’t need much performance out of a deer rifle. In 22 years of deer hunting Wisconsin’s Northwoods, I’ve never needed to make a shot farther than 200 yards.

Most of my shots are made in the woods at close ranges. Anyone who has hunted the hectic 9-day Wisconsin gun season knows that shots at bucks are usually quick ones, taken while the deer is moving through timber. My shooting is done from a treestand, usually offhand, or braced against a tree. For this kind of work I want a rifle that comes to my shoulder quickly, points naturally, and runs smoothly. The Winchester Super Grade and many other modern wood stocked rifles are built to do just that.

As for accuracy, any rifle that shoots around 2-inch groups from the bench, with hunting ammo, will suffice. That might sound like heresy in the era of sub-MOA guarantees, but it’s a realistic perspective. On any given shot in the Wisconsin deer woods, I’m essentially trying to hit an 8-inch oval that overlaps a buck’s front shoulder at ranges of 50 to 200 yards. I do not need sub-MOA accuracy out of my rifle and load to do this.

Beyond performance requirements, I want the rifle to look like the rifles of my childhood. That means a nice wood stock. I can remember back to when I was a little kid, my dad first showed me his deer rifle—a beautiful Browning A-Bolt Medallion that my mom had given him as a wedding gift—and instructed me on how to handle the gun safely and avoid touching the metal on the barrel or the lenses on the scope with my grimy hands. Even as a little kid I could tell that the rifle was imminently important, even if I wasn’t sure why. My dad loves that gun, and he still hunts with it today.

For Wisconsin deer camp, I want to hunt with a rifle that brings back that kind of reverence.

There are, of course, good reasons as to why hunters and shooters have moved toward synthetic stocks. They are typically more durable, lighter, more consistent, and often more affordable.

“Wood is an organic material that reacts to its environment,” says Shooting Editor John B. Snow, who has seen the dramatic shift toward synthetic stocks during his long tenure at Outdoor Life. “And wood is also, well, squishy, which is an issue. There are ways to mitigate it and try to seal wood against the environment. Done right, you can pretty much do the job. But if you’re talking about a basic wood-stocked rifle, it’s going to be environmentally susceptible compared to a well-made synthetic stock.”

Since synthetic-stocked rifles started cropping up decades ago, they’ve taken over the rifle market and now the most precise custom rifles—and, on the flip side, many of the cheapest hunting rifles—come with synthetic stocks.

“When I was getting going at Outdoor Life, a synthetic-stocked rifle was looked at like a turd in a punch bowl,” Snow says. “The feeling was, why would you want that ugly thing. But it’s shifted to the point where you can hardly find a custom gun maker who makes a wood-stocked rifle anymore.

“What drove the trend was performance. When gunmakers like Kenny Jarret or Ed Brown started making good synthetic rifles, accuracy was part of their promise. Then you’ve got the Gunwerks and George Gardners of the world, they never even considered wood.”

“Look at Melvin Forbes. His synthetic stocks are a work of art. They weigh just mere ounces and they’re just strong as hell. I’ve written before that you could beat a cape buffalo to death with one and it wouldn’t break.”

But a wood-stocked rifle isn’t inherently less accurate than its synthetic counterpart out of the box, that’s a total fallacy. The difference is that wood is more susceptible to warping over time, which can impact accuracy. So, if gunmakers are shooting for supreme, consistent accuracy, they gravitate to synthetic stocks with very few exceptions. Often, there are other factors about wood-stocked rifles that contribute to accuracy, as well.

“Those wood guns tend to have sporter weights and lighter barrels, so there are other things tipping the scales against them in the accuracy realm. But for the person who buys that gun, ultimate accuracy is not their priority.”

None of Snow’s commentary on wood-stocked rifles really concern me. Except for maybe one: They aren’t made like they used to be.

“The one thing I would lament is the loss of hand-craftsmanship in modern wood-stocked rifles with hand checkering and so forth,” Snow says. “That’s a dying, or even dead, art. And that’s part of the evolution, you can see that in a lot of places. Just look at any old Model 70 or Mauser. Look closely at the metal and you can see the chatter from hand filing marks and know that this rifle was honed and tuned by somebody, rather than just cut perfectly by a machine. And that goes back to the idea that the gun is a living, breathing object. I don’t know that today’s wood guns have that same mystery to them. They might be wood, and they arguably have more soul than the synthetic guns, but it’s not like the first Marlin I got, which clearly shows handwork on it.”

I’ll admit that the fact these rifles aren’t made with the same hand touches diminishes their appeal, but only slightly. There’s still plenty of care that goes in to making the best wood-stocked rifles today.

The Winchester Model 70 Super Grade I hunted with this fall is, by all accounts, gorgeous. The AAAA grade stock is red maple (though some sugar maples make the grade, too) from the Appalachian Mountains. Each log is inspected and purchased individually by Tech Woods USA, according to Winchester product manager Glenn Hatt. The stock blank is heat treated, graded, certified, and then sent to the Winchester factory in Portugal where they machine, checker, finish, and then bed the stocks onto the rifles.

“The heat treatment of the maple stocks also changes the color of the stocks so they aren’t so much a white-blonde but have a more of a yellow, antique look that really lets the flame or tiger striping pop, especially with our gloss finish,” Hatt says. “The added rigidity, stiffness, and resistance to moisture variations are also extreme benefits. After Tech Woods USA hand selects each tree, we hand select each blank and mark it … This ensures that it meets our tight criteria for ambrosia (dark worm lines in the stock), knots, and any other blemishes and guarantees that the stock meets our quality standards.”

Maybe next year I’ll add another one of these modern wood-stocked rifles to our deer camp gun rack. Our antlerless deer season runs late into December now, and there are plenty more memories to be made.