This spring I’m lucky enough to be chasing a Grand Slam (four subspecies of turkeys in the U.S. including Eastern,... 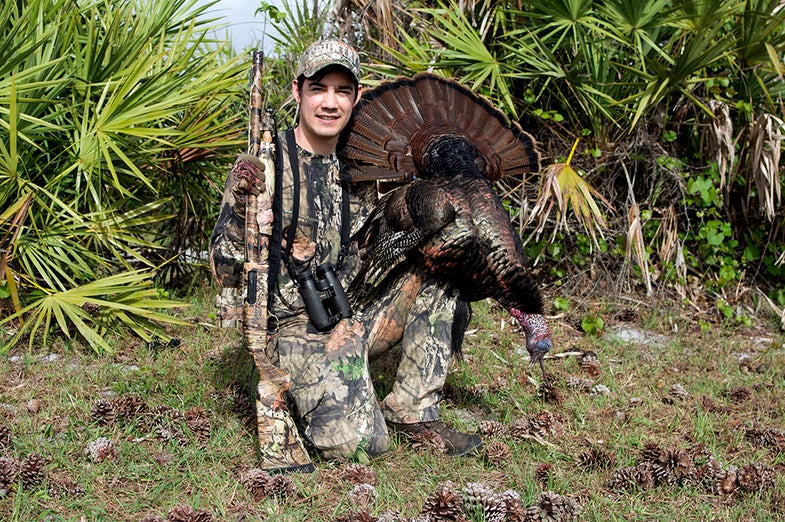 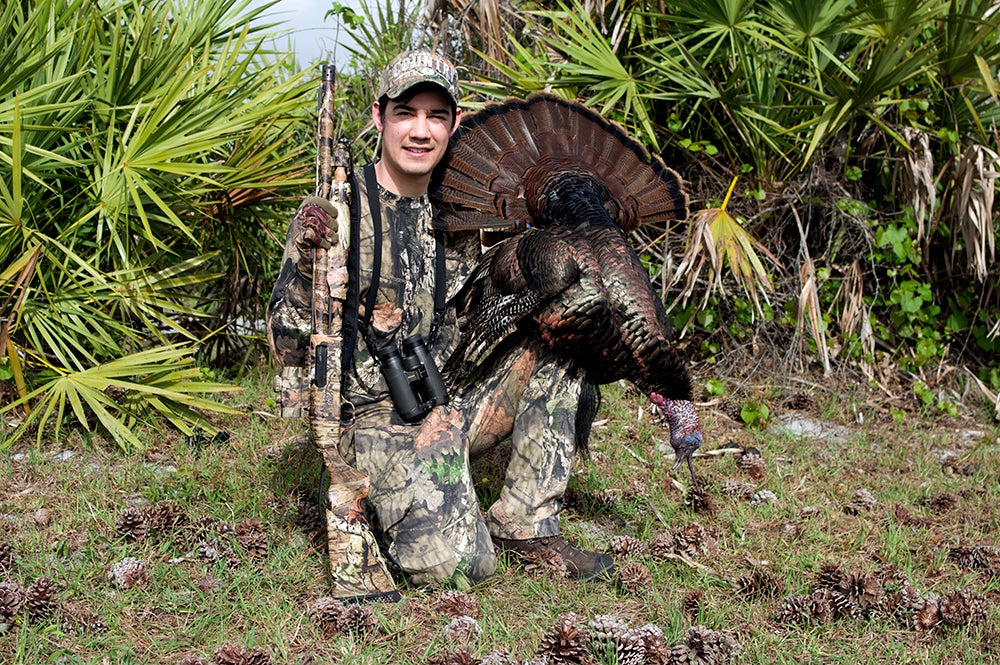 This spring I’m lucky enough to be chasing a Grand Slam (four subspecies of turkeys in the U.S. including Eastern, Rio Grande, Merriam’s and Osceola), and my first stop was south Florida to hunt Osceolas with guide Wayne Shelby and Matt Morrett of Zink Calls. These guys have decades of experience when it comes to chasing swamp turkeys and on the first morning of the hunt, Morrett coaxed in a lone gobbler to about 25 yards and…boom! The first leg of my Grand Slam season was complete.

The next morning, my hunting buddy Jeff Johnston tagged out when two strutters charged into our spread to beat up on a jake decoy. The hunt went so smoothly because we were hunting a property that was covered up in birds, but also because Shelby and Morrett had a solid game plan and they stuck to it. Here’s what I learned from them.

1) Pattern birds in open country
The area of Florida that we were hunting was a mix of open pastures, orange groves, and palmetto thickets. The terrain made it fairly easy to find where the birds were roosting, but you need to do more than locate the roost. Glass the birds during the day from a distance (if you stay in the truck, they’re less likely to spook) and figure out where they want to go after they fly down. Your time in the afternoons is better spent scouting than hunting. If you pressure birds in the afternoon, there’s a good chance you’ll blow the roost. Pattern a gobbler in the evening and kill him in the morning.

2) Build a blind
I like running and gunning for turkeys as much as anyone, but patience is the name of the game in Florida. This is because Osceolas typically gobble less than other turkey subspecies once they fly down. If you’re trying to run-and-gun, there’s a good chance the longbeards will go quiet before you get into position. So, once you’ve got birds patterned, build a comfortable blind (in the afternoon) between the roost and the spot where you expect the turkeys to go feed. If possible, set up so the morning sun rises at your back. Bring chairs that sit low to the ground, a ThermaCELL to keep the mosquitos at bay, and shooting sticks for your shotgun. Get into the blind well before sunrise and get comfortable—you’re going to be there for a while.

3) Set a decoy spread
Morrett set a spread of three decoys, including a feeding hen, a lookout hen, and a quarter strut jake, about 15 yards away from our blind. The idea is that this pattern hits on both the mating aspect and the pecking order aspect of a mature gobbler’s psychology. I saw first-hand that gobblers couldn’t help themselves from whipping our jake.

4) Let them come all the way in
Both Shelby and Morrett have learned through the years that once an Osceola gobbler locks onto a decoy set, he’ll usually come all the way in. So, let a gobbler work into the spread and square off with your jake decoy before moving for your shot. Once the gobbler engages the decoy, you can move your gun, flip your safety off, or draw your bow. But when a gobbler is still moving toward the spread, he’s on alert looking for danger. Set up with your gun pointing at the decoys and wait it out.