Training Tips: Teach Your Dog to Follow a Scent Trail

In the week or so since our last [NAHRA test](hyperlink:// http//www.outdoorlife.com/blogs/gun-dogs/2011/05/introduction-trailing), I’ve been laying scent trails for Kona to follow.... 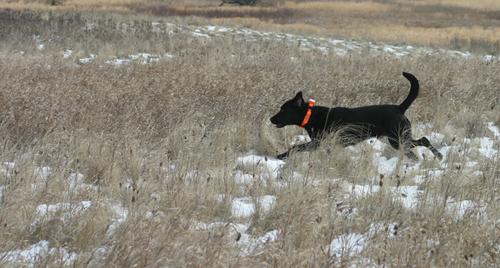 In the week or so since our last [NAHRA test](hyperlink:// http//www.outdoorlife.com/blogs/gun-dogs/2011/05/introduction-trailing), I’ve been laying scent trails for Kona to follow. “Find it” has been the cue for Kona to use his nose and follow the trail regardless of my location.

He’s been getting better and is working independently; trusting his nose and following it without so much hunting behavior. Here are some more tips that I’ve found useful if you’re laying a scent trail:
**
They’re all different**
Watching Kona work trails, I was a little concerned that he was just sort of following a general idea of the scent trail and was still hunting. His head was up and he running; almost like, but not quite, hunting. When I asked pro trainer Dan Hosford about it, he said: “Dogs have three ways of following a trail: they’ll keep their nose tight to the ground and sniff it all the way, or their nose will be 3 or 4 inches up off the ground as they follow or they’ll carry their head high and almost quarter the trail as the scent comes rolling off the grass.”

Kona almost always falls into the head held high category, although sometimes, especially at the beginning of the trail, keeps his nose close to, but not completely on, the ground.

“A lot of it is the dog’s individual personality and what he finds as the easiest way to capture and stay in the scent cone,” said Hosford. “A lot of it also depends on the moisture on the vegetation and the wind. The more damp the grass, the easier it is for the scent to carry up the stalks and the dog can keep his head up more. The dryer the grass, the more he’ll have to work close to the ground to puzzle it out.”

Praise effort
Once you release the dog with his cue word, watch his body language and encourage him as he works out the scent trail and direction, but don’t overdo it or else you might pull his attention away from the task at hand.

“You have to have some kind of encouraging word so that the dog recognizes and understands that you recognize his effort. You don’t need to be sucking up but encourage him just enough to stay working at his present pace to accomplish the task,” said Hosford. “As long as you can see him giving an effort to find the scent cone, keep encouraging him. Once he’s found and is following the scent, be quiet.”

Hosford said that you need to keep quiet so that the dog stays focused. If you continue to encourage with the cue word/phrase or praise the dog, it can create conflict in his mind and distract him from working. “The focus comes off the scent and back to the command,” he said. “It’s a sensitive game between encouraging and distracting him to the point that he quits trying.”

Watch the wind
Like Hosford said in the trailing video in the prior blog post, lay a trail with the wind or quartering the wind. That way the dog doesn’t just following the airborne scent cone coming directly off the bird. Force him to use his nose and the ground scent left behind by working with the wind.

After the dog starts to understand following the trail, incorporate turns that again quarter the wind or move with its direction. “L-shaped” trails are great starting points and you can repeat the “L” so that you create a stepped trail that makes it easier to define if your dog is actually following scent or just running in a general direction. “U-shaped” trails work well, too, but again, watch the wind and how the final resting spot will influence the trail; you don’t want the bird’s scent cone to wash back over the working trail but want it going downwind.

Use flagging
Fluorescent orange flagging tape works great for not only blinds and marking bird locations, but it’s perfect for defining where trails turn. You can then visualize more accurately how the scent is traveling in the wind and the path of the dog’s travel. You’ll be able to more definitively tell if the dog is following the trail, and not just stumbling around, because he’ll turn somewhere near that orange piece flagging.

Use the bird
A big bird like a duck really lays a good scent trail. Use a bucket with water in it to soak the bird and leave a nice strong scent trail for the dog. Re-wet the bird while laying the trail if you have to; a strong track will help keep the dog working and encourage him to trust his nose and raise his confidence level. Likewise, pull a breast feathers out to mark the beginning of the track and leave a few feathers en route to the final resting spot to keep the dog confident and working.
**
Praise success**
When pup finds the bird, lavish him with praise so that he knows you’re pleased. When he returns to you with it, allow him to hold the bird for a little bit while you pet and praise him some more. It will help cement the good work in his head and create a positive association of working through a trail with not only a bird, which is the ultimate prize for a well-bred bird dog, but also praise from you, which is almost as important. That will make the work fun for the dog and it will be something he will want to repeat, and he’ll do it enthusiastically.