Locals call it the “Lunch Counter,” but you won’t find that name on any map. It’s a soaring plateau of... 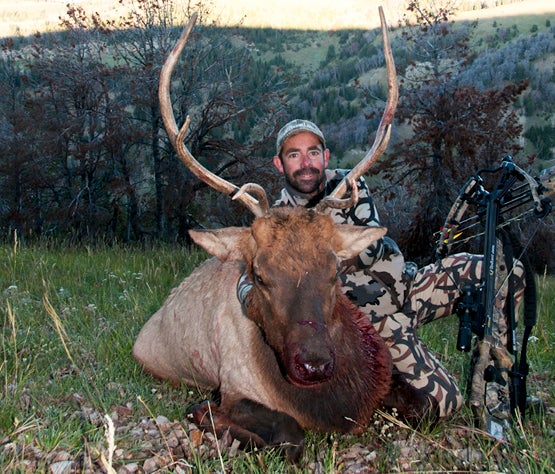 Locals call it the “Lunch Counter,” but you won’t find that name on any map. It’s a soaring plateau of wind-blasted limestone and withered wildflowers that, at 10,000 feet above sea level, presides over a confusion of lesser ridges that march west into Idaho’s Snake River Plain.

A rumor of elk–told to a friend who told a friend who told me–has brought me to this southwest corner of Wyoming. The topography that appealed to me on maps is confirmed by the view from the trailhead. If I can grind my way to the top of the Lunch Counter, I should find a wide, grassy, miles-long mesa, a table whose top stays well above the tree line but whose shoulders drop into dozens of timbered drainages.

In September, these shaded pockets should be full of cows and their yearling calves, tended by amorous bulls ramping up for the rut. Hence the name. It’s a place to go to spear a meal, or a year’s worth of meals, with the business end of a broadhead.

Most hunters use pack stock to traverse the winding trails and stunted timber that flank the reef, but I’m determined to scale the ridge on my own power, with a trio of friends from the Midwest–Kim, Mark, and Toby–and enough provisions in my backpack to stay awhile. This is how I prefer to hunt elk, free to roam where the animals are.

This is a place suited to my style. Non-residents are required to hire guides to hunt big game in Wyoming’s wilderness areas, but this corner of the Bridger-Teton National Forest is one of the state’s few backcountry ­areas that’s not designated wilderness, which means I can hunt on my own. I don’t need an outfitter so much as an opportunity, and I have it in the form of a general elk license, a week to hunt bulls at the height of the September rut, and a crossbow.

Wyoming is one of the few Western states that permit crossbows to be used in the archery season. It’s not a new allowance; horizontal bows were classified as archery equipment back in 1977, and in most years around 15 percent of Cowboy State bowhunters hunt elk with crossbows.

This year, I’m one of them, but I’m also a skeptic. My backcountry strategy is to travel light, to live with the elk until I can kill one of them. My backpack and its contents–including stove, sleeping bag, bivy sack, raingear, extra clothing, and dehydrated food–weigh less than 20 pounds.

My compound bow tips the scale at 5 pounds with a full quiver of arrows. Even though its woven carbon-­fiber limbs are designed to reduce weight, my TenPoint crossbow weighs well over 10 pounds with all its accessories. It seems even heavier.

It’s not until I’m miles up the trail, my crossbow lashed to my pack and my thighs starting to burn from the elevation gain, that I recognize another inconvenience of the bow. It’s wide, the horizontal limbs catching every pine branch and trailside bramble I pass. Kim and Mark are also carrying crossbows, seemingly with less effort than I’m expending. I adopt their method, carrying my bow in one hand, but the weight and T-shaped configuration become onerous. I try strapping it to my pack with one limb jutting forward over my head, but it’s unwieldy and unbalanced. But I’ve made my decision to hunt with this implement, and as I climb through groves of whitebark pine and quaking aspen with their golden leaves fluttering, it is literally my cross to bear.

As it turns out, I should have been less concerned about unimpeded walking than finding water. Because my maps showed water sources in little pockets at the heads of drainages, I brought only enough drinking water for a single day. I figured I’d filter water where I found it in the course of elk hunting.

But this is limestone country, porous as coral, and I fail to strike water for two parched days on top of the Lunch Counter. Finally, at the very bottom of a pitched slope that reeks of rutting bulls, we find water in a tiny clear pool in a cleft of solid granite. I filter enough to fill every bottle and bladder I have, and then I inspect the elk sign. It’s fresh, no more than an hour or two old, and my hunting partners and I spread out and call. We get an immediate response, the raspy bugle of a mature bull, and we set Kim up to shoot.

It’s here, in the intensity of the moment, that I recognize another liability of crossbows. They’re cumbersome and take time to deploy. Crossbows are perfect for sedentary styles of hunting, for ground blinds and tree­stands, where hunters can wait for game to approach. Besides mobility, elk hunting requires the ability to set up in an instant and remain motionless as a bugling bull bears down. As Kim cranks her crossbow to full draw, settles an arrow on the rail, and adjusts her scope, I fear the bull has lost interest or seen some movement.

But it’s also here, on a steep sidehill in the heart of elk country, that I come to appreciate a fundamental value of a crossbow. It’s democratic. It allows Kim to hunt rutting elk. She weighs maybe 100 pounds soaking wet, and she’s not powerful enough to draw a heavy compound. But the crossbow, with its mechanical draw assist and ability to hold an arrow at full draw without kinetic arm strength, allows her to be here, at 10,000 feet above sea level, a bugling Wyoming bull just on the other side of the trees, her chest heaving with expectation and adrenaline.

We don’t get a shot at that bull, or the next one that answers our call. That’s the nature of bowhunting. But here at the roof of the Rockies, there is always another drainage to work, another bull to call.

After three days we are running low on food, so we trek down to base camp, get a propane-powered shower, a hot meal, and more provisions. The next day, I trade companions, picking up Jim Sloan–a Michigander with limited backcountry experience but plenty of enthusiasm and bowhunting credentials–and again assault the ridge.

This time I know what to expect, and I pack plenty of water. We hike miles along the length of the Lunch Counter, to a network of secondary ridges that seemed to always hold bugling bulls earlier in the week.

Jim and I drop our packs at a natural pass connecting drainages on either side of the main ridge. This will be our satellite base camp, and we hang our packs and overnight gear in trees in case we’re visited by a curious bear. We pare our run-and-gun possessions down to the basics: calls, knives, headlamps, snacks, and water. And our bows. I’m carrying my TenPoint; Jim Sloan shoots a compound.

Before we set out for the afternoon, we strategize. I’ve been shooting my crossbow out to 60 yards and feel confident taking a shot at that distance. Jim is good inside 30 yards, so we divide our world into compound and crossbow shots and head out from camp.

It’s not long before we strike a young bull, right on the trail in front of us. We set up and call, but he joins a larger herd of elk that stays just ahead of us, leading us into a hellhole of baking-hot scree slopes and blowdown bowls of broken timber.

Calls aren’t turning any of these bulls, so we surge to get ahead of them, lungs searing with thin-­oxygen exertion.

As I scramble to cut off the bulls, I encounter another perplexing detail of mobile hunting with a crossbow: when to cock it. Up to now, I’ve been hiking with my bow uncocked. My main concern is safety–I don’t want to catch the string on a limb or a rock and have its 185 pounds of draw weight snap unexpectedly. I also don’t want to move across this steep landscape with a broadhead-tipped arrow on the rail.

But now, I need to cock and load the bow before I crest the hill in front of me if I want any shot at the bull I’m sure is within range on the other side.

It turns out the bulls are gone, so I shoot my arrow into a rotten stump to decompress the bow’s limbs. Jim and I are similarly undone by the unfulfilled intensity of our afternoon. We hike, sweaty and weary, back to camp. But that night, as I tuck into my bivy sack and marvel at the stars wheeling over the Wyoming Range, I somehow know that tomorrow is our day.

Opportunity comes sooner than I expect, in the morning, only a couple hundred yards from camp. A young bull is thrashing a pine sapling with such gusto that we hear him before we see him. We creep to the edge of a clearing where we can spot him. He’s no giant, but he’s a legal bull on public land. We’ll kill him if we can.

Keeping just out of his sight and hoping the wind continues to blow our scent away from the bull, I send Jim down the trail. I stay farther upslope, in case he comes my way. Silently as I can, I cock the crossbow, pluck an arrow from the quiver and fit it on the rail. Then I deploy a monopod attached to the bow and range my distance. If the elk comes into the clearing below me, I’ll have a 40-yard shot. I see Jim setting up downhill. If the bull flares from my call or if the wind switches and betrays me, he’ll have an easy 20-yard shot.

The bull stops shredding the tree at my first cow call. He’s not committed, but at least he’s not spooked. I mew again and the bull comes my way, head thrust out, ears forward, steps short and deliberate. He’s interested, but nervous. He stops only to thrash another sapling and then he’s mine.

I know I’ll kill him even before he enters the shot zone. If I were shooting my compound, I’d be a nervous wreck, shaking as I held my bow at full draw, waiting with fraying nerves and wildly firing synapses for the shot. This is where many bow shots are muffed, in these last anxious moments of a hunt.

Instead, I’m locked, loaded, and strangely calm when the bull steps from behind a tree. I stop him with a chirp. I feel the string snap and the push of the slight recoil into my shoulder.

Through the crossbow’s scope, I see the arrow in flight, and then it dives into the chest of the bull, red-and-yellow fletching disappearing into roan hair. The elk wheels and stumbles and then crashes down the steep slope, snapping twigs and limbs, sounding like a piano falling down a flight of stairs.

Then, even before the sun clears the horizon, the ridge is quiet again. I find my red-wet arrow on the edge of the clearing and follow a trail of gore to the bull, dead on the sidehill, less than 100 yards from the point of impact.

My GPS tells me I am at 11,017 feet above sea level. My bloody arrow tells me crossbows are perfectly acceptable elk gear. The cloudless sky tells me it will be a beautiful fall day to spend on the trail, hauling well-earned meat off of the Lunch Counter.