Before Dave “Cozz” Cozzolino began hunting turkeys at age 16, no one ever suspected he had attention deficit disorder. He... 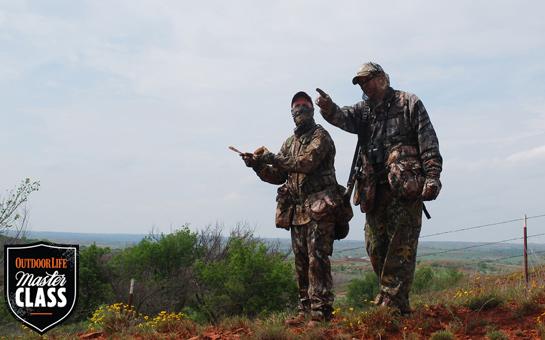 Before Dave “Cozz” Cozzolino began hunting turkeys at age 16, no one ever suspected he had attention deficit disorder. He had no more trouble staying seated at his desk than other students and was no less attentive than the other boys. No, it was the sound of gobbling that stirred Cozzolino too deeply to stay put. Instead of calling and waiting like most turkey hunters, Cozzolino routinely makes hen talk as he moves in on gobbling birds. In fact, he argues that because of his aggressive style, he regularly dupes savvy gobblers that have evaded more patient hunters.

Here are some of Cozzolino’s favorite aggressive tactics. Try them where you have room to maneuver.

1. Don’t Just Sit Tight
Cozzolino moves slowly and quietly through the turkey woods, just as though he were still-hunting for deer. Before he travels far enough to alarm a turkey, he fills the air for an entire minute with aggressive cutting, yelps and short pauses. Then he stops calling for 15 to 20 minutes. During the intermission, he stalks forward about 20 yards. Then he starts cutting and yelping again.

“That’s exactly what real hens do,” says Cozzolino. “They make a racket for a little while and then they quiet right down. The next time they call, they’re in a different spot.”

Cozzolino always calls before walking over a knob or stepping into an open area where a gobbler could spot him from a distance. Because he moves and calls, he convinces any gobbler that’s within earshot that his hen talk is the real deal. The gobbler usually sounds off and gives away its location before Cozzolino moves too close and blows the game.

What about hens that don’t respond to his calling?

“I do spook hens sometimes, but I don’t worry about it,” says Cozzolino. “As long as she isn’t with a tom, that’s just one less hen I have to compete with for a gobbler’s attention.”

When a gobbler does respond, Cozzolino gets it fired up and then moves in 50 yards or so. He sets up there and doesn’t call again. This way the bird won’t know where he is and won’t hang up out of range.

2. Cut the Distance
If a gobbler Cozzolino has set up on doesn’t appear in 20 minutes or so, or if it continues to gobble from the same location, Cozzolino sounds off with another series of calls and moves closer if he can and around the bird if he can’t. Next he gives the tom the silent treatment again. Cozzolino might repeat this call-and-move maneuver several times before the gobbler comes in.

Cozzolino claims calling while moving sounds more realistic to a gobbler because this is how a hen normally acts. He believes educated toms grow leery when they hear repeated calls from hens that refuse to budge.

“If a gobbler won’t come to your calls, you’ve got to go after him,” says Cozzolino. “If you move like a hen moves, and you call like a hen calls, you can get close enough to a gobbler to make him come your way.”

Just how closely Cozzolino crowds a gobbler depends on the cover and terrain. He hunts mainly in wooded hill country and has snuck within 40 yards of stubborn toms before they responded to his calling and offered him a shot.

Thanks to his experience, woodsmanship and superb skill with a mouth call, Cozzolino rarely spooks gobblers. He can duplicate any sound a hen makes, from soft putts and purrs to seductive yelps and fiery cutts.

“Cutting is the biggie for me,” says Cozzolino. “Cutting is real aggressive calling that tells a tom a hen is hot and ready to breed.”

Cozzolino also performs an incredibly realistic gobble with his mouth call. In fact, he behaves like a strutting tom when he does so. He reserves the gobble for instances when he can’t get close enough to a reluctant bird to make it come to him. He says throwing in a gobble with hen talk often fires up the tom’s competitive instincts and brings the bird into shotgun range.

3. Snub a Show-Off
When a tom gobbles repeatedly but stubbornly won’t leave its strutting area, Cozzolino will continue to move to the right or left between calls to give the impression of a traveling hen without getting too close. The terrain dictates his ability to maneuver to intrigue a tom.

If he has gotten as close as possible and has maneuvered all around but the gobbler still won’t come in, Cozzolino backs away, calls and then silently moves forward again.

“Any movement by a hen sounds natural to a gobbler, even if the hen is going the other way,” says Cozzolino. “If a gobbler thinks that the hen is leaving, he might get off his duff and give you a shot. This is also a good time to throw in a gobble to really aggravate him.”

In another difficult situation, Cozzolino regards a gobbler in a field as being especially hard to call because a tom in an opening can easily spot approaching danger. Gobblers in this location often wait for hens to come to them as they strut and show off. If he has backed off and called and still the gobbler won’t budge, Cozzolino really gets creative.

“I can sometimes lure a bird in a field closer to my position by confusing it,” says Cozzolino. “Whenever the bird gobbles, I cut off his call with a short burst of hen talk. I continue doing this as long as he gobbles. If I’m lucky this will be enough to make him unsure about whether he really heard anything.”

After Cozzolino calls while a tom gobbles several times, the perplexed turkey often wanders closer just to confirm that it isn’t hearing things. As a result, Cozzolino says, “The last thing the gobbler hears is the sound of my shotgun. Turkeys are very curious animals. But really, I only use this tactic as a last resort.”

4. Outpace a Runaway
When a gobbler answers and heads in the other direction, Cozzolino assumes the bird is either call-shy, heading for a strutting area or traveling with hens. This challenging predicament puts Cozzolino’s skills to the test.

Using his call-and-move strategy, Cozzolino stalks closer to the bird. Because the gobbler is moving, Cozzolino must exceed its pace to gain ground and get ahead of the turkey. Sometimes this means that he has to move very fast. This can be difficult because if the gobbler is with hens, Cozzolino must elude the eyes and ears of a flock of birds as he gets as close as possible.

“It can get real touchy,” he says. “You have to get close enough to the flock that the tom can come and check you out without actually leaving the group of hens. You practically have to get within shooting range.”

If Cozzolino knows where the gobbler is headed he might try to get there first. Sometimes toms will head straight for the same feeding or strutting area each day. This is where getting out before the season begins and scouting really pays off, says Cozzolino. Each bird has its own territory and comfort level.

If a tom has a harem, then the dominant hen will lead the way. As a result, the tom’s movement patterns may shift as hens leave him and spend more time on their nests. Each time a hen moves off, the next hen in the hierarchy takes charge. This is one reason why Cozzolino gets so aggressive: You never know what’s going to happen on any given day, so you might as well go all-out.

5. Travel Light
Dave Cozzolino doesn’t impede his footloose turkey-hunting style with decoys, a blind or a vest jammed full of calls. He carries only a shotgun, a folding seat and three or four Ultimate Hunting Team Series mouth calls from Knight & Hale. The calls feature a latex that lasts longer and retains its elasticity.

To keep the calls moist, supple and sanitary, he puts them in a round Copenhagen can with a sponge soaked in Knight & Hale’s Yelper Helper. The solution also prevents the call’s reeds from sticking together.