There’s more to fooling gobblers with a diaphragm than just popping one in your mouth and huffing hot air. Sure,... 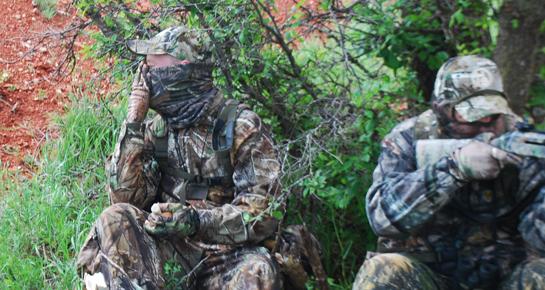 There’s more to fooling gobblers with a diaphragm than just popping one in your mouth and huffing hot air. Sure, at times an uninspired cluck or several monotonous yelps might drag a spring tom to your setup, but common sense and experience will make you a better caller and a more successful hunter.

Why choose diaphragms? Because they offer hands-free operation, make realistic sounds and are the most cost-effective calls on store shelves. To ensure your success this season, practice your mouth calling early and often and follow these tips.

1. COUNT ‘EM OUT
Listen to enough wild turkeys and you’ll hear them call in a consistent, numerical cadence. The hen’s yelp and plain cluck are the two basic vocalizations spring gobbler hunters use. So when you’re mouth calling, make every note count.

On the roost, a hen’s tree yelps can go from just one to a handful of notes. On the ground, a hen’s plain yelp generally consists of 3 to 5 notes, with some situational variations. With more notes, that plain yelp becomes an urgent lost call, and might run from 12 to 20 or more notes. A plain cluck is 1 to 3 notes, while cutting includes 4 to 10 or more notes in rapid succession.

Vary the number of yelps and clucks according to the hunting situation. If you want to sound like a relaxed hen letting a tom know her location, call with just 4 to 5 notes. If you want to add urgency to your calling, yelp more. Pay attention to real hens when they call and learn to mimic their sounds note for note.

2. GET RHYTHM
Mouth-call yelps and clucks need to follow a rhythmic pattern. Typically, a hen’s yelps are made in evenly paced beats, while clucks are more erratic and staccato in nature. Whether that wild turkey is roosted, on the ground or lost (looking for flock mates), those yelps are steady. In contrast, both the hen’s cluck and its cutting are notably varied. The rhythm is irregular and even increases with frequency as the turkey grows more excited or agitated.

It’s important to note the distinction and use the right rhythm with a particular call.

3. MIMIC NOTE LENGTH
Listen to a yelping hen and you’ll hear three or four notes per second in a series: yawp-yawp-yawp. A plain cluck—pock—is often brief. Cutting might include several to as many as a half-dozen notes per second in rapid-fire sequence. Again, match the note’s length when making a specific call. Jakes also yelp a lot, but often have a coarser tone that rolls over, as if the bird wants to gobble at the end. In fact, sometimes he does.

4. SET YOUR VOLUME
A hen’s tree yelping is often faint and muted. It’s best heard in range of a turkey roost. If a gobbler’s nearby, his rowdy response might come then. Plain yelping after a hen has flown down is typically nasal in quality. A lost yelp is louder and less subdued. The tonal urgency is easily heard. Practice these variations and use them appropriately. As a gobbler nears or is roosted in a tree not far away, keep the volume of your calls low. A loud call when a tom is in close can spook him and send him running.

5. SPACE IT OUT
Turkeys that are looking for others often cluck, wait one, two or even three or more seconds, then cluck again. This spacing distinguishes the plain cluck from cutting.

A plain cluck asks, “Where are you?” when looking for a response from another turkey. In that moment, you can wait silently and let the bird look for you or answer right back. Space those clucks to mimic the bird that’s approaching. Once you call, that turkey has likely fixed your position, so don’t call once the bird is close and in sight.

You can, however, cluck to soft sell an interested tom into slinking into range. While often only a single note, it’s an important attention-getting vocalization for turkeys.

Cutting reflects a series of abrupt and excited clucks performed in quick succession. A pause of only a second or two should come between each series of harsh cutts.

6. MAKE THE PITCH
As mouth calling goes, pitch is the high or low tone within a range of specific calls. A hen’s yelp is higher pitched than a gobbler’s. Clucks—both plain and those made when cutting—should reflect the same pitch. Contest callers often vary the pitch when cutting, but if you listen to wild turkeys, chances are you’ll hear otherwise.

Mouth It: Ask your turkey buds what they say when yelping, and the answer will likely vary. “Chick,” “chirp,” “chop” and “chalk” are some options, with “ch” as the common sound. Some say “shuck” or “shock” or “shick.” Others say “chee-uck” when making the yelp. Whichever way you go, call with snapping, beak-like lips, just like a turkey. To practice, choose a single word: “shock.” Break it: sh-ock. Then roll it together as you yelp: s-h-h-h-o-c-k, shhh-ock, shock. Experiment with different words to get the sound you want.

Make a Cluck: To cluck on a mouth call, say “pock,” “puck,” “tock” or “tuck” with one short burst of air. To cutt, run those clucks together in a fast series: “tuck-tuck-tuck-tuck.” Vary the cadence to imitate live hens you hear when hunting. Mix clucking and cutting with your yelping for added realism.

Mix It Up: You can combine diaphragm yelping with pot-and-peg or box-call vocalizations. If the weather’s stormy, it will help you call through wind gusts so a gobbler might hear you. You can also imitate several turkeys this way. Sometimes, that’s what it takes.