Turkey Hunting Tips: How to Take Down the King

The gobbler was, hands down, the worst-looking bird I had ever seen in the woods–bedraggled, war-torn, beat up. Though he... 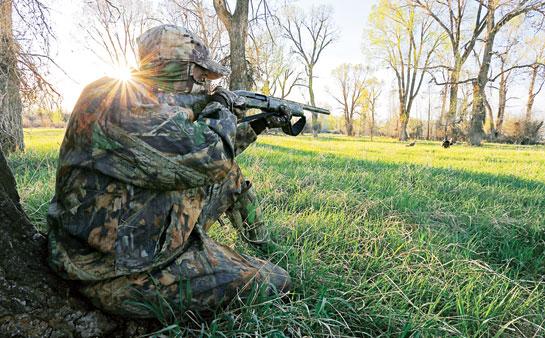 The gobbler was, hands down, the worst-looking bird I had ever seen in the woods–bedraggled, war-torn, beat up. Though he had four hens, I was convinced that the tom was one of those loud-mouthed 2-year-olds that had gotten his butt kicked for trying to lay claim to a more dominant bird’s territory. Missing his center tail feathers, the bird sported a short, wispy beard and rarely gobbled unless he was in a tree.

While scouting him one morning, I spied two adult gobblers attempting to join Mr. Tailfeather’s party. He would have none of it. The gobbler’s demeanor changed the instant those toms stepped into his field. First he began gobbling–often, hard, and unprovoked by hen calling. Then, the race and subsequent beat-down was on. He quickly vanquished the intruders. He was the king, a fact confirmed two weeks later when I ground-checked his spurs. That pathetic-­looking turkey sported the sharp, 1 ¼-inch hooks of dominance.

Anyone can age a turkey once he’s in hand. It’s a bit trickier to judge whether a gobbler you are hearing, seeing, or calling to is a dominant bird–a trophy turkey. I now know what I should have been looking and listening for.
**
Listen to the Gobbling**
Volume and tone are the first, but not only, considerations. Certainly, most adult birds gobble more loudly than jakes. However, the difference between the gobbling of a young adult and a mature stud is also noticeable. If you get close enough to hear a dominant bird in the roost, you will notice an appreciable rumble at the tail end of his gobble–a sound missing from the gobbles of 2-year-old birds. Like drumming, the rumble emanates from deep within its chest.

Remember, too, that in the world of gobbling turkeys, quantity does not necessarily connote quality. Two-year-old turkeys are gobbling fools. If you happen to be on an incessant yodeler, chances are that you’re listening to a young longbeard. If several adults are roosted together, you can pretty much bet that it’s a pack of 2-year-old running buddies. In that case, be sure to also listen closely to what is happening elsewhere and how the birds you’re set up on react. If a distant gobble shuts down other birds, you can bet that he’s a stud. Save your second tag for him.

Body Language
Gobbling certainly contributes to establishing hierarchy in the wild turkey’s world. However, the vast majority of what a gobbler “says” is communicated through body language. If you’re fortunate enough to spot a group of gobblers in the spring as they approach a hen or come to your calling, look for the longbeard that does all or most of the strutting. He is the dominant bird. The other gobblers will often strut, too, but not as long or as fully fanned. The stud gobbler may not come out of strut at all. Another clue to understanding the pecking order is to watch for attacks from the dominant tom toward other gobblers. The big boy may chase the others, or he may just turn their way, causing them to move off or break strut. His head, neck, and caruncle coloration are also likely to be completely white. Submissive birds will have a red head.

Finally, be sure to bring along a binocular. The long, curved spurs of a dominant gobbler are difficult–but not impossible–to spot amid the fast-growing grass of spring.