New Riflescopes 2013: OL Reviews and Ranks the Best Scopes of the Year

If submissions to this year’s riflescope test are any indication, the confluence of the tactical and the sporting may finally... 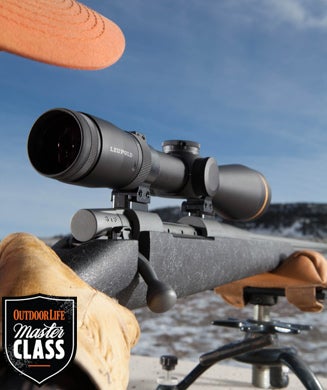 If submissions to this year’s riflescope test are any indication, the confluence of the tactical and the sporting may finally be slowing. For the first time in several years, the number of scopes in the field designed mainly for hunting exceeded those configured specifically for shooting.

Of course, any capable optic can bridge the two disciplines. But some riflescopes–such as Nikon’s new M-308, with a holdover reticle tuned to .308-class ballistics–are designed to fill a specific, albeit robust, niche occupied by target shooters. Other scopes with attributes that lean toward tactical shooting include Konus’ disappointing Konuspro; the 1/8-inch-click Targetmaster from newcomer NikkoStirling; the 34mm, 2-pound Triple Duty behemoth from Sightmark; and Vortex’s tight, bright 1-6x Razor HD, a 30mm gem that would pair well with any AR. The most remarkable of what I’ll call these entry-level tactical scopes is Redfield’s $250 Battlezone. Although it’s optically hideous, this 1-inch scope won our favor because it ships with not one but two ballistic turrets: one tuned to the drop profile of the 55-grain .223, and the other configured for the 168-grain .308 match load.

The only bona fide tactical riflescope in the test this year was Bushnell’s Elite Tactical XRS (shorthand for “extreme-range shooting”), a massive 34mm scope with a remarkable 6.6X power range and a first-plane milling reticle that has all the durability and heft you’d expect from a 2.3-pound battle optic. The more purely hunting scopes run the gamut from the accessible–Weaver’s low-profile, redesigned Grand Slam ($415) and the lovely illuminated Meopta Meopro RD ($799), built on a sexy 1-inch tube–to the investment-grade. This latter category includes the stylish Minox ZE5i, a big 50mm illuminated hunting scope ($1,599); and the 56mm Nighthunter Xtreme from Steiner, which retails for a shocking $2,300 and features a complicated illumination system.

In between these extremes are some remarkable hunting scopes. They include the Austrian Kahles KXi, an illuminated 1-inch scope that retails for $1,500; the award-winning Leupold and Burris riflescopes; and Zeiss’ new mid-level scope. This optic, the Conquest HD5, retails for $1,000 and has some noteworthy features, including a big 5X magnification range contained in a sleek 1-inch tube, zero-stoppable turrets, and a precise side focus.

The optics are so good in this latter class of “hunting” scopes that they would be at home on any long-distance precision-shooting range, more proof that the gap between “shooting” and “hunting” scopes is slimmer than some marketers would have us believe.

The riflescope industry’s race to ever-broader magnification ranges has benefitted hunters and shooters who want a single optic capable of delivering wide fields of view and bright images at low powers, but also precise aiming points on distant targets at the upper end of the power range. The casualty of this race has always been style and proportion.

Many of the variable-power scopes with wide magnification ranges are, in a word, ugly. They feature oversize eyepiece units and ever-larger tubes to accommodate the complicated power-changing mechanism. Leupold’s remarkable new 6X magnification riflescope defies that trend. The VX-6 is a well-balanced, lovely scope that would dress up any rifle.

But the Leupold’s substance exceeds even its noteworthy style. Its mag range delivers an image that’s crisp and bright from 3X all the way up to 18, and its finger adjustments are precise and positive. Both the standard elevation control and the custom turret we requested for our .308 Win. control rifle performed well, and we appreciated the large, easy-to-turn controls.

The scope’s low-profile turrets and compact focus knob are in proportion to its 30mm tube. Leupold has incorporated one of the industry’s most user-friendly illumination systems in the left-side focus turret. Called FireDot, it lights up a center aiming point with the push of a button, and shooters can easily adjust its intensity by continuing to push the control. A motion sensor shuts off the unit after a period of inactivity but restores the illumination when the rifle is again leveled at a target. Optically, the VX-6’s lenses are bright, crisp, and well coated. The scope turned in the field’s top resolution score–the best indication of glass quality–but finished in the middle of the pack in our low-light test.

With a retail price of more than $1,600, this is not an entry-level scope. But given all its features, one can make the case that the VX-6 is a relative bargain for a big, serious, lovely, American-made optic.

Configuration: 3-18×50
Price: $1,625
Overall Score: ★ ★ ★ ★
Optical/Mechanical Quality: B+
Perceived Image: A
Performance: A
Design/Durability: A
Price/Value: B+
Final Verdict: Light, bright, stylish. One of the great optics of our time

Optically, this scope is essentially the same as Burris’ utilitarian Fullfield E1. But the company has added a shooter-friendly feature–a custom elevation dial calibrated to a specific caliber and bullet type–that allows the user adequate long-distance precision at a fraction of the price of a true tactical riflescope.

The scope’s name references this new feature (C4 stands for “Cartridge Calibrated Custom Clicker”), and one reason the Burris wins our coveted Great Buy award this year is that the custom turret is free (buyers submit their ballistic information and Burris returns a turret). Normally this feature is about a $100 upsell. For our test model, we ordered a turret tuned to Federal’s 168-grain match load in .308 Win., and found the calibration spot-on at 300 yards and only slightly off at 500 yards.

The 42mm Burris scored near the top of the class in both our low-light and resolution tests, and testers liked the ample mounting dimensions on the 30mm tube. They also praised the reticle, which features hold-off references for windage. Panelists didn’t like the focus control, located on the scope’s objective bell, and had gripes with the elevation turret’s lack of a zero-stop or other indication to let you know when you’ve made a full rotation. With the addition of a reference mark for zero, this $400 riflescope will be an even better bargain.

Configuration: 4.5-14×42
Price: $399
Overall Score: ★ ★ ★ ½
Optical/Mech. Quality: B
Perceived Image: A-
Performance: B
Design/Durability: B
Price/Value: A
Final Verdict: A zero-stop on the elevation turret would improve this scope.