A Minnesota man with a criminal history is suspected of illegally killing a massive-racked whitetail buck that could be the... 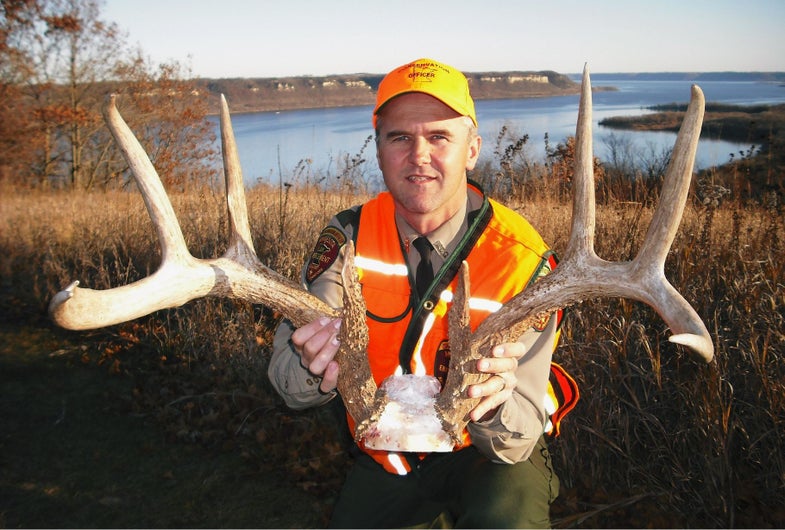 A Minnesota man with a criminal history is suspected of illegally killing a massive-racked whitetail buck that could be the largest 8-point ever recorded.

Last week, Minnesota conservation officers seized the antlers involved in the case and on Thursday, Nov. 12 filed charges against Troy Reinke, 32, of Cannon Falls, Minn. Reinke was charged by the Goodhue County Attorney’s Office with 13 counts, including exceeding his limit and failure to register a deer.

According to the complaint, Reinke admitted to conservation officers that he shot a small doe and a small buck on separate dates in early October, and failed to tag or register either. Reinke said he shot the large 8-point buck, on Halloween evening.

State conservation officers confirmed that a scoring form utilizing Boone and Crockett measuring indicated the deer had a gross antler score of 190 5/8 and net score of 185. The only deduction was a small “kicker point” on the rack’s right side.

Though there is no specific Boone and Crockett category for 8-point whitetails, the largest 8-point typical on record was taken in Michigan and scored 183.

“And it’s just a rack you’ve got to see to believe,” Corcoran said.

During their investigation, conservation officers seized a bow, two deer racks, the meat from the three deer, and the hide from the large buck.

Related media reports coming out of Minnesota indicate that Reinke has previous convictions for domestic assault, theft and fishing with too many fishing lines. According to court records, he served 120 days in jail recently for his second domestic assault charge.

Officially, Reinke has been charged with:

– Two counts, misdemeanor, take or hunt deer without a license.

If convicted on all counts, Reinke could face $19,000 in fines, up to a year in jail and revocation of his hunting license.

Investigating officers said they were initially alerted to the alleged poaching through a tip from a concerned sportsman.

A trial date has not been set.