“I didn’t realize it was a world record barra, but I knew it was a snodger.” I’m not exactly sure... 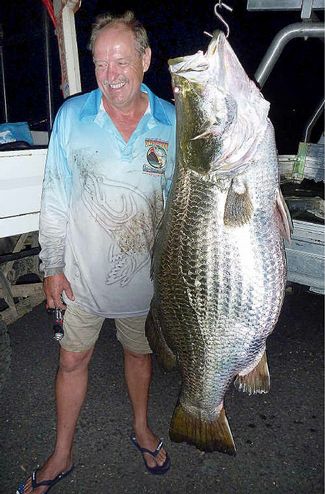 “I didn’t realize it was a world record barra, but I knew it was a snodger.”

I’m not exactly sure what this quote from Denis Harrold means but as he exclaimed it after reeling in what will be the new world record barramundi, I’m sure it conveys excitement.

Where they use words like “barra” and “snodger” and apparently have replaced the letter “Z” with the letter “S.”

Unfortunately for me, Australians also use the metric system which means I have to do math to covert the measurements to standard for my readers.

Oh well, on with the show.

Last week Denis Harrold was fishing from his kayak on Lake Monduran in Queensland when something big struck his “slow-trolled 130 Squidgy slick rig soft plastic in black/gold colouration.” NOTE: Australians also like to throw an unnecessary “U” into words that contain an “err” sound such as “favor” and “color.”

Once hooked, the giant quickly ripped through 80m (about 262 feet in the real world) of 30-pound braided line before crashing across the lake surface. “When I heard it crash, I knew it was a big fish,” Harrold detailed to the Australian media before throwing out his “barra” and “snodger” comment. Harrold’s monster weighed an incredible 44.6kg (about 98 pounds) and measured 135cm (almost 4 ½ feet). Its girth was an astounding 107cm (about 3 ½ feet). This beat the previous barramundi record taken in 1999 from Lake Tinaroo, Queensland by almost 7kg (I’m through converting numbers).

Although excited by his new record holding status Harrold insists that his catch can be topped.

“There are bigger ones out there all right,” he said. It is not known whether Harrold threw his catch on the Barbie.