Bowfishermen and fellow firefighters Robert Belk, Randy Rippy and Belk’s son Talor teamed up to take what will likely be... 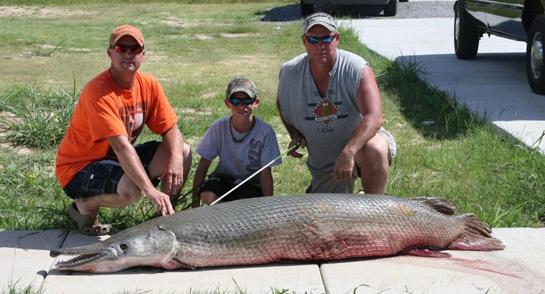 Bowfishermen and fellow firefighters Robert Belk, Randy Rippy and Belk’s son Talor teamed up to take what will likely be the state’s record alligator gar Friday on the Yazoo River. The prehistoric-looking mammoth measured 7-feet, 2-inches and weighed 234 pounds.

Outdoor writer Bobby Cleveland with the Jackson Clarion Ledger reports that the two angling buddies had fished the Yazoo for bass the previous day when they spotted numerous longnosed gar, a favorite target of southern bowfishermen. Belk is past president of the Mississippi Bowfishing Club and Rippy owns a made-for-bowfishing, 16-foot rig.

“When we saw all those gar, well, we knew what we were going to be doing on Friday,” Belk told Cleveland.

When the huge alligator gar first showed itself, Talor Belk, 11, took the first shot with his bow, but the arrow merely bounced off the big fish’s head.

When they caught up with the fish again, the two firemen instinctively drew and shot, hitting the gar with their bowfishing arrows simultaneously.

“He didn’t like those arrows, and he took off down the river and got in the current,” Belk said.

The men were finally able to get a rope around the huge fish and wrangled it into the boat.

The fish also exceeds the rod-and-reel record of 215 pounds, set by Earl Stafford of Natchez in the Mississippi River in 2003.

Commercial fisherman Kenny Williams of Vicksburg landed the standing all-time world record alligator gar in Mississippi earlier this year. Because it was caught in a gill net, it does not qualify for either the trophy or rod and reel division